Hello, friends. I'm at a loss for words after the (unfortunately) all-too-believable bullshit that went down in Charlottesville, Va., last weekend. Feeling tongue-tied is shitty for a writer. But you know what's even shittier than that? Hatred, bigotry, ignorance and intolerance. But, since this is a music column and not a political one, I'll segue out of what could become an incensed rant and instead focus on a pretty cool benefit concert happening this week.

Refugee Outreach Club, a Chittenden County organization, is hosting its first-ever public benefit concert on Friday, August 18, at ArtsRiot in Burlington. Burlington-based West African funk-fusion band Sabouyouma provide entertainment. If you haven't laid your eyes and ears on their energetic blend of traditional polyrhythms and reggae-infused jams, this is an especially worthwhile time to do so.

"We know firsthand the incredible education and experience that culture exchange can provide," writes Sabouyouma drummer and manager Jesse Rosenfield in an email to Seven Days. Given the club's mission, it seems like a perfect match.

R.O.C. began in the spring of 2015 as a student-led club at Champlain Valley Union High School and has since become a thriving, fully licensed 501(c)(3) nonprofit. Its founder and executive director, 18-year-old Natalie Meyer, started the organization as a school club during her sophomore year. She'd spent time abroad in Ghana with Global Leadership Adventures, which connects teenagers with volunteer opportunities all over the world. Seven Days recently caught up with Meyer by phone.

"I wanted to get high school kids involved in the international community," she said. But she had no idea how quickly the club would expand.

"I did not see any of this happening when I started the club," Meyer added.

R.O.C. currently operates the Heritage Learning Program through which tutors teach refugee students in the languages of their home countries. It also provides a cultural exchange program through which R.O.C. chapters connect with African students via Skype in an effort to build international relationships.

Earlier this year, Meyer returned to Ghana and worked with the aid organization Village Exchange Ghana to create and implement women's empowerment and reproductive health programs.

"We're [starting] a Vermont health care program, as well," she said, explaining that R.O.C. will work to provide free dental care for all refugees in Vermont. "We're [also] working on relationships with a bunch of major technology companies," Meyer added.

So, to sum up, Meyer is one of the most inspiring, accomplished and all-around badass people I've encountered lately. Her organization is doing exactly what we should all be doing: building bridges and supporting vulnerable people in our community and beyond. 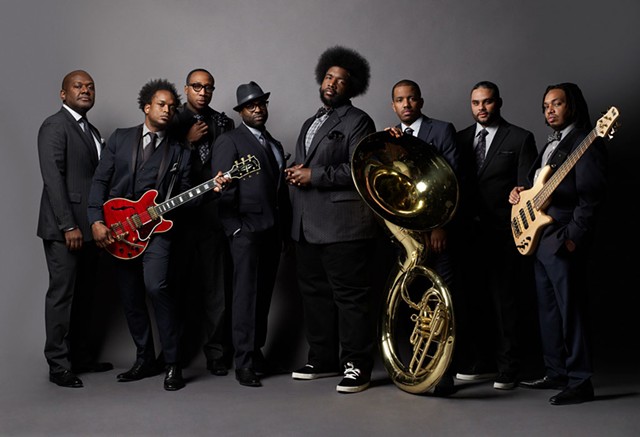 The Turning Point Center of Chittenden County hosts the Abbey Road to Recovery on Saturday, August 19, at Club Metronome in Burlington. Turning Point is a nonprofit organization that offers support and services to those who struggle with addiction. Though not affiliated with any particular 12-step program, it aims to "offer a variety of opportunities and supports to help create an encompassing path to recovery for each individual." Those offerings include athletics, open mic nights, art shows, access to technology and, of course, music events.

The alcohol-free, sober event features Studio Two, the Boston area's premier Beatles tribute act. This particular Fab Four focuses on the band's earlier, pre-Sgt. Pepper's Lonely Hearts Club Band era — which is probably a good fit for this shindig, since the Beatles' later years are sometimes defined by their dalliances into certain mind-altering substances. Methinks "Lucy in the Sky With Diamonds" would not be a great choice for the center's target audience, even if that song isn't really about what most people think it is.

Woodchuck Cider has been one of the area's top purveyors of tasty, fermented libations since the early '90s — long before the 21st-century cider craze. And for the past few summers, the cidery has hosted Ciderstock, a single-day music festival at its Middlebury facility. This year's "ciderbration" is on Saturday, August 19.

In summers past, the fest has packed in some seriously huge talent, such as Cage the Elephant, Dirty Heads and Sublime With Rome. But this year's headliner is probably its most badass entry to date: the Roots. As one of the most visible currently active hip-hop groups — they're the house band on "The Tonight Show Starring Jimmy Fallon" — it's an impressive get. How do you like them apples?

Core members Black Thought and Questlove have been innovative voices in hip-hop since the band's inception in the late '80s, and a new record is allegedly on its way sometime later this year. Maybe they'll grace us with some new music?

The Peacham Acoustic Music Festival returns for its seventh consecutive year. Nestled between the Groton State Forest and Danville in Vermont's Northeast Kingdom, Peacham is a darling little slice of rural Vermont and an all-too-perfect place for a festival that focuses on old-time music, dance and culture. The festival starts on Friday afternoon, August 18, and runs through Saturday evening at various locations around Peacham's town center.

You'll definitely want to scour the itinerary, because there's a heck of a lot to see and do. You can take a crash course in contra dancing, get your hands on some new music makers in the annual "instrument petting zoo" and, as always, see a ton of music. Highlights include Nashville picker Mean Mary, Brattleboro vocal folk trio Low Lily and eclectic Burlington roots trio Pete's Posse. And speaking of Pete's Posse, be on the lookout for a review of their new album, The Conversation, in next week's paper.

Be sure to check out pamfest.com for more info and a full schedule of events.

The Police, "King of Pain"

Cherry Glazerr, "Told You I'd Be With the Guys"

Fridge and the spin$, "Bom Dizzy"

Miike Snow, "I Feel the Weight"