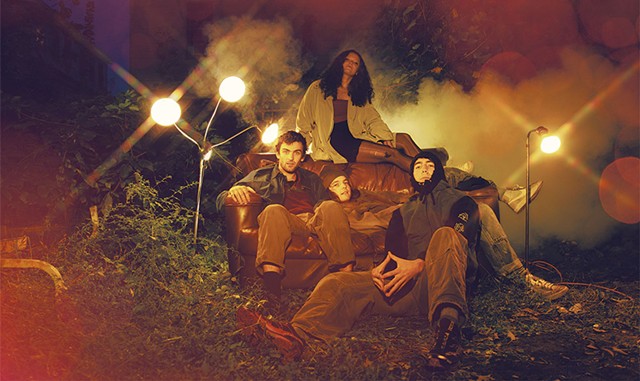 When you really think about it, band names are pretty weird. Yeah, maybe the Beatles became the biggest cultural game changer since baby Jesus, but in the beginning, they were just four kids who named their little rocker gang with a pretty stupid pun. Many great acts in music history have truly awful names. I still laugh when I recall that Pearl Jam isn't only one of the worst band names of all time; they actually changed their band's name from Mookie Blaylock to Pearl Jam, as if that were an improvement.

Some music icons were originally known by another, often worse, handle. R.E.M. were going to call themselves Cans of Piss. The Supremes first played under the moniker the Primettes, a nod to the Temptations, with whom they often shared the stage and were themselves initially called the Primes. Even worse? Destiny's Child used to call themselves Girls Tyme, for fuck's sake. Hot tip: Don't let your parents name your band.

The important thing to remember is that many of these bands came to realize that their name didn't reflect them. Burlington indie rockers Guy Ferrari found themselves in that very circumstance. After a few years of gigging hard around New England, the post-punk-leaning band decided that a pun on a meme-worthy celebrity chef and a famous sports car maybe didn't represent its music.

"When we initially named the band Guy Ferrari, honestly, I just really liked the way it sounded phonetically," singer and rhythm guitarist Nina Cates revealed as she and band cofounder and drummer Zack James chatted with me at a local coffee spot. "I didn't really think about all the Guy Fieri memes or any of that."

"Search engines are tough, but people's brains are even tougher to bypass," James added. As the band members began to lay the groundwork for a new album and tour, they realized it was time to make a change. They redubbed themselves Robber Robber — though anyone looking for meaning deeper than that of their previous name will be disappointed.

"It was that sort of thing where we just said, 'Hey, let's go with Robber Robber and not think about it anymore,'" James said. "We knew this was the point to change it and still get away with doing it without all the hassle."

"Our old name just meant nothing to me," Cates said. "When Zack and I started the project, we really didn't take it very seriously. But we are now, so we needed a change to mark that."

James and Cates originally hail from Brattleboro, where they were part of teen-rock outfit the Snaz. After the group of school friends went their separate ways in 2017, both James and Cates headed to Burlington for college. James found himself in high demand as a drummer, joining psych-rockers the Dead Shakers in 2018. He also launched his solo endeavor, Dari Bay.

Yet James and Cates never stopped making music together; they released the first Guy Ferrari EP in 2019. Their 2021 EP, Caldera, raised eyebrows across the Burlington scene, and before long the band seemed to be on every other rock bill in town.

The members' experience with the Snaz, as well as James' tenure in multiple Burlington bands, helped the group hit the ground running.

"I love this scene," Cates gushed. "I feel so grateful to be part of it, especially since some of our best friends are making music that inspires us so much."

One of those friends, Lily Seward of indie rock outfit Lily Seabird, introduced Robber Robber to Benny Yurco. The longtime Grace Potter guitarist and record producer, along with Rough Francis drummer Urian Hackney, are currently working with Robber Robber on a forthcoming LP, about which Cates and James are extremely excited."

"It's such a cool progression, the way we write music now," Cates said. "Zack and I write it all together, which was difficult at first because we had to learn how to tell each other the truth about whether we liked something or not. It was tricky, but I love it. It feels like we really have ownership of these songs in ways we didn't when we were younger."

Though Cates said Robber Robber's new music is "more cerebral and a little post-punk," James clarified that they're not obsessed with crafting a specific sound.

"We don't want to get hung up on all the layers and influences," he asserted. "We just want to get down to the core idea of what we're doing and make the kinds of sounds that we like. It's really pretty simple."

To break in the new name, Robber Robber will hit the road this winter. They'll be touring with Brooklyn garage act GIFT and Brattleboro indie rock group Thus Love, who recently signed a deal with record label Captured Tracks. Fans waiting to hear the new Robber Robber EP can head to YouTube to check out the band's performance at Future Fields studios. The "Bell the Cat" series features three songs performed by the band, including slow-burn rocker "Slalom."

So, everyone, meet Robber Robber — a band you can now enjoy without being reminded of memes! More importantly, it's a band that's evolving by the day.

Songs of the Sea 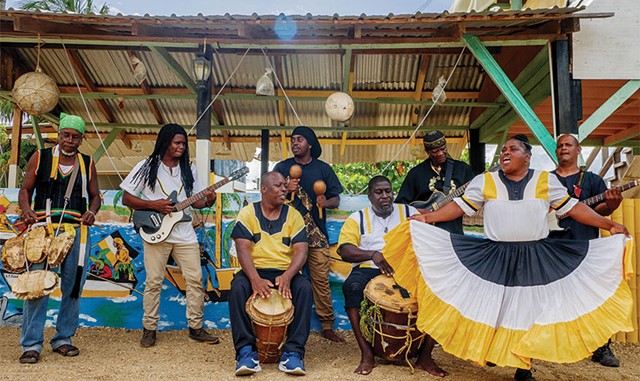 Afro Indigenous ensemble the Garifuna Collective bring the music of Belize and Honduras to Randolph on Saturday, November 5, at the Chandler Center for the Arts. The group, which has played in more than 30 countries on five continents, is dedicated to keeping alive the musical traditions of Garifuna culture, which traces its origins to the Caribbean island of Saint Vincent.

Prior to the concert, Garifuna musicians are participating in a weeklong residency that will take them to schools in East Corinth, Sharon, Tunbridge, Chelsea, Randolph, Braintree and Claremont, N.H. The musicians will speak about their music, Garifuna culture, island history — including that of Joseph Chatoyer, who led the revolt against British colonizers in 1795 — and the displacement of their people to Honduras and Belize. And perhaps they'll mention that, in 2001, the United Nations Educational, Scientific and Cultural Organization declared Garifuna language, music and dance Masterpieces of the Oral and Intangible Heritage of Humanity.

Garifuna's residency is a project of the Chandler Center and Barnard-based BarnArts Center for the Arts, a partnership that shows great potential for both organizations.

"Working together, we are both stronger," said BarnArts director of music programming and development Chloe Powell. "This kind of collaboration allows us to bring in artists for community programs that otherwise would be out of reach for both our organizations." 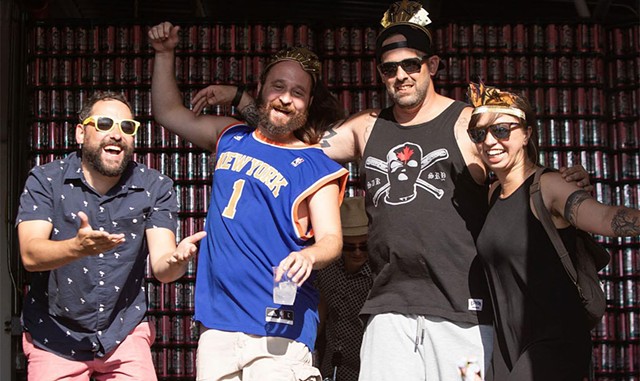 The Jesse Taylor Band are back with a new single. "Unavailable" is a shot of indie rock energy full of big guitars, pounding drums and Taylor's distinctive, often soaring voice. The track is about crushing on someone who is off-limits. Taylor leads her band through a hook-laden jam bristling with riffs as she laments wanting someone so "unavailable, so relatable, unattainable / You don't even know what you're doing to me." Recorded with Rough Francis drummer/producer Urian Hackney and mixed and mastered by Joe Egan, "Unavailable" is ferociously catchy. Check it out now, streaming on all services.

Milton Busker & the Grim Work have released a new single and video. "Internet Famous," from the band's LP Made of Stars (see review), is a jaunty indie rock jam about trying to become an influencer. The video, directed by Brandon St. Cyr, features local actor Rob Donaldson trying out a host of options to achieve fame on the web. Whether skateboarding, chugging juice or dropping a remote control in a blender, Donaldson's character attempts to get as many likes as possible while Busker sings hooks such as "All your bases are belong to me."

Correction, November 3, 2022: An earlier version of this story misidentified GIFT, one of the bands that will be touring with Robber Robber.