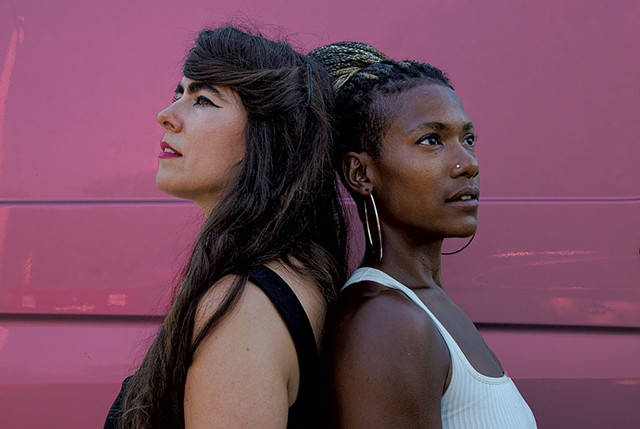 The pandemic has had a profound effect on the performing arts industry. But enterprising local minds, Vermont's warm summer and rolled-back capacity limits on public gatherings have ushered in the return of various forms of live entertainment. However, pre- or mid-pandemic, we've seen nothing like the upcoming event called RETRO SPEC.

From the minds of theater artist and educator Trish Denton and singer-songwriters/bandleaders Stephanie Wilson and Kat Wright comes this sprawling, highly conceptual, multidisciplinary happening. With social distancing in mind, people can view it live, on a huge screen, on Friday, August 21, and Saturday, August 22, at Water Works Park in Burlington. (Just to quell any confusion, Water Works Park is north of Waterfront Park, near the Moran Plant.) The piece will also be livestreamed.

What is RETRO SPEC, exactly? Well, it's complicated. The simplest way to think of it is as a theatrically infused, movement-centric music video, captured in one continuous take and broadcast live, and which attendees watch like they would a drive-in movie — just without cars. Through dance, music, visual art and filmmaking, the piece examines racial inequality in the U.S. and climate issues, and it abstractly envisions a new creative future.

"The first idea was to address the separateness [brought on by] the pandemic," Denton said in a Zoom chat with Seven Days.

She explained that the three artists started planning the event long before they knew what it would be and moved through various concepts before arriving at the somewhat nebulous final product.

Primarily, the piece is about change in nearly every conceivable way.

"We have entered a paradigm shift," Denton said. "We recognize that there are some things that we can never return to now. In order to make changes in that way, what narratives do we need to adapt? What anthems do we need to stir up? What type of support do we need to create the future that we want to see?"

In the piece, Wilson and Wright will perform songs from their collective catalogs, and will be accompanied by a small ensemble of dancers and other performers. Wilson will pull pieces from her work in pop-jazz group smalltalker and neo-soul outfit JUPTR. Wright plans to perform unreleased material that will appear on a forthcoming album.

"The whole show is a conversation. It's been this incredible growth experience for me to produce something that's so far outside my comfort zone," said Denton.

"Even without COVID-19 going on, this whole entire way of [working] is pretty cool," said Wilson.

"The act of doing the piece itself, and all of the behind-the-scenes work, and negotiating the pandemic, and conversations around history and where we all come from — everything behind the scenes is all part of the experience for us," Wright said.

Wilson and Wright both noted that having their work captured up close and personal, as opposed to the (admittedly fun) chaos of the bar and club scene, is one of the most crucial aspects of the piece.

"Getting to spotlight songs that feel really personal, having the visual and movement there ... These visuals really hone in what I'm trying to communicate," said Wilson.

Myles David Jewell, who acts as the project's cinematographer, guides the audience through the piece and adds some stop-motion animations, to be projected at various times throughout. He said the process has been a juicy creative challenge solved only through extensive collaborative work with the team.

"This is a new form for me," Jewell said, noting that it was not easy to approach the project from a traditional filmmaking point of view, with multiple takes, angles, cameras, etc. "I struggled to figure out how to even talk about it or describe it. It's been liberating. [We're] creating what I would never get the chance to create."

So if the audience is watching all of this unfold on-screen, where is the performance actually taking place? That's sort of a secret, as are the specifics of what will happen in the performance. But the event's creators note that they won't be far from the audience. The separation signifies the fact that not being able to see something doesn't mean it's not happening. Chew on that. 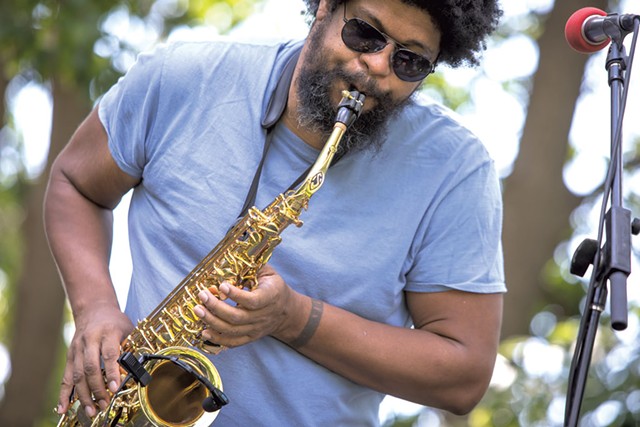 In case you missed it last week, the Flynn Center — along with the Burlington Discover Jazz Festival and the UVM Lane Series — announced its first live events since canceling its entire 2020 season. Called Hurly Burly (which I just realized is a play on "Burly," a Queen City nickname), the series consists of free pop-up events around Burlington that primarily highlight voices of color.

The first events took place on Saturday and Sunday, August 15 and 16, with trumpeter Ray Vega and multi-instrumentalist Matthew Evan Taylor at Roosevelt Park and Pomeroy Park, respectively, in the Old North End. The artists performed on improvised stages on the backs of trucks, a feature both whimsical and practical. About 100 people showed up each day, toting their own chairs and blankets. Though hardly approaching the size and scope of the jazz festival, the concerts did conjure a bit of the festival's magic — the kind of freewheeling energy that the free, outdoor shows downtown typically exude.

Taylor had never before performed solo under the Flynn's banner.

"That went really well," he said by phone after his show. "The audience was really compliant. It felt safe."

The Middlebury College assistant professor of music performed improvised, looped pieces of abstract jazz on saxophone, flute and hulusi. They were inspired by and connected to a collection of similar music he released in June called Say Their Names. Taylor created the seven-track album as a reaction to the recent police killings of George Floyd and Breonna Taylor (no relation).

Watching Taylor work his looped magic on Instagram, which he posts daily, pales in comparison to witnessing him create his textured, sometimes anguished sounds in person. Flynn artistic director Steve MacQueen said it best at the top of Taylor's set: "We're so excited to have three-dimensional people playing live music for three-dimensional people."

This was also Taylor's first solo live performance since the pandemic set in, which he said wasn't without its challenges.

"What I realized was that I have to worry about everything I do onstage," he said. "I'm playing wind instruments, putting them down on surfaces, putting them back in my mouth. That's a risk. How do I protect myself from myself?"

Luckily, thanks to the efforts of the Flynn, no one was allowed to sit in the "splash zone," as it were, the area directly in front of the stage that might be vulnerable to particulates. In fact, in the initial Hurly Burly press release, the Flynn noted that safety and social distancing were of the highest priority for the series. To keep crowds relatively small, the locations of the shows would be announced on the day they were scheduled.

Staging the concerts in the Old North End underscored Hurly Burly's focus on diversity, both onstage and in the audience. The neighborhood is one of the most racially and ethnically varied areas of the state.

The series continues this weekend with African fusion outfit Sabouyouma — subbing for jazz singer Ro Freeman — on Saturday, August 22. On Sunday, August 23, the Vermont Symphony Orchestra teams up with an ensemble from Lyric Theatre. Again, times and locations are announced the day of, so follow the Flynn's socials for the deets.

Correction, August 19, 2020: An earlier version of this column included an error about the nature of RETRO SPEC and misattributed a quote. The cast performs without live musicians.