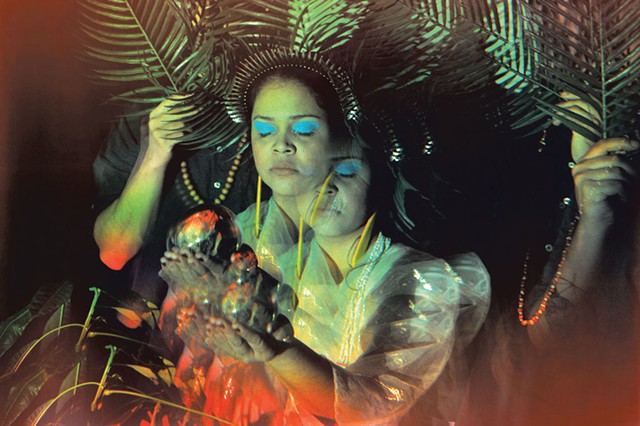 By the time this column hits the streets, the euphoria of Waking Windows will have likely waned — though the customary profusion of social media posts regarding the three-day music festival should keep the good feels going all week.

Last Friday through Sunday, downtown Winooski was a music nut's heaven on Earth. Hopefully you got the chance to see something totally mind-blowing. I sure did: Combo Chimbita. A modest crowd braved the mist on Friday night to catch the New York City group's psychedelic-Latin-groove-rock — or "tropical futurism," as they call it. Please come back soon, Combo Chimbita!

One piece of housekeeping that emerged over the weekend: The Burlington garage-punk collective formerly known as the Fobs have changed their name to the Bubs. On Sunday, the group posted an explanation to Facebook and Instagram: "We're officially changing our name from the Fobs to the Bubs. While a Fob is a silly name for something on the end of a watch or key chain, it came to our attention that the acronym F.O.B. is used derogatorily in some parts of the world and, while we don't want to give air to prejudice, we want there to be no confusion regarding what we're about."

The post went on to assure fans that the group opposes just about every "ism" you could name. While hardly a ubiquitous slur, the letters FOB can stand in place of the words "fresh off the boat," a derogatory phrase sometimes hurled at immigrants and refugees. Being the friendly, community-focused folks they are, the band members changed their name without any public fuss.

Kudos for not digging in your heels, Bubs. You're certainly not the first local band or organization to come under fire for picking a name some find offensive. But you smartly chose to listen instead of jamming your fingers in your ears and insisting that your name wasn't objectionable when someone clearly told you it could be.

Some other personal highlights of the glorious weekend that was included Montréal soft-pop singer-songwriter MUNYA's Friday evening performance at the Monkey House. The level of support and enthusiasm from the audience left her visibly enchanted. And on Saturday, Brooklyn dream-rock outfit Parrot Dream were another standout. Their wall-of-sound psychedelia blew me away. The mob at Scout & Co. seemed equally entranced.

But the most enlightening part of my weekend wasn't a musical performance at all. It was Saturday's #BOOKMOREWOMEN talk at 45 Main. Formerly local comedian and Chicago-based public radio journalist Annie Russell interviewed Abbey Carbonneau, the Massachusetts-based creator of website and social media movement Book More Womxn. The discussion marked Carbonneau's first public appearance associated with the cause. Her project scrutinizes North American music festival lineups by digitally removing from their posters all bands and artists composed solely of men. Any guesses as to what they look like after Carbonneau works her Photoshop magic? I'll spoil it for you: Typically, they're sparse AF.

An avid music fan and festival enthusiast with no music industry connections, Carbonneau started the project in 2018 as a reaction to the lack of female and nonbinary representation on festival stages, particularly in the headlining slots. Over the last year, her efforts have garnered attention not only from the festivals she's put on display but from artists such as Halsey, Kacey Musgraves and Brandi Carlile. 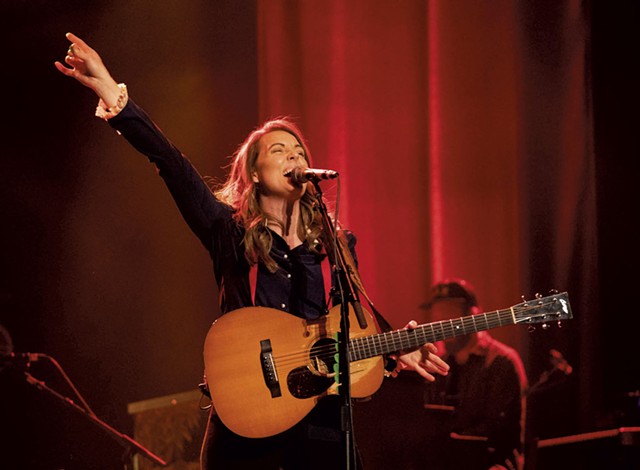 Carbonneau uses a fairly simple metric to track representation. If a band has at least one female or nonbinary member, it counts. Scrolling through the Book More Womxn Instagram, it's shocking to see how few projects meet this reasonable criterion. Of course, her method isn't a perfect science. She uses available information — press photos, band profile info, etc. — to determine whether or not a group counts. And sometimes people email her to point out that such-and-such band actually has a female bassist when they play live. But it's hard to imagine that splitting hairs results in much change in the final count.

So, why don't more music festivals offer more gender parity in their lineups?

"The main things that I hear [from festival organizers] are, 'There's just not as many women out there,' which is obviously not true. Or, 'They're all busy,'" Carbonneau said with a chuckle.

To disprove this claim, you only need to glance at Waking Windows' lineup to see how possible it is to book more women. Carbonneau pointed out that 71 percent of this year's top headliners fit the criteria. And of the top 75 artists billed, 49 (or 65 percent) include at least one female or nonbinary player. In fact, just as the talk was wrapping up, some half dozen Waking Windows stages featured inclusive acts.

"Waking Windows is one that [when I] look at the lineup, I don't have to do any math," said Carbonneau, referring to calculating a festival's percentage of non-male representation.

Speaking of percentages, she said that most 2019 major American music festivals average about 32.5 percent. But the number drops significantly when looking at smaller festivals, particularly if they cater to a niche genre. She says hard rock and bluegrass festivals are among the biggest offenders, some of which come in at zero to 5 percent.

But things are changing. In 2018, Florida's Tortuga Music Festival, a beachside country music hootenanny, had a paltry 7 percent female showing. In 2019, that number shot up to 43 percent.

"That, to me, was a conscious shift," Carbonneau stated.

Toward the end of the talk, Russell made an excellent argument that summed up not only Carbonneau's main points but paralleled the unspoken awesomeness of Waking Windows itself.

"It's not only because it's the right thing to do, to book more diverse lineups — it'll make your lineup better," she said. "Having a lineup that reflects the community that it's in [will] reach more people, [and] the audience is gonna be happier."

I can't wait for next year, can you?

Greenskeepers, "Keep It Down"