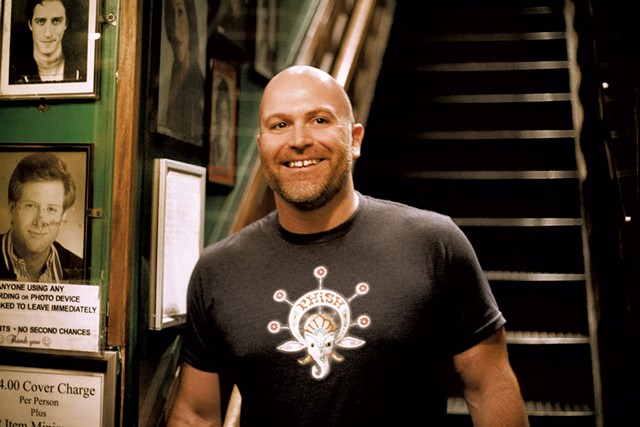 Mike Finoia loves Burlington. And not in that insufferably precious way that out-of-towners tend to adore the Queen City. (I mean, yeah, we are totally cute and quaint. But still.) The New York City-based comedian has a crush on the city, and Vermont in general, that dates back to childhood. This weekend he will requite that love by recording an album at the Vermont Comedy Club in Burlington.

This Friday and Saturday, November 11 and 12, Finoia will do a four-show run at the VCC, which he will turn into his debut comedy album, Mike Finoia: Live in Burlington. And, aside from the fact that he's not a Vermonter (at least not yet), it is an entirely locavore production.

For starters, he's recording it at VCC, which is the first time the venue has been used for such a purpose — and, we think, the first time a large-scale comedy album has been recorded in BTV, if not Vermont, period. The audiophiles from Tank Recording Studio in Burlington will handle production and engineering. Local artist Bruno Tracy whipped up the Vermonty-AF cover art. It features an anthropomorphic maple syrup jug sporting a Rollie Fingers hipster 'stache — which was reproduced for the show posters. The shows are sponsored by St. Albans brewery 14th Star Brewing, which allows the proceeds to go to Phish's WaterWheel Foundation, who will disburse the money to local charities. Local veterans can get free admission to either of the Friday shows — that's Veterans Day, BTW. Also, the opening acts for all four shows are locals. Marlon Fisher, aka Big Fish, hosts Friday. Mike Thomas hosts Saturday. Annie Russell is the featured comedian both nights.

So why would a hot, up-and-coming NYC comic choose to record his debut comedy album in this lakeside hamlet?

Finoia, who is a regular on truTV's "Impractical Jokers," says he started coming to Vermont on vacation as a kid — often to Lake Willoughby and the Northeast Kingdom. When he discovered Burlington, he says it was love at first sight.

"I fell madly in love with the city," he says. "There was just something about it."

Finoia is now in his thirties. If we do a little backwards math, we discover that his connection to BTV roughly coincides with the rise of a certain iconic jam band.

"I'm a huge Phish fan," he says, adding that he's seen the Phab Four more than 200 times. "So there was definitely that nerdy, 'Let's go to the mecca, see where they're from. Try to find the rhombus.'"

That a Phish-head would make a pilgrimage to Burlington is hardly novel. He even looked into attending the University of Vermont for college, but, because of its hefty price tag for out-of-state students, he ended up going to school in Connecticut. But Finoia's fling with the city was not a one-night stand. He says he traveled to Vermont as often as he could during college for spring break, long weekends, just because, etc.

Finoia has performed in Burlington previously, including at the 2012 Green Mountain Comedy Festival and headlining the VCC last year. At the GMCF, he befriended VCC owners Nathan Hartswick and Natalie Miller. When he decided to record an album, Finoia reached out to the First Couple of Vermont Comedy.

"I wanted to do this citywide collective where we can combine local talent, local artists, a local recording studio, local beer and local openers and make it something the whole city can enjoy and get behind," he explains. "Because one day, like it or not, I'm gonna live there."

"Everybody has their own definition of success," says Finoia. "Mine is just to have a place on the lake in South Burlington and live amongst the great people of Burlington."

So what might Vermont comedy fans expect from their neighbor-to-be? For a clue, maybe give one of your old Phish bootlegs a spin.

"I'm a huge music fan," says Finoia, who hosts a music podcast called JamCast, in which he interviews musicians about their favorite music. "The music I like is different every night," he continues. "It's imperfect. So I'm excited to take that aesthetic that I learned from Phish, and the Grateful Dead and jazz, and just capture one night in my life as a comic."

So, Mike Finoia: the jam band of comedians?

Finoia says he is not a "What's the deal with airline peanuts?" type of comedian. His style is conversational and sometimes confrontational, though he is his own favorite target. "Most of it is me calling myself out on my own bullshit," he says. And, like a good jam show, his sets tend to unfold unpredictably.

"I know what I'm going to open with and what I'll close with," he explains. "But it's the ride in the middle that's the fun part." Finoia adds that Burlington provides a perfect setting for his comedy. "I like an intelligent crowd," he says. "And, believe it or not, Burlington has taught me a lot about comedy.

"When you're first starting out, you don't think as much about what you're really saying. You just want laughs," he says. "There are certain crowds that expect a certain level of intelligence and force you to raise your game. Burlington has that kind of crowd."

It also has that kind of comedy club. Finoia is quick to heap praise on the scene that orbits the VCC.

"There are just so many hilarious people in Burlington," he says. He adds that word about Vermont comedy is getting around.

"It's sad how many cities you go to where club owners don't respect and nurture the local talent," he says. "But Nathan and Natalie understand how important that is. And the comedy community [in NYC], you'll talk to people at the Comedy Cellar and you'll hear all these atrocious stories from the road. But then sometimes you'll hear, 'Dude, I just did the Vermont Comedy Club. What a club.' And I smile to myself and think, Way to go, Nathan and Natalie."

In other news, if you see only one show this week ... you should probably get out more, loser. Sorry, that was mean. But seriously, especially for early November, it's a nifty weekend on the local scene.

But if I had to choose just one show, it would be a toss-up between Hiss Golden Messenger on Friday, November 11, and Margo Price on Saturday, November 12, both at the Higher Ground Showcase Lounge. Let's make a case for each.

Price is the latest bright face in the ongoing outlaw-country revival for which the likes of Sturgill Simpson, Chris Stapleton, Jason Isbell and Lydia Loveless have lately become poster children. She very much belongs in that conversation. Price's 2016 record, Midwest Farmer's Daughter, is a stunner that, much like Simpson's Metamodern Sounds in Country Music or Loveless' Somewhere Else, treats classic country tropes not as museum pieces but as malleable threads of a larger musical continuum. It's one of my favorite records of the year.

Ditto Hiss Golden Messenger's two 2016 albums, Heart Like a Levee and a companion bonus record, Vestapol — the latter a low-key collection of unreleased tracks. Levee holds some of the most affecting songwriting I've heard this year. On it, front man MC Taylor digs deep into what it means to be both a dreamer and family man, and how to reconcile those seemingly at-odds parts of his being. It's beautiful and raw and honest. The record also boasts some of the most rhythmically interesting arrangements you're apt to hear on a folk-rock record.

Not that this should tip your decision either way, but I interviewed Taylor last week and found him to be candid and insightful. Look for that on our arts blog, Live Culture, this week.

Last but not least, congrats to my music-scribbling colleague Jordan Adams. Last week I told you he was attempting a feat of unprecedented musical and social endurance: the Radio Bean Marathon, in which he attended the entire annual Radio Bean birthday bash from start to finish. I'm proud to say that he did it and lived to tell the tale. And it's a helluva tale. Read all about it this week on Live Culture.