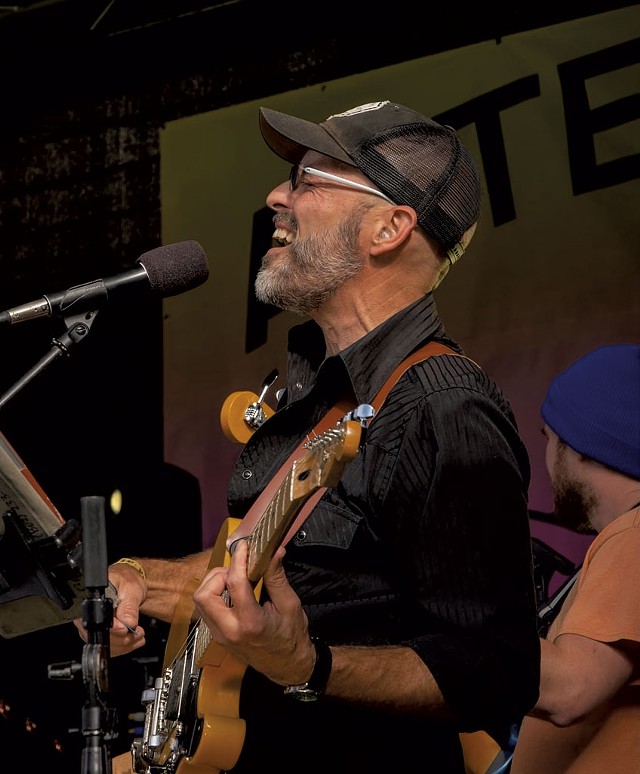 People always ask if you remember what you were doing when the important stuff happened. My folks and their friends used to talk about where they were when JFK was assassinated. Gen Xers compare notes on memories of watching the Challenger space shuttle explode on TV. And many of us have our 9/11 recollections, of course.

Maybe it's my questionable memory — I swear I have multiple Mandela effect moments each week — but I tend to remember what I was listening to during the big events more than anything. Music has a strange way of worming its way inside the brain, finding specific memories and wrapping around them like a coil. The results can be ... interesting.

For example, if I hear "Reptilia" by the Strokes, all I can think about is how much I loved the Sadie Katz Delicatessen, the Burlington deli that used to sling the best pastrami in the state. I heard the tune during my last meal at the Bank Street spot before it closed for good in 2011. Bam. Embedded in the brain.

St. Albans-based singer-songwriter Eric Bushey skipped the middleman and has written "Don't Tread on Me" about a day that already lives in infamy: the January 6 insurrection at the U.S. Capitol. Together with fellow Vermont songwriter Troy Millette, Bushey recalls with vivid clarity the violent mob climbing the walls of the Capitol Building and screaming slogans such as "Stop the steal" as it attempted to prevent the certification of election results securing the victory of Joe Biden as president.

Over the rhythm of a prison chain gang, Millette's raspy voice sings, "They said 'Don't Tread on Me' as they tread on us all." Bushey's fretless banjo provides an ominous backdrop to the tune, which features some of his bandmates from the Blue Rock Boys and Fiddlehead Hollow backing him up. Producer and 8084 guitarist André Maquera lays down a screaming guitar solo, the perfect touch of frenzy in a song brimming with equal parts anger and sorrow.

In an email, Bushey told me that he wrote the song while on a long, frigid walk only a few days after the insurrection.

"I saw the speech that led up to the charge," he recalled. "I saw the gallows that had been erected. I saw a flag that once beckoned fledging young colonists to band together in unity and defend their basic human rights smashing windows and being used as a weapon that day."

To say the song is topical is an understatement. The day before this issue hits the streets, the midterm elections could very well decide whether we see something like January 6 again. Many right-wing politicians and media personalities are still insisting the election was stolen from former president Donald Trump, despite all evidence to the contrary. None of the division and anger from those days has receded; if anything, tensions within the country are more heightened than ever.

Bushey believes it's part of a songwriter's creed to document these moments, as did his idols Pete Seeger or Woody Guthrie.

"I'm not trying to be provocative," he asserted, "but rather put it out there as an actual account of what happened that day. Sometimes it's a guy with a banjo or a guitar that can actually make a difference by simply writing and singing a song."

Check out "Don't Tread on Me," streaming now on Spotify and other platforms.

The death of a loved one can inspire all sorts of reactions. When Vermont author and songwriter Nancy L. Hassett-Dahm lost her husband, Alfons Dahm, in August 2021, her grief pushed her to try something she had never attempted: writing a piece of classical music.

Dahm, 74, spent time in her youth as a professional singer and songwriter, then became a hospice nurse. Even after writing her 2001 book, Mind, Body, and Soul: A Guide to Living With Cancer, Dahm never really lost the songwriting bug, composing country songs such as "I'm Not Done Yet" and "The Devil Came Down to Texas."

After Alfons died, Dahm was overwhelmed with grief. Yet she was determined to compose a piece of music to honor a man whom she described by email as someone "who worked hard all his life, was a father, and a good husband."

"My Departed Love" is Dahm's classical music debut, a gorgeous, elegiac piece of music that eulogizes the love of her life. Though she never learned to read music, Dahm spent months painstakingly learning to play the song that she had written in a matter of hours. She initially recorded the song at André Maquera's West Street Digital studios in St. Albans earlier this year; Vermont musician Will Patton wrote the score for piano.

Since then, she's taken it up a notch, enlisting the Capellen Orchestra to perform and record "My Departed Love." The orchestra, composed of musicians from the Czech Republic, Slovakia, Austria and Hungary and led by conductor Petr Pololáník, has scored films and TV shows such as "The Tudors." Its rendition of Dahm's composition is something to behold, a mesmerizing take on a song she calls "a powerful statement of loss and eternal love." A video of the Capellen Orchestra's performance of the piece is up now at mydepartedlove.com.

It's not every day you retain a renowned orchestra to perform your first-ever classical piece, but Dahm feels that she is just getting started.

"What I hope people will take from this is that you can do anything your heart desires, at any age," she wrote. "Age isn't a limiting factor, and where there is a will, there is a way."

Matt Hagen (the High Breaks) and former Grace Potter and the Nocturnals drummer Matteo Burr's project San Mateo has released a remix of "Can't Get Enough." The track, featuring Craig Mitchell (Purple), is part of a larger series of remixes from artists such as Burlington rockers Vetica that will comprise a full-length album later in the year.

In anticipation of the release, Hagen and Mitchell are throwing a listening party on Wednesday, November 23, at the Venetian Soda Lounge in Burlington's South End.

Burlington singer-songwriter and all-around keyboard badass Tyler Mast has released a new single: the rock-leaning "Is It Too Late for Me." Mast can move among pop, jazz and folk effortlessly, so it's not too surprising to see him push into harder territories. The tune, featuring big slide guitar solos and a hard-hitting drum track, showcases Mast's powerful, soulful vocal work. In an email to Seven Days, Mast described the tune as "the story of ordinary people whose dreams have been pushed aside as the demands of everyday life consume their time and energy."

"Is It Too Late for Me" is currently streaming on Spotify.

Shelburne Vineyard's Concerts in the Loft series returns this month. As the temperatures drop, the vineyard's concerts move indoors to the loft above the tasting room. Singer-songwriter and former Salad Days front person Aaron Flinn kicked things off on November 3 with a solo set. Starting on November 30, guitarist and Grateful Dead tribute artist Zach Nugent holds down a weekly Wednesday slot. On various other evenings in December, performers include Danny LeFrancois of Americana act Danny & the Parts, folk duo the Beerworth Sisters, and Samara Lark and Joe Adler's Hair Down Holiday Show.