Soundbites: Music Festivals During a Pandemic

The Year of No Festivals ... Kind Of

This year has been called "the year of no concerts," "the year of no festivals," "the year of no, well, everything." And while that's largely true, some small outdoor concerts and DIY events have taken shape in various forms. I checked in with the folks behind two small, fringy fests to find out how and why they decided to proceed.

A few weeks ago, I received an invitation to a hush-hush, invite-only music fest called Alderbrook Campout. The event was tucked in the woods just off Route 100 in Waterbury Center, where a modest gathering of mostly twentysomethings had the pleasure of experiencing something close to a normal festival.

In an open-air pavilion at the Waterbury-Stowe Fish & Game Club, local bands and DJs took the stage throughout the day, including Clay Aching, Lily Seabird, the Dead Shakers, Roost, Greaseface, Father Figuer, and DJs Taka and Disco Phantom. As the scorching afternoon sun slowly made its way toward the towering tree line at the edge of the property, attendees basked in the rays on chairs and blankets brought from home, tossed Frisbees, kicked back cold ones and other intoxicants, and watched with visible glee as artists played their hearts out.

All eyes (and ears) were on the majestic, eclectic sounds and goings-on, with little chitchat. Between sets, people danced like no one was watching as funky jams filled the air.

To add even more magic to the picturesque setting, hundreds of dragonflies buzzed through the air, glinting in the sun like sparkling little pixies. It was almost too much.

In 2019, the then-brand-new overnight festival at a fish and game club in Waterbury had scarcely more attendees than the current 150 cap — that's the pandemic limit on outdoor gatherings in Vermont at the moment. Founder Ralph Bissell felt confident he and his team could safely and effectively go ahead with this year's installment.

"It looks like we're all systems go," Bissell said by phone a few days before the event. "[But] we've been ready to pull the plug at any time." 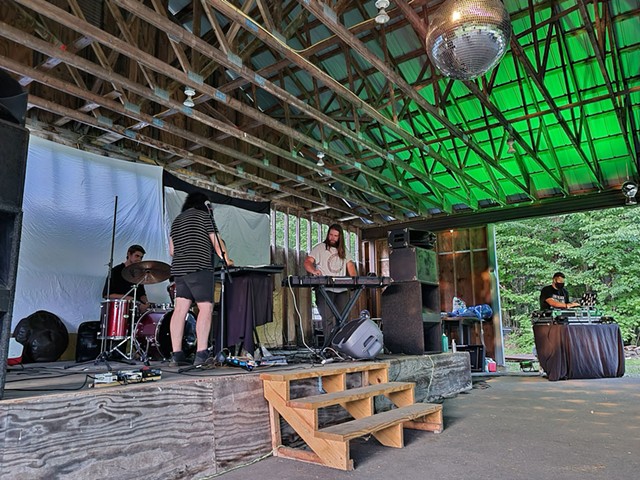 Bissell explained that the formerly public gathering shifted to an invite-only model for 2020, with proceeds going entirely to two nonprofits: the Sylvia Rivera Law Project and Gays and Lesbians Living in a Transgender Society (G.L.I.T.S.). Contributions were to be made ahead of the festival to gain admission.

Each band and artist was given a finite number of invite slots. This not only kept numbers low (about 100 people, including performers, attended throughout the day), it also created a more interconnected network of attendees should the need for contact tracing arise.

Bissell also mentioned that all attendees were asked to cooperate with current guidelines regarding out-of-state visitors. If you were coming from out of state, you were expected to follow the quarantine procedures laid out by the Vermont Department of Health.

"We had to tell some people they couldn't attend because they were traveling from places that had more than 400 cases per million," Bissell said. "It's a little awkward to have to ask people where they're traveling from, but they were very understanding."

Precautions were taken regarding setup and equipment. The stage was set up in an open-air pavilion. Other than a backline bass amp and kick and snare drums, all instruments and other gear belonged to each band or artist. Everyone strictly handled their own gear.

Despite those rigorous restrictions, the vibe at the event was low-key, though not in a way that signaled discontent or disinterest from the audience. Attendees seemed to understand it was a privilege to be there, and they kept well within commonsense guidelines for maintaining social distance.

Because the festival was essentially a private party, it didn't have some of the accoutrements festivalgoers might expect, such as food and beverage offerings, art displays, and a bold security presence. But I don't think anyone was expecting any of those things. To be able to rock out to live music seemed to be all anyone really needed.

Night Doll Fest was another fringe event heading into its sophomore year in 2020. Last year, the punk-leaning party, organized by riot rebels Miku Daza, took place in and around Junktiques Collective in Burlington's Old North End. But mononymous front person Miku knew by mid-spring that she and her team would need to rethink things.

Night Doll Fest pivoted to a digital format, but not in the way most fests have. Eschewing livestreaming, it transformed the very concept of what a festival can be by creating high-quality, prerecorded music videos of bands and artists on the "lineup" and releasing them on social media one by one. The clips began coming out in August and will continue into September.

Viewers were and are encouraged to make contributions to a trio of charities: Rebel Womxn, the Pride Center of Vermont, and the Transgender Gender-Variant & Intersex Justice Project.

"We figured: We have the resources; we have a studio we can social distance at," explained Miku by phone. "And we're going to be able to give these artists high-quality content that they can use however they want."

Perhaps it's a stretch to call this model of content production a festival, but it's actually a pretty creative solution to a problem I've seen referred to as livestream fatigue. Once the pandemic hit and shows and tours were axed across the country, everyone shifted to a livestream model. That was fun for a few weeks, but many issues, such as poor sound and picture quality, plague the format. Top-tier tech and a strong internet connection are essential.

"The problem, in my mind, of just going live is that the artist is at the [mercy] of whatever technology they have," Miku said. "I went live, solo, right when the pandemic happened, and it was really difficult. I didn't even have a computer at the time. I had to use a broken iPad and my iPhone."

Going with a prerecorded format also allowed artists to have a bit more control over the final product, should they so choose, not to mention flexibility for viewers, who can watch vids whenever they have the time.

"We wanted to be super flexible," Miku said. "Our attitude was giving [our artists] the most freedom to do what works for them."

For instance, Princess Nostalgia (aka Lili Traviato) opted to edit her own video.

"If it's gonna be a video of me performing my songs, I just want to be in control of all of it," Traviato said, noting that she also opted to overdub her original tracks instead of use the live sound recorded on set.

Traviato, who was also scheduled to appear at Alderbrook but had to pull out at the last minute, said she approached her set with an open mind, though she had some trepidation.

"I was kind of struggling, because [I knew] this was going to be consumed differently than a live format," she said. "I'm more OK with imperfection in my live vocals if I'm sharing the space with people and they're feeling my spirit. But if this is going to be permanently on the internet, I just want them to hear my production skills exactly how I like them."

Miku said that, going forward, future Night Doll Fests could incorporate some of this year's model, but it's too early to know for sure.

"Things are so up in the air right now," she said. "People are looking for a little bit of inspiration, hope, entertainment, escape. I'm really happy that art and music are still happening, no matter what the circumstance."

The Asteroids Galaxy Tour, "Around the Bend"