The conversation on the local scene for the last few weeks has largely centered on the closing of beloved Burlington punk club 242 Main. And frankly, it's been some depressing shit — compounded by all of the other depressing shit going on in the world. Man, I'm depressed as shit ... sigh.

Where was I? Oh, right. Picking up your shitty spirits.

Perhaps most especially during dark times, it's important to remember that good things do still exist. Like, for example, awesome little music bars off the beaten path that bring in some of the coolest bands on the planet — typically just before everyone else realizes how cool they are. So let's focus our energies on some of that this week, shall we? After all, the depressing shit will still be there when we're done. And you'll likely need some positive vibes to deal with it. So...

This Saturday, December 17, the Monkey House in Winooski celebrates its 10th anniversary. For the occasion, the bar is throwing a daylong bash featuring some ace local acts. Cuz that's how they do.

Right now some of you, particularly if you've been around town for a while, might be saying, "Hey, that's great, Dan. But either you're an idiot or the folks at the Monkey House are. Because that place has been open way longer than 10 years. (BTW, my money is on you, idiot.)"

Right you are! (And ouch.) The Monkey has indeed been open for more than 10 years. But it was 10 years ago this month that the bar changed hands and, under owner Ryan Smith, began to evolve into one of the area's most exciting and important live-music venues.

That's partly due to the savvy of the club's talent buyers — former Monkey talent buyer Paddy Reagan in particular. Credit also belongs with independent, ultra-hip booking outfits that have funneled through the Winooski traffic circle great smaller acts that might not otherwise have stopped in the area. Among others, these include Tick Tick, Angioplasty Media and MSR Presents — a trifecta that essentially begat the excellent Waking Windows Presents. And just which breaking acts has the Monkey hosted, you wonder?

Raise your hand if you've seen one or more of those acts locally in recent years. Keep your hands raised if you caught them somewhere other than the Monkey. Nearly all of those bands have made return visits to larger venues.

Point is: The Monkey House is like that one friend — let's call him or her M. House — who is always telling you about some cool unknown band. Then you forget about that band for six months until you read about them on Pitchfork or hear them in a commercial and you tell M. House, "Yo, have you heard Ex Hex?" And M. House rolls his or her eyes and secretly thinks you're a tool.

Of course, the Monkey has been a hot spot for local music, too. Often that's meant locals snagging opening slots for the aforementioned touring acts. Just as often it's meant killer locavore showcases, like, for example, this Saturday.

The next throwback, and a band that caused me to do a legit double take when I saw them listed, are In Memory of Pluto. Eight or so years ago, the relatively short-lived IMOP were on the short list of the most dynamic live bands in town. They combined emo sensibilities and pop-punk melodic punch with a fury and bombast that few bands, local or otherwise, could match. I friggin' loved In Memory of Pluto. Some awesome local band reunions have been occurring of late, and this is one of 'em.

In closing, thanks to the good folks employed by and involved with the Monkey House. I don't think it's a stretch to say that the dynamic scene we enjoy today exists in no small part because of the venue's willingness to take risks and to work with some visionary folks long before others would. You helped set a template that other venues, new and old, have adopted. And we're all luckier fans for it. Happy anniversary.

Americans with a functioning conscience breathed a sigh of relief last week when the Army Corps of Engineers refused to grant an easement to Energy Transfer Partners, effectively stopping the Dakota Access Pipeline in North Dakota and marking a victory for the water protectors at Standing Rock ... for now.

Though the ACOE ruling is a positive development, the fight is far from over. Especially under a Donald Trump regime, there's no guarantee the ruling won't be reversed. (See? I told ya the shitty news wasn't going anywhere.)

Additionally, the event features a water ceremony, a pipe invocation and a talk about local First Nations.

Speaking of protesting, meet NODON. That's a new duo from Villanelles' Tristan Baribeau and Seth Gundersen, who specialize in "fast and furious anti-bigotry, pro-equality power punk." And, yes, the name is a direct reference to a certain bloated, dim-witted Oompa Loompa about to take up at least part-time residence in the White House. 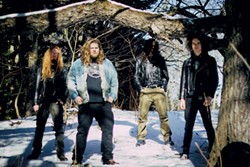 NODON premiere on Sunday, December 18, at Radio Bean with "transcendental crust-folk" freaks Pissant and "acousticore jazz-stained death pop" outfit Zodiac Sutra. In the meantime, check out the band's recently released EP, President Fuckboi, at nodon.bandcamp.com. And look for a more in-depth piece on the duo from Jordan Adams on our arts blog, Live Culture, later this week.

Last but not least, if you're in need of a holiday pick-me-up — or beat down — grab a Yule log and check out the fifth annual Metal Monday Xmas Bash on Monday, December 19, at Nectar's in Burlington. The show features locals Barishi and Savage Hen, as well as that most devilish of holiday traditions, the upside-down Christmas tree.