Did y'all get a chance to read about Northeast Kingdom DIY venue the Barrage? You can find all the details here. Everything you absolutely need to know is included — but there's always more to a story than what can fit on the page. That's the beauty of having this column: I can always sneak in those extra tidbits if they don't flow with a feature's narrative. So, I want to shed a little light on an interesting thing I learned while rocking out in Holland, Vt.

Before opening his set last Friday night, NEK-based singer-songwriter Kyle Woolard — of the Charlottesville, Va., band the Anatomy of Frank — clued me in to a pretty cool long-term project he and his cronies are working on. Though now living in different states, Woolard and company are in the process of recording a series of seven albums — one for each continent. And by "for each continent," I mean the group is actually recording the albums on each continent. So far, they've knocked off North and South America, the latter being the indie-folk group's most recent release, which was recorded in Ecuador.

Asia, Africa, Europe and Australia seem within the realm of realistic possibilities — but what about mother-flippin' Antarctica? South Pole tourism certainly is a thing, but you can't just, like, show up on your own. I would think setting up a recording studio in such a controlled and hostile environment would be difficult, to say the least.

But Woolard, a former student of astrophysics, has some scientifically inclined friends currently toiling away at the McMurdo Station who will help him get situated, he says. So the Antarctic edition of the band's continental series might actually be easier than others. 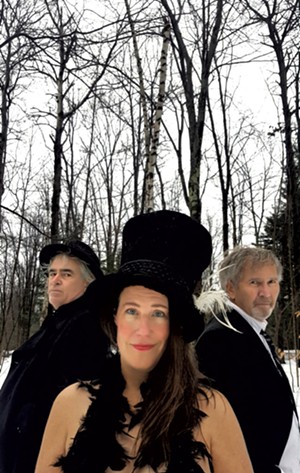 Richford-based singer-songwriter David Rosane kicks off a super neat benefit tour this week with his band, the Zookeepers. The group, which also includes guitarist/bassist Don Sinclair and keyboardist/percussionist Jennifer Grossi, brings its gothic-tinged folk-rock to a string of Vermont libraries and other locations throughout July and August. The tour kicks off on Saturday, June 30, at the Montgomery Center for the Arts.

"We want to shine a light on our libraries as major contributors to freedom of speech and the functioning of democracy," Rosane recently told the Rutland Herald. "Economically challenged areas can have lower voter turnouts. Promoting libraries and literacy can help people enjoy a better grasp of the issues and encourage them to participate in the democratic process."

From Fairfax to Bradford, the tour includes 14 libraries total. Funds raised at each stop benefit the library itself and its literacy programs. The tour also promotes the group's brand-new LP, Book of Zoo. Be on the lookout for a Seven Days review in the coming weeks.

On Saturday, the folks at GLAM Vermont — an empowerment project under the Pride Center of Vermont's umbrella — host a Pink Pride Party at the Higher Ground Showcase Lounge in South Burlington. For many years, Vermont's official Pride Celebration has been in September, as it will be this year. But given that June is historically LGBT Pride Month — and since most major cities hold their festivities during one of the weekends in June — it makes sense that the group would want to help folks in the Green Mountains stave off FOMO by holding their own shindig.

The Pride Center's health and wellness coordinators, Taylor Small and Travis Miller, give us the lowdown.

"The reason why Pride was moved to September was because of the migration of the queers all around the country to go to all of the bigger, better celebrations happening in places like Boston, New York City [and] Montréal," says Small.

"We've heard from our community members time and time again, 'What's going on with Pride? We want Pride!'" Miller says. "We're just responding [to that] and giving them Pride."

A big component of GLAM Vermont — other than its primary objective of fostering community through leisurely activities — is its public health initiative. Educating and supporting gay, bisexual, transgender and gender nonconforming people who may be engaging in potentially risky sexual activity is one of the group's cornerstones.

"We're sex positive [and] empowering of people making the best decisions for themselves and their lives," says Miller.

As for the party itself, DJs VU and Craig Mitchell keep the energy ramped up with megahits all night long. But the component that ties everything together is the Blue Lounge: a cordoned-off area where members of the MSM community (men who have sex with men) can obtain information about PrEP — antiviral drugs that reduce the risk of contracting HIV by up to 90 percent.

As always, visit pridecentervt.org for additional support and resources.

The eight-day fest hits various towns across the state and concludes on Sunday, July 8, at the Trapp Family Lodge in Stowe.

Also launching this weekend is the annual Festival International de Jazz de Montréal. From Thursday, June 28, through Saturday, July 7, eclectic artists from all over the world flood the city's various performing arts centers, cafés, clubs and streets with jazz, rock, folk and pretty much any dang genre you can think of.

The overwhelmingly enormous lineup includes one of my favorite artists: the indelible Kimbra. If you recall, the soulful New Zealander teamed up with Rubblebucket's Alex Toth and others in mid-2016 for a tribute to David Bowie at the ECHO Leahy Center for Lake Champlain in Burlington. I've just discovered she's on the roster as I'm typing this, so now I feel extremely distracted and need to figure out if I already have plans on Friday, July 6, when Kimbra plays Club Soda.

Be sure to give yourself extra time to cross the Canadian border and to get into the city itself. The fest can really muck up traffic!

The Blue Nile, "Headlights on the Parade"