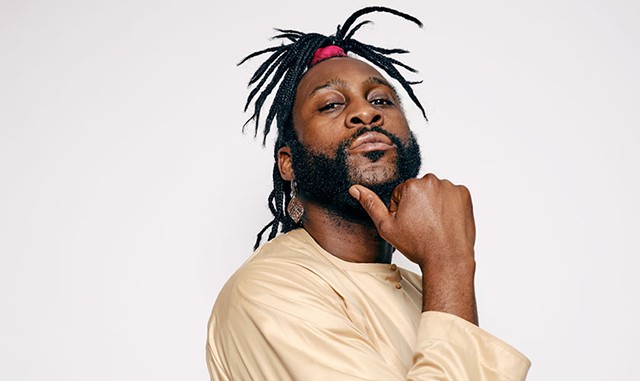 I don't drink coffee. There, I said it. Recoil in horror if you will. Wonder out loud how I can possibly form coherent sentences in the morning or make it through an eight-hour workday without those beans you all love so much. To me, you're all like the navigators in Dune, addicted to something that allows you to fold space and time briefly but mostly just makes you want more of the bloody bean.

To be clear, it's not like I don't need it. I actually don't form coherent sentences in the morning — just today, I picked up the dog's sweater, thinking it was my pants. I even put one leg into the sleeve hole before I realized the level of stupidity happening. The dog just stared at me, probably thinking, This asshole should really start drinking coffee.

So you can imagine how out of place I feel in a coffee shop. I walk in, whatever sad-sack singer-songwriter record that's playing skips to a stop, and everyone points at me as if they were Donald Sutherland in Invasion of the Body Snatchers. Or at least that's what I imagine.

The Burlington Discover Jazz Festival used to do something similar to me, except it was spread throughout the whole downtown. For 10 days, the hepcats would take over and there'd be alto sax coming from every corner. It was surreal to me — not in the trippy, Salvador Dalí way, but in the I-don't-belong-here fashion.

Which was dumb. Thinking jazz is the music of some exclusive club is dumb. Maybe hating coffee is dumb; I don't know.

My point is: Over the years, I came to welcome jazz fest into my life. Last year's return-from-quarantine edition was easily my favorite jazz fest ever. Whether it was being outside with people again or the necessary emphasis on local music, there was real magic in the air. The BDJF folks did an incredible job of adapting to adversity and trying something new.

That ingenuity made the Flynn's announcement last week that musician, artist and activist Michael Mwenso would guest curate this year's festival even more intriguing.

Mwenso played the festival in 2016 and 2017 with his jazz, blues and Afro-futurist band, Mwenso & the Shakes. Along with friend and colleague Jono Gasparro, Mwenso founded Electric Root, an organization/art collective dedicated both to preserving Black music and to spotlighting new movements in Black music.

Flynn artistic director Steve MacQueen handing Mwenso the reins to the entire festival had me excited enough to traipse through the snow and cold last week to meet up with Mwenso and Gasparro at the Flynn. In town to tour venues, they had just spent the afternoon at the Integrated Arts Academy in the Old North End, speaking to fifth graders about music and playing them cuts by Mahalia Jackson and Louis Armstrong.

"We're trying to decolonize musical curriculum," Mwenso told me as we sat across from one another. "So we played them these deep records. And this beautiful boy looked at me and said the music sounded old to him."

Mwenso laughed beneath his mask, his eyes shining as he recalled the encounter. "I told him, 'It's not old if you haven't heard it before,'" he said.

Sitting beside him, Gasparro gave an emphatic nod.

"We've toured and played so many colleges," he said. "And a lot of students across the country have no idea who James Brown is now. We can't let that be."

"We believe Wynton came into the world to keep jazz in it," Mwenso added. "We believe we need to save all Black music."

"Wynton" is Wynton Marsalis, legendary jazz trumpeter and managing and artistic director of Jazz at Lincoln Center. Marsalis has been equal parts mentor and family friend to Mwenso since the two met when Mwenso was a teen living in London.

Mwenso was born in the West African country Sierra Leone but moved to England when he was 10 years old. Tragically, his mother was deported to Nigeria a few years later, but Mwenso was taken in by her former landlord, a white man in his fifties, and raised in London.

"He had a massive record collection," Mwenso revealed. "In his youth, what took him out of loneliness was Black music. So there were all these Gladys Knight and Bobby Bland records around for me to experience."

It wasn't long before Mwenso was going to Ronnie Scott's, the famous London jazz club where some of the best musicians in the world played. There, at the age of 17, he saw Marsalis for the first time. The two would form a deep relationship, and Marsalis eventually brought Mwenso to New York City to work with him at Jazz at Lincoln Center.

Marsalis would also connect Mwenso and Gasparro. Born in Ohio, Gasparro did his college internship in NYC with Jazz at Lincoln Center and worked directly for Marsalis after graduation.

"Michael had been putting together shows at Ronnie Scott's by then and running this great late-night jam," Gasparro explained. "And Wynton wanted him to come over and bring that same energy to this club in New York called Dizzy's."

While Gasparro worked on elevating the programs at Jazz at Lincoln Center, including webcast seminars and educational forums, Mwenso was transforming Dizzy's. Much like he had done at Ronnie Scott's, Mwenso reached out to the younger generation of jazz artists, many of whom attended the Juilliard School. From those late-night sessions, Mwenso & the Shakes were born.

The Harlem-based roots band toured hard for years, with Gasparro serving as tour manager before eventually moving out to California with his wife and newborn.

"We brought the band to all these crazy places," Gasparro recalled. "The whitest dive bars, folk and blues festivals, college campuses ... We didn't give a shit."

Those experiences inspired Mwenso and Gasparro to use Electric Root to stage an event last year called Black Roots Summer at Bard College in New York. Over two weekends, Mwenso and more than 30 other predominantly BIPOC performers premiered three concerts, one of which was a new twist on The Sound of Music.

"We did it as The Sound of Black Music," Mwenso said. "We took the actual songs from the original show but funneled them through the Black lens."

Mwenso said the event at Bard showed him a way forward with Electric Root. After the death of George Floyd and the national reckoning that followed, Mwenso felt the time was right to push the conversation of Blackness in America, especially in relation to the legacy and future of Black musicians.

So when MacQueen called him up one day and asked him to curate the 2022 BDJF, Mwenso was ready.

"Our vibration with this is not going to just be coming from jazz," Mwenso said. "It'll be about the holistic nature of Black music. We're going to be asking, 'How do we present gospel here? Who's a good, young voice in blues music? Who's a deep jazz player, a figurehead, and who's the young cat ready to step up?'"

Gasparro gave his old friend a knowing smile as we prepared to leave the Flynn and head back out into the cold.

"We don't care about genre. They're used to sell records," he said. "It's like Michael was saying: We want to honor the ancestors by preserving their art and culture. But we also want to make them live."

In this week's edition of Oh, It's Real, we visit one of my favorite artists — at a particularly low point in his career. Who doesn't love Tony Bennett? The world-famous crooner has graced the world with his silky voice and cool-as-hell demeanor for decades, crafting a career any musician would envy.

But we all have our fuckups. In 1970, Bennett's career was floundering, so Columbia Records' head honcho, Clive Davis, pressured Bennett to record Tony Sings the Great Hits of Today! Though critically derided, the record isn't the kind of terrible that would warrant inclusion here — save for his head-scratching, possibly purposely terrible cover of the Beatles' "Eleanor Rigby."

For reasons only Bennett could say, the singer decided to tackle the song in true William Shatner fashion — as in, spoken word. Hearing Bennett speak the lines "Eleanor Rigby ... waits at the window ... wearing the face that she keeps in a jar by the door ... Who is it for?" like someone just gave Christopher Walken a hit of weed and asked him to recite his favorite Beatles tune is, well, it's awful.

The song and album sucked enough to force a divorce between Bennett and Columbia. His career wouldn't recover until the '80s. Let that be a lesson: Never half-ass a Beatles cover.