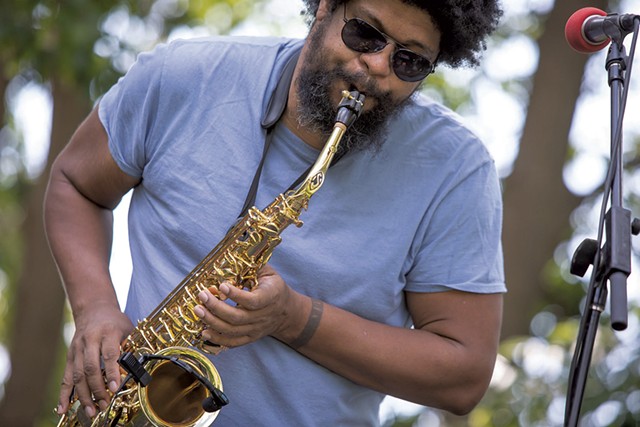 Over the weekend, the Vermont Symphony Orchestra webcast its closing concert of the season, the last installment in the series "Music for Days Like This." Previewed in last week's paper by Seven Days contributor Amy Lilly, the prerecorded event featured music, poetry and artwork by Black and brown composers and artists.

Reuben Jackson, former host of Vermont Public Radio's "Friday Night Jazz" program, emceed the show, delivering some of his own poetry. Local composer-musicians Ray Vega (the current host of "Friday Night Jazz") and Matthew Evan Taylor were also in the mix. Vega debuted a new VSO commission, "Buscando Doña Juana Figueroa," and Taylor presented his 2020 composition "Antsy." The program can be viewed at vso.org through Saturday, April 3, with virtual admission charged on a sliding scale.

Despite the concert's celebratory air, conflict lurked beneath the surface. On March 23, the day before last week's paper was published, Taylor sent letters to both the VSO board and this publication, expressing his reservations about the concert, how it was conceived and how it would be perceived.

Though he's quoted about his composition in Lilly's story, the Middlebury College assistant professor of music declined to comment on the record about the concert itself at the time of the interview. But Taylor later had a change of heart and voiced his concerns in the letter, which is available to view in full at the bottom of this page.

"I became concerned that if this concert were allowed to go forward without comment regarding its creation, it would be seen as a great achievement," Taylor wrote.

The gist of Taylor's letter is all too familiar. Though he holds the VSO in high regard and he gave the concert's designers credit for having good intentions — namely, centering BIPOC perspectives — he described the effort as "an awkward first step."

Taylor's primary objection was that his role was significantly changed and diminished as the event evolved.

"I was consulted on this project by VSO leadership on several occasions, and what started out as a positive dialogue quickly turned into an ever-widening mess where my voice, as the only BIPOC musician privy to the process, was silenced," Taylor wrote.

The origin of the concert goes back to last fall, when VSO executive director Elise Brunelle and Taylor began planning a series of educational webinars on composers of color for students. Brunelle highlighted the series when interviewed by Seven Days for a profile published in September.

But, as the pandemic inspired the VSO to create more and more online events, Brunelle and her staff reimagined the potential webinar series as a full-fledged concert experience. As the focus shifted, so did Taylor's role. Originally brought in at the conceptual level, Taylor found that every time his busy schedule allowed him to circle back to the project, changes had been made without his knowledge. Those were changes both to the program itself and to his involvement in it, "to the point that I just didn't recognize [it] anymore," he explained in a recent call with Seven Days.

"Yet, at the same time," Taylor continued, "my name is out there in the public associated with some project honoring Black composers."

"I think that his role in curating who would be presented was lost," Brunelle acknowledged by phone. "I fully understand his frustration with this. We shifted the focus, and with that, we're not following in what I believe the original intention was for his involvement."

The irony, as Taylor pointed out, is that, "in a process where you're trying to spotlight Black people, [they] silenced all of the Black people that are involved."

Additionally, Taylor felt that the event's new direction erased the work he'd already put in, leading to a conflict over compensation. Though he was paid for his composition's inclusion in the program, he said, he wasn't compensated for his time in the planning process.

The VSO's concert came together in a span of months. But to do a BIPOC-centered classical concert right, Taylor suggested, would take a year of preparation. He said he told the VSO that he imagined a concert that would not only center the work of Black composers but also elevate voices from a wider range of generations, as well as place a greater emphasis on female composers.

To be clear, Taylor isn't saying that the concert is an inherently bad thing, just that it shouldn't be seen as a solution to the diversity problem in classical music or in the VSO. As he wrote in his letter, "The overall process was self-serving for VSO and extracting from BIPOC."

"If it had been given more time, there would have been more BIPOC artists involved," Taylor told Seven Days. "I've been around events like this long enough to know that I didn't really want my name associated with it. But the bar is so low for inclusivity in this state that [the concert] would be seen as some sort of achievement by the public."

Brunelle agrees that the VSO needs to aim higher in its efforts toward inclusivity.

"What Matthew's letter has put back on the front burner, and very justifiably so, is the need for us to address this as an organization as a whole," Brunelle said. "[We need] to look internally: in our board structure, in our staffing, and who we spend our money with and who we consult when we create musical programming. It's a much deeper conversation."

Brunelle said the board has invited Taylor to participate in such talks, the first of which will take place this week. Taylor confirmed he plans to attend.

During my chats with Taylor and Brunelle, I asked them to comment on a trend I've observed amid the current racial reckoning: White people and white-led organizations of all kinds seem to be suffering from some kind of race-related FOMO. While that rush to inclusivity can be good, it also has harmful side effects, unintended as they surely are.

For instance, I asked Taylor whether he sees the VSO concert differently from the Flynn's late-summer 2020 outdoor series Hurly Burly, which also highlighted primarily (but not exclusively) artists of color.

"It just felt more organic," Taylor said of Hurly Burly. He described a process that began, pre-pandemic, with discussions of his potential role in the Burlington Discover Jazz Festival. Taylor said those talks were the foundation of his August Hurly Burly show at Pomeroy Park in Burlington's Old North End.

But he said even that event, which followed the release of his album Say Their Names and involved clear Black Lives Matter messaging, wasn't ideal.

"[After the concert], people were kind of lining up and talking to me, and this one person kind of started a debate with me [about] Black-on-Black crime," Taylor recalled. Though nothing happened beyond an unwanted, ill-timed and uninformed discussion, Taylor felt unsafe.

"That could have been a very dangerous situation for me," he continued. "He was kind of on me before I could have assessed if there was any danger. We've seen what people threatened by Black Lives Matter, at any level, will do."

That's part of a larger issue Taylor's noticed since moving to Vermont in 2017.

"It just doesn't occur to white people how dangerous some things are for people of color," Taylor said. "Because of the dynamics of the state, it's a lot more acute here than it is in the rest of the United States — although it's present in the rest of the [country]."

That's a huge thing for white people like me to understand. If your privilege precludes you from even conceiving of something, then you won't know how to create an environment that's welcoming, accommodating and productive for people outside that bubble of privilege. Talking to marginalized people and including them holistically in these processes is the only way for society to progress.

Another thing: I think a lot of people are feeling anxious that, once the pandemic is over and life returns to "normal," all of the progress that's been made in the wake of last summer's protest movements for racial justice will disappear. Taylor and Brunelle share that concern.

"I'm not interested in programming a repertoire that doesn't include [Black and brown composers]," Brunelle said of how the VSO will approach future seasons. "This should be a normal, ongoing part of our operations."

"Where is this gonna be when we get beyond this, when everybody can be distracted by things outside of their homes and not confronted by the realities that Black people particularly, and BIPOC in general, face?" Taylor pondered.

Time will tell. Personally, I'm hopeful. But I'm also a realist. In pretty much all situations, the key is communication. And a huge part — maybe the most important part — of communication is listening.

So keep talking, and keep listening.

Matthew Dear, "What You Don't Know"

Elvis Costello & the Attractions, "Everyday I Write the Book"