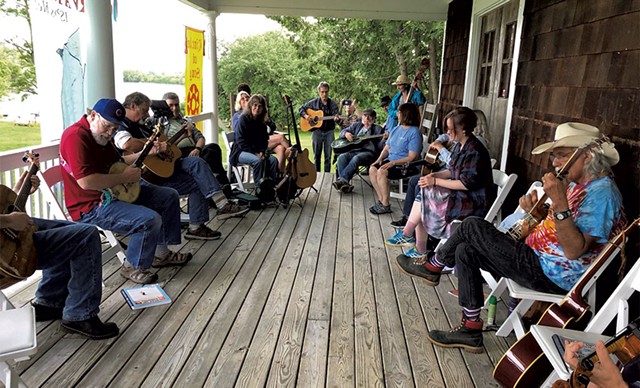 You know that thing where you watch a beloved film from your youth, only to discover that it, in fact, sucks? We've all been there. I still recall getting super excited to show a friend the movie Singles, Cameron Crowe's ode to the Seattle music scene in the '90s, easily one of my favorite films of my younger days. "Look," I said, "they're at a club and Alice in Chains is playing! That's Chris Cornell walking into the frame! Eddie Vedder is acting!" I also remember how quickly into the rewatch I realized that the movie was cheesier than Wisconsin and full of terrible romantic comedy clichés. Even worse, it reintroduced me to how bad Paul Westerberg's non-Replacements catalogue is.

The other film I tried to go back to recently was Independence Day. I know what you're thinking: We knew that movie sucked when it came out. You're not wrong! But it was the pandemic, I was bored, yada yada yada. I watched the thing, all right? Yes, it's still a bloated, big-action movie featuring Will Smith warming up his slapping hand on aliens instead of on Chris Rock. But there was one scene I still really enjoyed: when the scattered nations of Earth finally band together to coordinate the attack on the alien ships. Maybe it was the state of the world, maybe I'm just a sucker for a big team-up, but the thought of something binding us all together, even for a moment, moved me.

Whether or not we'd really join forces to fight off asshole aliens, I can't say. But we will absolutely get together one day a year to make music across the globe. How do I know that, you say? Because we already do!

World Music Day, which takes place every year on June 21, the summer solstice, is a daylong celebration of music and how it can bring people closer across cultural divides. The event started in France in 1982 as Fête de la Musique but quickly expanded into a worldwide jam, with tens of thousands of performances taking place in more than 120 countries on every continent.

Hundreds of cities in America have signed up to participate in World Music Day, but Vermont said, "Fuck that. Hold our maple syrup," and registered the whole damn state. Granted, our population is less than a borough of New York City, but the Green Mountain State is taking the event seriously, with music in Randolph, Springfield, Milton, Fairfield, St. Albans, Montpelier, Bennington and many other locales. Burlington will host music at multiple sites for the day, including City Hall Park, the Church Street Marketplace and the Andy A_Dog Williams Skatepark.

David Schein, who is coordinating the Vermont events on behalf of Big Heavy World, believes this is just the start for World Music Day here.

"This is going to become a big deal and will only get bigger next year," Schein said by phone. "We already have 50 or 60 spots booked, and more are still coming in."

One reason the event is gathering steam, according to Schein, is accessibility: Anyone can participate.

"One of the beautiful things about the Music Day phenomenon is that it's open and free to the public," he said. "A 4-year-old can play mud buckets as part of a library program and a wailing rock band can play in a club or a studio."

Schein himself plans to perform, playing his ukulele from his front porch — though he swears he'll change out of his pajamas and put on a pair of jeans to mark the event.

Some highlights of the day include banjo player and troubadour Rik Palieri holding a folk jam at Kingsland Bay State Park in Ferrisburgh. A large group of acoustic players and singers will spread out on the porches of the park's old cabins, playing from noon to dusk.

Randolph is actually throwing a parade for the big day, as well as featuring music across its downtown. At night, the music will shift to the Underground, a recording studio that is debuting a new venue at its downtown digs at 24 Pleasant Street.

"Our gem of a town will be exploding with music, showing the diversity and depth of musical talent," Randolph Arts & Culture Committee chair Jess Wilkinson wrote in a press release.

Brattleboro's All Souls Unitarian Universalist Church is getting in on the act, too, hosting music during the day. Pastor Telos Whitfield wrote, "Music is a powerful force for healing, the common language that transcends all boundaries. As we live through these complicated times, we need the hope and joy that music brings."

Want to participate in World Music Day? It's not too late! Registration continues right up until June 20. Just head over to bigheavyworld.com/makemusicvt and tell them where you want to make music. I'll give any aspiring trumpet players a little encouragement: Schein is still hoping to find a trumpet player to hike the Long Trail and play some tunes.

"I want them to find a nice cliff or something and play some Miles Davis, some long cornet chords," Schein said with a laugh. "I'd love if the bears and the deer heard some music on World Music Day."

Get your peg legs and wise-cracking parrots ready, because Rockin' Ron the Friendly Pirate is taking Vermont libraries by storm this summer.

The popular kids' musician and nautical-themed performer is bringing his wildly fun educational show to more than 20 libraries across the state, starting Wednesday, June 8, at the Fletcher Elementary School library in Cambridge.

Having reviewed some of Ron's work before, I can attest to the power of positivity in his songs, such as "She Can Be a Captain, Too" and "Pirates in Outer Space." He covers a gamut of educational topics, all while expertly bending musical genres. That shouldn't be a surprise, considering Ron graduated from the Berklee College of Music and won the Richard Levy scholarship for composition.

So, bring your tykes, practice your Arrrrrs, maybe eat some citrus to fight scurvy, and head to your local library for some good times and sing-alongs.

Man, oh man, do I love some touring drama! Having been on a few terrible tours myself, you'd think I'd be more sympathetic, but touring drama is my break-out-the-popcorn time. I love all the greatest hits of tour drama such as: Van fights! Leaving the bassist in Des Moines! Eating the headliners' food! (If you're reading this, Wolf Parade, it was me who devoured that delicious-looking entrée outside your green room. I'd do it again, too! Bwahahaha!)

The latest tour drama involves southern Vermont's own Saving Vice. The metalcore act was all set to embark on a big U.S. tour supporting nu metal act the Dropout Kings and rapper Lil Xan, before headliner Xan pulled out at the last moment. Citing struggles with sobriety and unhappiness with Dropout Kings' management, Lil Xan essentially stranded both the Dropout Kings and Saving Vice on the road, with multiple canceled dates.

Saving Vice vocalist Tyler Small commented on the situation, throwing some doubt on the rapper's claims.

"Lil Xan did this to himself," Small wrote in a press release. "This had nothing to do with the agents, they were doing their jobs. He came up with a list of excuses, but, long story short, we are doing the best we can to salvage the rest of the tour."

Small pointed out that members of Saving Vice are, in fact, sober, and drummer Sam Whelton is actually working as a recovery specialist.

The Dropout Kings had even more shade to throw, taking to Instagram to drag the "Betrayed" rapper, whose Born Dead clothing line was also sponsoring the tour.

"Straight up fuck Lil Xan 100%," the band wrote. "Dude is a total piece of shit for doing this to all the artists and staff involved in this."

Saving Vice and the Dropout Kings are working to put the tour back together, redubbing it the "Fuck Lil Xan Tour."

The program, hosted by Mary Engisch of "Weekend Edition," started during the pandemic after NPR's nationally syndicated live music program "Live From Here" ended. Left with two hours of programming to fill, Engisch and her husband, musician and engineer Peter Engisch, launched "Safe and Sound," which showcases the best of Vermont music. One hundred episodes later, the show is still playing tunes and letting listeners know that "there's so much more to Vermont music than three people in a folk ensemble," as Mary told VPR.