Soundbites: Madaila — Where Do We Go From Here? 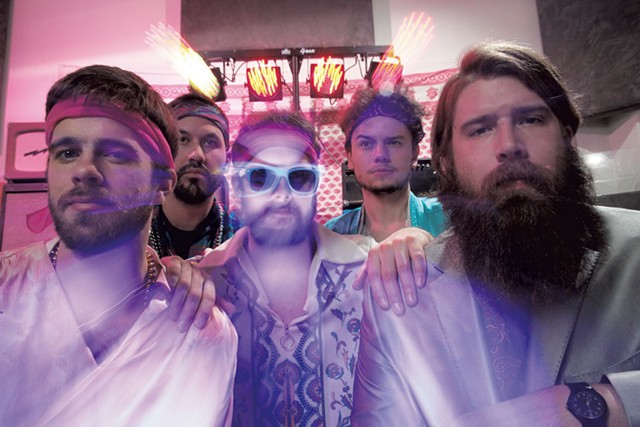 Several weeks ago, news broke that Burlington psych-pop band Madaila are going on indefinite hiatus. The band enjoyed a meteoric rise throughout the last several years, playing high-profile gigs at home and abroad. From early on, the group seemed primed to make the jump to the "next level," fueled by an ecstatic local fan base.

But life had other plans. Recently, the band's front person, songwriter and primary creative force Mark Daly became a father. Also taking into consideration the harsh realities of being an indie band in 2018, Madaila have decided to take some time apart. They perform what's being billed as "The Last One" on Friday, November 2, at the Higher Ground Ballroom in South Burlington. Seven Days recently spoke with Daly and bandmates Eric Maier, Jer Coons and Walker Allen.

MARK DALY: Well, there's so much depth to it. It's kind of been a long process. It's hard to know how to summarize it or where to begin. It was definitely brought on by me. I take responsibility. I've been agonizing over this for a long time.

Probably about a year ago, I was getting a little wary of being on the road — even before my son was born. But then, when he was born, it made things even more confusing. That doesn't even touch on the trials and tribulations of being on the road and slugging it out. We've all been doing it for a long time. By no means are any of us giving up. It's more, How do we step back to refresh our minds, bodies and souls?

SD: I'm sure there wasn't one specific moment when you realized you needed to step back. But is there one that sticks out as a turning point?

MD: I had a bit of a cathartic breakdown in Lawrence, Kan., in February 2017. We had just played a gig to, like, two people. And we got hammered, 'cause why not? It was not all sad-crying. It was the foreshadowing. I was like, "I'm having a son! Oh, my God." And, also, "Can I keep doing this?"

ERIC MAIER: We quickly got to this next tier that a lot of bands can't get to. And we were really grateful for [that]. It's a lot of grinding on level two, trying to get to a place where we can make some money and have a little comfort.

MD: I'm so grateful, and so in love with this child of mine. But it was certainly not the best timing for our band trajectory. We had momentum and, you know, often these big life complexities can interrupt that momentum.

SD: What about the business side of things? What else was going on that made it hard to thrive?

EM: Mark and I kind of experienced this in our first band, Chamberlin. Grace Potter took us out. We'd never even been on tour. We'd played, like, four gigs and went out on this huge tour. It gave us this kind of shot out of the gates. It's kind of hard to beat the five-year-growth thing — especially around here.

We did so well and came in so hot that people did start treating us similar to a national act. But when you're 2 or 3 years old, you still have a lot of investment time to put in. I think the timing wasn't great because we were still kind of eking it out.

MD: It's so much easier when you're 20. The reality is, we're all getting older. New chapters are beginning.

SD: Will there be another Madaila album?

MD: Time will tell. There probably should be. There's something that's pretty close to being done.

EM: It's tough to want to put energy into it at this point.

SD: Sure. It's like trying to save the environment.

MD: Exactly. We've still toured and done stuff this year, but it's slowed down a ton due to me having a kid. And there's been a lot of uncertainty for all of us. That's why we thought it was a healthier decision to take some time off completely rather than being half in, half out. That's almost more frustrating.

SD: I dare say, despite the title of the upcoming show, it's not really the last one. Right?

JER COONS: It's gonna be the last one for a while. There are zero plans for a follow-up. Consider it the last one. But [it's good] that all of us are sitting here and aren't like, "Fuck you!" It would've been a lot easier to be like, "I'm mad at you guys." Everything feels good. It's just a situational life reality. You almost wish with any sort of breakup or hiatus that there was this concrete, go-fuck-yourself moment, because it would be easier to pull the Band-Aid off. I'm not mad about it. We're definitely keeping the door open.

MD: Friday is going to be an emotional, hard night. We do want to make it so fucking fun and celebratory. But there will be this thing in the back of our heads.

EM: It sucks for everyone. We've all grown a ton professionally through this. Personally, after already being in a band with Mark that ended before it probably had seen its full potential, intellectually I feel great about what's coming next. But emotionally, it sucks. We've been a family in a lot of ways for three or four years. These have been the most important people to me.

SD: Walker, as the newest member of the band, how much of this stuff was openly talked about when you joined a year ago?

WALKER ALLEN: Around that time, I would say the band was entering a new phase and losing a little steam with the loss of Mark [Balderston] as manager.

WA: In December, we dropped the agent we had. Then we were doing this on our own. And there was this [question] of who's really pushing. But we also got to do a lot of cool shows.

MD: I'm the first one in the band to have a baby. None of us knew what it was going to be like. Maybe we should've taken a break last summer, right when he was born. Shoulda, woulda, coulda.

SD: Earlier this year, when you released "Where Do We Go From Here," were you hinting at any of this? You painted it as a political song, but I couldn't help but think there might have been some subtext.

MD: [Laughing] No, that was purely political.

SD: Is it cheesy to ask about your favorite memories? Maybe something that happened out of town?

EM: I would say anytime we flew. When someone flies you somewhere to play music, it just feels dope.