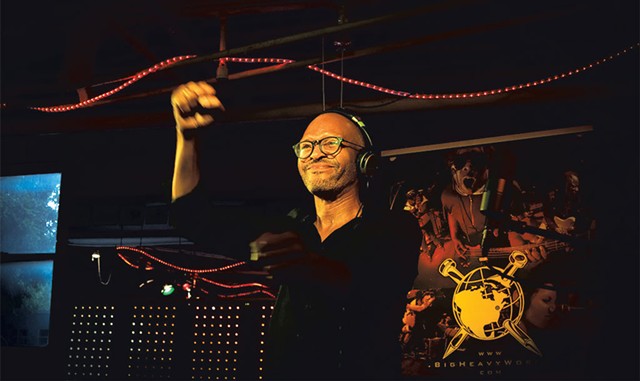 Hey, it's a big week for the local music scene in this issue!

Hopefully, you've already perused my story about Fattie B and his frankly bonkers new album, GUMBO. While it's certainly not my first cover this year, it is the first stand-alone music story I've written solo for the paper's marquee spot. (Culture coeditor Dan Bolles and I teamed up on a Waking Windows cover package back in May.)

We couldn't think of a more perfect cover story subject than Fattie. As an MC and a DJ, the dude has been front and center for so many happenings in Burlington's music scene over the past 30 years, but he's never before attempted something as ambitious as GUMBO. The record is beyond worth checking out, even before you factor in that it's a charity album, raising proceeds for Boston Children's Hospital. Listening to a killer hip-hop record and doing a good deed during the holidays is next-level living, folks.

The other nice thing about having a music story on the cover is that I get to go into a little more depth on it in my column. One part of Fattie's story that very much intrigued me was a notion he and other interviewees expressed: that the Burlington music scene has been hopelessly sundered since the halcyon days of the '90s.

Back then, the likes of Fattie's Belizbeha, Phish, ViperHouse, Chin Ho!, Wide Wail and the Pants ruled a scene where it seemed like every club that could fit a PA had bands playing most nights of the week. To hear Fattie and Craig Mitchell tell it, as well as many other elder statespeople of the scene, the loss of live music venues in Burlington has prevented area musicians from working together as frequently as they once did.

According to Fattie, artists a few decades ago benefited from an incredibly strong spirit of collaboration, regardless of their genre. For evidence, one could cite the scene-wide compilations produced by the late local music zine Good Citizen, or Fattie's own Hop comps. Fattie also pointed out that shows were more eclectic in those days; it wasn't outlandish to see hip-hop, rock, acid jazz or country acts and DJs all on the same bill.

Listening to these reminiscences, I had to ask myself: Is today's scene really fractured, or is this a case of older artists just not recognizing how new scenes work? Maybe it's a little of both.

Burlington definitely has fewer venues where artists can play these days. While I can't speak to the '90s scene, I know that when I started playing gigs in and around Burlington in 2002, you could find live music not only at traditional rock clubs but also at Rí Rá, Finnigan's Pub, Mr. Mikes, Manhattan Pizza and Pub, 242 Main, the Waiting Room (now Pizzeria Verità) — hell, even the VFW had punk shows. Red Square was full of bands almost every night. The Church Street nightclub still has live music multiple times a week, but most of its schedule is filled with DJs.

"Burlington used to be a live music town," Mitchell told me last week. "There's still so much great stuff happening, but it's a lot harder to find a band on a given night of the week than it used to be. DJs took over."

Mitchell is uniquely positioned to make that assertion, being successful both as a musician and as a DJ.

"Having a DJ is great," he said. "It's nothing against booking DJs; there are some amazing DJs in this area. But the balance has been off since club owners figured out how much cheaper it is to get a DJ instead of booking bands."

Far be it from me to argue with someone like Mitchell about DJ culture. Nor am I going to contest his claims, given that every booker I talked to agreed: Booking DJs is just cheaper.

It's worth noting, however, that Burlington's current music scene still boasts loads of live music venues. Radio Bean, Nectar's and Club Metronome, the Monkey House, Foam Brewers, and the 126 are all spots where live music remains king.

As for collaboration, well, Burlington could certainly use a little more among its bands. The idea of a new Burlington Does Burlington album is so tantalizing. Lily Seabird covering Eric George? The Discussions taking on an IvaMae song, maybe? Rivan C. doing a remix of an Eye Oh You track? Take my fucking money. (Ha. That's funny. Music costing money. Sigh.)

There may be help on the way, though. Among the many local artists who have been pondering this very issue are blues and soul duo Dwight + Nicole.

"Dwight and I have been fantasizing for a while about going on tour with other Vermont musicians, a sort of local music revue," Nicole Nelson told me during an interview for the Fattie B cover story. "It would be so fun to do a theater tour or something and just put the unity and friendship that exists in our scene out there for everyone to see."

They'll test out that idea on New Year's Eve when they play a showcase at the downtown First Unitarian Universalist Society of Burlington. Fattie B himself will join the group, as well as roots rocker Ali McGuirk and Burlington-via-Madagascar singer-songwriter Mikahely.

I can only hope that albums like GUMBO and shows like Bob Wagner's local star-studded '72 Review gigs and Dwight + Nicole's planned NYE party will keep pushing our local musicians together. The more unified Burlington's music scene is, the better it is for everyone. 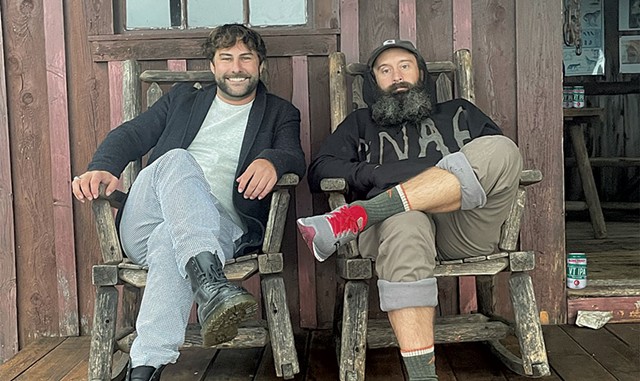 Things are getting funny down in southern Vermont. From Thursday through Sunday, December 1 through 4, the inaugural Vermont Comedy Festival will bring local and touring comedians to an array of venues in the area, including Ramunto's Brick & Brew Pizza and Long Trail Brewing in Bridgewater Corners; the Grange Theatre at Artistree Community Arts Center, Theatre & Gallery in South Pomfret; and the Rivershed in Killington.

The festival was founded by comedians and actors Matt Vita and Collen Doyle, the latter of whom owns the Woolen Mill Comedy Club in Bridgewater. The two met during a virtual comedy show and went on to become comedy-minded business partners and dream up the festival.

According to a press release, one goal of the Vermont Comedy Festival is to highlight business owners and members of the comedy community as they "com[e] together to nurture and support what will surely prove to change the landscape of entertainment in the region for years to come."

The festival closes on Sunday at Pentangle Arts in Woodstock with a headlining set from New York City-based comedian Joe List, who recently appeared on "The Tonight Show Starring Jimmy Fallon" and Netflix's "The Standups."

For more information and to snag tickets, check out vermontcomedyfestival.com.

Indie pop singer-songwriter Francesca Blanchard released a new video this week, "je sais plus quoi te dire." Shot and directed by Galin Foley, the vid finds Blanchard leaning into the French ingenue side of her musical profile. As she sings over a '60s pop jam, with just a few touches of modern production, the Burlington-based chanteuse alternates between swaying drunkenly with a cocktail in hand, smoking cigarettes as she shoots smoldering glances into a rearview mirror and lounging seductively in front of a fireplace. It's a vibe, and Blanchard and Foley absolutely nail it.

To celebrate the video, Blanchard will play a show on Friday, December 16, at the Winooski United Methodist Church, which she described as her last performance with the full band "for the foreseeable future." So don't miss it!

Recorded over two nights in August in front of a live audience at Tank Recording Studio in Burlington, the album boasts an eclectic mix of jazz, progressive and post-rock sounds. Boyes' massive band features performances from Burlington poet Rajnii Eddins, along with four vocalists, two percussionists, 12 horns, guitar, vibraphone, Rhodes piano and bass. Myles David Jewell filmed the sessions, which are up on YouTube. A release party for Saturn People's Sound Collective is planned for Saturday, December 17, at the Goddard College Haybarn Theater in Plainfield.

Singer-songwriter Emma Cook releases a new single on Wednesday, November 30, called "Meet My Maker." The Michigan native and University of Vermont alum recorded most of the song back in her home state with her Emma Cook & Questionable Company drummer Andy Feltus before finishing it up in Vermont, adding fiddle from the Wormdogs' Danica Cunningham.

According to Cook, "Meet My Maker" is a tune about growing older and the anxiety and subsequent reality checks that follow. "While it's a little melancholy, it's a little hopeful," Cook wrote in an email. "As we grow older, might we grow wiser and embrace change."