Soundbites: Jazz It Up

You kids like the jazz. Or maybe you don't. I mean, what is jazz, really? While you ponder that pointless question, the Burlington Discover Jazz Festival looms on the horizon — this Friday, June 5, to be precise. And the 10 days and nights that follow will be loaded with more jazz, jazz-funk, jazz-blues, jazz-gospel, jazz-soul, jazz-hip-hop, jazz-rock and jazz-jazz than you can shake a jazz flute at.

If you want a highly educated take on some the marquee acts at this year's fest, turn to the cover story on page 30, where Vermont Public Radio jazz DJ Reuben Jackson drops some serious knowledge. And if you want tips on how save some money and still work your jazz hands into a tizzy, check out the feature on lower-cost shows on the facing page. If your tastes are more of the locavore variety, stay right here. For the next two weeks, this column will deal almost exclusively with our homegrown hepcats.

This is my eighth year covering the BDJF. And every year, I write some version of this sentence: Some truly transcendent moments at jazz fest happen in the smaller venues off the beaten path and away from the glow of the Flynn marquee. That's not a knock on the living legends who hold court on Burlington's biggest stage during the festival. Rather, it is that, true to its name, discovery is real theme of BDJF.

Every year I see at least one BDJF show I didn't know much about going in that absolutely floors me, often many more than one. And every year plenty of local acts are in that category. So what follow are some of the better bets to fit that bill during the festival's first week.

We begin with Madaila. I know what you're thinking: Madaila are about as much a jazz band as Maryse Smith is a Swedish death-metal act. However, the ascendant pop band is headlining the fest's opening kickoff bash on the top block of Church Street on Friday, which is traditionally one of the best parties of the festival. No, they're not jazz. But they're a hell of a lot of fun. (Besides, have you seen the lineup for the Montréal jazz fest? Since when are the Barr Brothers, Lucinda Williams and Ghostface Killah jazz? But I digress.)

Moving on, you could probably spend the entire festival at Radio Bean and have a great experience. The lineup at the li'l hipster haunt that could is really impressive, and loaded with Vermont talents past and present. Friday is an especially good night to set up camp at the Bean. Start early with Antics Unadorned, an acoustic version of neo-soul upstarts Smooth Antics. That band features sultry siren Stephanie Heaghney, who is one of my favorite young vocalists in town. Stick around for Dan Liptak's 10-member world-jazz powerhouse, APEX. Following that band are porn-prog progenitors Japhy Ryder, who remain one of the most daring local bands in Burlington — they'll also be at Red Square on Monday, June 8, BTW. Closing out the night are local jazz fusionistas Vorcza. Speaking of Vorcza, bassist Rob Morse will debut an intriguing new ensemble at this year's BDJF. More on that next week.

The neighboring Light Club Lamp Shop is similarly loaded. I'd bookmark Pfeiffer and keyboardist Peter Krag on Saturday, June 6; jazz titan James Harvey and Miriam Bernardo with Michael Chorney on Monday, June 8; and Chorney again on Tuesday, June 9. On the latter date, the Chorn Dog — I'm only allowed to call him that during jazz fest — is playing alongside Taylor Haskins, a Grammy-winning trumpeter who recently relocated to upstate New York and has been making the rounds with local players. 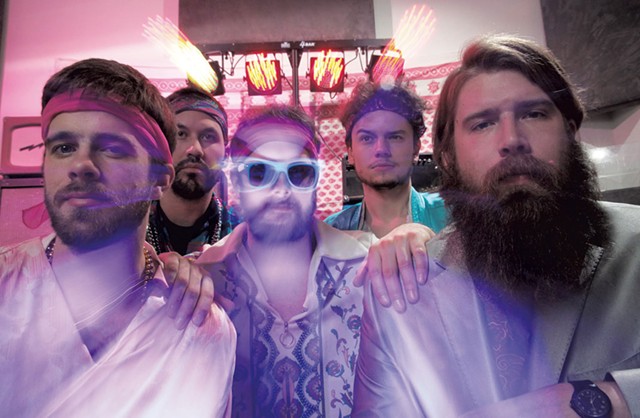 American Flatbread is another great spot during jazz fest, especially if the weather holds for the funky outdoor stage. That tradition should continue this year with Anthony Santor on Friday, June 5; classical Arabic ensemble Grup Anwar on Saturday, June 6; and the Jake Whitesell Quartet on Sunday, June 7. Midweek highlights include Latin jazz from Rauli Fernandez on Tuesday, June 9; and Vorcza on Wednesday, June 10.

Most folks know him as Burlington's house music godfather, but Craig Mitchell is also a dynamic vocalist. He'll be singing classic soul and funk backed by Cody Sargent at Leunig's on Saturday, June 6. As always, the jazz fest calendar at the Church Street bistro is loaded with solid local talent all week long. And as everyone knows, jazz always sounds better while you're eating steak frites.

The Skinny Pancake's locavore slate really gets cooking next week — musically, anyway. However, all of their BDJF shows this week are free, including Philly-based hip-hop and funk band Ill Doots on Friday, June 5; New Hampshire jamtronica outfit Elephant on Saturday, June 6; and the last night in Arc Iris' recent SP residency on Sunday, June 7.

As always, Nectar's is a BDJF hot spot, with great shows all week, including late afternoon and early evening combos by the garage door. But the true gem is machine Guns and Rainbows: Band of Gypsys Revisited on Tuesday, June 9. Indomitable Soul Band guitarist Bob Wagner is reimagining Jimi Hendrix's iconic 1970 live record, because, as he puts in an open letter to Hendrix fans, "I'm a guitar player, which makes me, at least to some degree, an asshole."

Wagner is no asshole. He's actually one of the nicest guys I know, not to mention a monster guitarist. He's also taking some creative liberties with the album, adding two female singers and three horns to the core trio. The end result is one hell of a lineup. Joining Wagner are Rough Francis drummer Urian Hackney, ISB bassist Josh Weinstein, vocalists Kat Wright and Nicole Nelson, and the brass section from ISB: Jake Whitesell, Luke Laplant and Dave Purcell. Interesting side note about this show: Opening is DJ Brother Mister, who'll be spinning classic soul, funk and R&B cuts. DJBM is maybe a little better known by his given name, though: Christian McBride.

Last but not least, earlier this week, the BDJF announced the creation of the Paul Brana Memorial Fund. Brana was a tremendously talented young local trumpet player who died unexpectedly last July. He had been involved with the festival since he was student at South Burlington High School, performing first with the school band on the Church Street Marketplace and later with the Vermont All State Jazz Ensemble. Once out of school, he played with his teachers in the Discover Jazz Festival Big Band and other combos. A mere month prior to his death, he was part of a local tribute to the music of Art Blakey during BDJF.

Though I'd seen him play, I didn't know Brana. But, Burlington being Burlington, I know plenty of folks who did and who felt a profound loss in the wake of his passing. Established through donations from his friends and family, the memorial fund strikes me as a particularly fitting tribute. The money will be used to help connect local musicians with resources and programs to help instill and cultivate a love for music in the next generation of great young local players. Players like Paul Brana.

For info on donating to the Paul Brana Memorial Fund, visit discoverjazz.com.