Why You Gotta Be So Rude?

Anyone who's been single in Vermont knows that the dating scene here can be rough. Like, really rough. Our isolated communities and slow trickle of newly arrived singles are probably what make it so tough for lonely hearts to connect in the Green Mountains. I have a little saying about it: Vermont is BYOB — bring your own boo, or go without.

But according to my sources, finding love — or even just some good lovin' — is just as hard in a thriving, vibrant metropolis like New York City. This week, a few comedians from Gotham descend on Burlington for "Rude: A Comedy Show." Burlington expats Jade Marcotte and Kendall Farrell host the one-off event highlighting queer voices on Sunday, January 26, at the Vermont Comedy Club.

Farrell, named Vermont's Funniest Comedian in 2015, is also known for hosting another local queer showcase, "LGBTQLOL," which still materializes now and then, even though its founder is no longer local. Along with locals Liz Thompson, Tracy Dolan, Gladys Dee and Shani Stoddard and NYC-based comic Xazmin Garza, the comedic crew delves into the dark and dirty corners of modern dating. Garza also headlines "Comedy & Crêpes" on Monday, January 27, at the Skinny Pancake in Burlington.

"I get sexually harassed a lot," Marcotte said in a recent phone call. "One time, I got a DM [that read], 'You have big boobs but you're rude." Despite the fact that Marcotte thinks it was horrible and "such an odd thing to say," the line did give her the title for this week's showcase.

Much of Marcotte's material comes from growing up black in the Northeast Kingdom, one of the whitest parts of one of the whitest states. Before making the move to the city, she hosted "The Darker Side of Comedy," which featured comedians of color.

"I didn't meet a person of color until high school," said Marcotte.

But her "Rude" set mainly focuses on the uphill battle of modern romance. She said she's been on "hundreds of dates" in the past couple of years since moving from Vermont to the Big Apple, and "only about 10 have been positive."

"There are just so many people," she said. "People can kind of just be however they want to be toward you, because they know there's another 8 million people to come after you."

Given the subject matter, attendees can expect the show to get pretty raunchy.

"I find sexual humor the funniest thing in the world," said Marcotte. "I'm a gross comic. The things I have to say are disgusting." 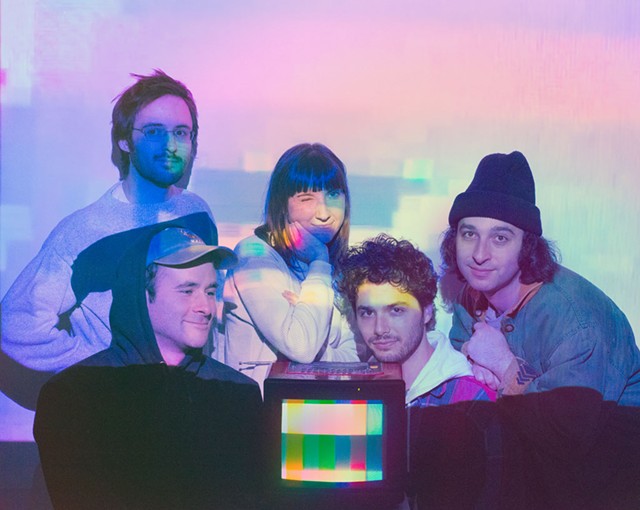 Folk-rock singer-songwriter Spencer Lewis gives his first concert in Burlington since 2007 on Saturday, January 25, at Congregation Ruach haMaqom. The Randolph-based artist has one of the thickest music catalogs, locally speaking. His latest album, 2019's sprawling instrumental folk record Riffs on a Broad Reach, is just one of 19 currently available to stream on Spotify. Lewis will perform solo, utilizing live-looping to layer guitar and violin in "unpredictable directions," he wrote in an email.

Queen City psych-pop outfit Bleach Day are soon to make a long-awaited return with their upcoming sophomore album, as if always. Originally the brainchild of Louie Kiley and Vinny Marksohn, the group has expanded to a five-piece to include Jon Kraus and Mitch Manacek, both of garage-punk ensemble the Bubs, as well as experimental electronic artist Amelia Devoid. Bleach Day's 2016 debut, Where to Dream, was a wonky analog hallucination of mind-numbing indie rock. New singles have yet to surface.

Speaking of long-awaited follow-ups: Despite the fact that "free-bleeding" indie-rock band Julia Caesar broke up in mid-2019, their debut album, MARS, is very close to completion, according to the band's Liz Stafford. Look for a posthumous review in the coming weeks.

The Grand Point North music festival recently confirmed its 2020 dates. Produced by Higher Ground Presents and Grace Potter, the event returns to Burlington's Waterfront Park on Saturday and Sunday, September 12 and 13. No headliners have been announced yet, but given that it's the fest's 10-year anniversary, expect big things. Ditto for Waking Windows, which takes over the Onion City from Friday, May 1, through Sunday, May 3. Are any other major local festivals celebrating a decade of merriment this year?

Two-second rant: There are hardly any good places to sit and watch music at Orlando's Bar & Lounge in Burlington. Despite being a spacious venue with more than adequate seating, a large support column in the center of what could be the dance floor completely rock-blocks most sightlines to the stage. I hadn't really noticed until I showed up for Hotel Karaoke on a recent Tuesday.

Now, I'm no architect. I understand the concept of a load-bearing post, wall, beam, etc. But isn't there a way to transfer a load? Something about joists? If only the subterranean space could eliminate that central pillar, it would really open things up. What do you think, Orlando's? Are you up for a potentially exorbitant construction project with a relatively small payoff?

Depeche Mode, "World in My Eyes"