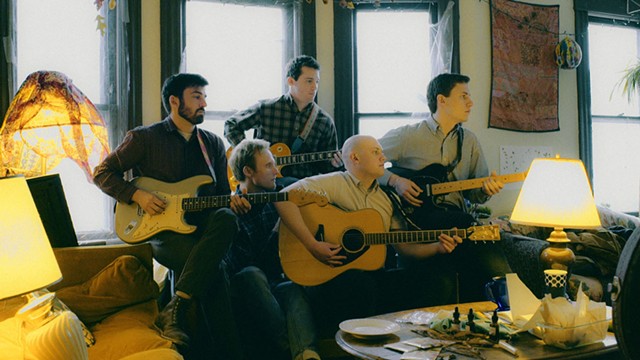 Where do you draw the line between contentment and apathy? Are they really that different? Yes, but it's easy to confuse them when you're buried in self-doubt. Anyone who's struggled with depression can tell you that it's often difficult to distinguish between the two. And, if you're like me, you'll probably drive yourself up the wall in doing so.

For instance, you might think to yourself, I like my life right now. I'm doing well, and I have everything I need. Why would I change anything? But maybe there's a little voice in your head that says, "But what about this? You always said you wanted to do this, and you still haven't. And what about them? They need you right now. Get off your lazy ass."

And then there's the paralyzing fear that you might fail if you were to do something you're not already doing. Now you feel bad both for the mistakes that you might hypothetically make and for assuming you're going to make them. And then you don't do anything. It's a vicious cycle.

I bring up all of this because of a new music video from Burlington indie-rock dynamos J Bengoy. Visuals for "Armchair," a cut taken from the quintet's debut LP, Dogwood Winter, arrived on the interwebs last week. A bleak (and grammatically horrifying) message accompanied the clip in a Facebook post: "This is 'Armchair'. a song about apathy. about what happens when the nothingness implodes." Since watching the video, I can't stop thinking about my own struggles with apathy. I suppose that's the damn point.

With visionary director Kayhl Cooper at the helm, as well as cinematographer Jack Whitney, the piece is one of the most visually striking music videos to come out of the Vermont scene during my two years serving as Seven Days' music editor. You've probably seen some of Cooper's other work, such as production company Noise Ordinance's studio sessions, Waking Windows' recaps, and videos with singer-songwriter Francesca Blanchard and indie-rock legends the Essex Green.

Cooper's strength lies in his stark approach to mise-en-scène, his preference for confrontational, slow-burning push-ins, his impeccable framing and his gift for timing. If you aren't already aware of this fine young talent, get on it. The dude's going places.

Filmed in the dead of winter, "Armchair" finds the Ben-boys taking turns sitting slumped in a ratty green recliner. The chair appears all over the city: a typical B-town apartment, the parking lot and aisles of the Old North End Variety store, a highway overpass, a graveyard, and in the back of a pickup truck cruising the streets. There's also a delightfully robotic dinner sequence that devolves into a head-banging frenzy as the piano-rock tune reaches its climax.

And, of course, the powerful performances from band members themselves are more than worthy of a shout-out. The gift of knowing how to play a scene — and how your actions and facial expression will come across in the final product — isn't something that comes easily. Presumably under Cooper's strong directorial hand, the group's five members are convincingly products of the dour world created for the video. Kudos, fellas.

As summer ends and winter approaches, you might want to watch the video a few more times to remind yourself not to slip into the familiar, seductive patterns that return during December and January's darkest days. I know I'll watch it again.

You can see the video at jbengoy.com — and you can catch the band live next week during the South End Art Hop on Friday, September 7, at ArtsRiot in Burlington.

If ever there were a time to drop everything and run like the wind to the Vermont Comedy Club, Thursday, August 30, would be it. The club's in-house long-form improv team, the Unmentionables, presents a particularly intriguing event called Period Underwear. Methinks this is not a show for the little ones.

Essentially, the troupe plans to do an entire show "dressed only in the latest lingerie, silk underthings, and gymnasium and swimming costumes of the day." Given the overly courtly nature of the event flyer's wording, we can assume the show will take place within the nebulous era known as "yesteryear."

The faux-parchment-paper digital leaflet continues, "The actors will present a farcical romp through a fantasy world heretofore unimagined by man or woman!" That's Shakespearean-era English for "improv."

Also, Jaz Entertainment portrait photographer Morrell Bunbury will be on-site, taking free daguerreotype-style portraits. If you're not familiar with daguerreotype photography, or are unable to google that shit, whatever pops into your head when you think of "olde-timey" portraits is probably close enough.

So, to sum up: The Unmentionables are doing a show in their underwear. I probably could've just left it at that.

Where the Wylder Things Are

Waterbury's yoga, food, music and arts hub Zenbarn hosts a bike-in film festival on Friday, August 31. A benefit for the Waterbury Area Trails Alliance, the event encourages attendees to arrive on bicycles. If you're coming from Montpelier or Burlington, you might have to pedal quite a ways. But for a serious cyclist, it's probably not that big a deal. Cycling newbs like me might drive into town, park a few blocks from the fest and cruise over.

The lineup focuses on outdoor-recreation-related films. Screenings include Simon Perkins' "Ascend," which focuses on Jon Wilson, who, despite having lost a leg to cancer, is still an intense cyclist; and Ben Page's "The Frozen Road," a self-shot documentary chronicling the filmmaker's bike journey through the Canadian Arctic, among others.

After the film portion of the evening, Boston-based folk-rockers Billy Wylder — fronted by BTV expat Avi Salloway — take the stage. The group recently dropped the laid-back single "Roar of the Wild," the first missive from its forthcoming album Strike the Match. The album comes five years after the band's last effort, Sand & Gold.

Tourist, "We Stayed Up All Night (Feat. Ardyn)"

The Internet, "It Gets Better (With Time)"