Last week, I wrote a review of Bow Thayer and Perfect Trainwreck's latest album, a live record called Eden: Live at the Chandler. In that review, I questioned why the record had been released as a stand-alone album, given that it was a recording of a show at the Chandler Music Hall in Randolph, in which the band played its most recent studio album, Eden, in its entirety. My take was that those who were buying the live album would be better served by the studio recording, since the differences in performance and arrangements between the two were negligible and the sound quality of the studio version was vastly superior.

Particularly given Thayer's track record, I was surprised and, quite honestly, disappointed by Eden: Live at the Chandler. I've been a fan of Thayer since the early 2000s, when I used to go see his old band, the Benders, play at an Irish bar called the Burren in Somerville, Mass. I've followed his career, on both personal and professional levels, ever since. A consummate pro, Thayer has always gone to great lengths to provide his fans with the highest-quality material he could, which is why I was dismayed by his live album. But it seems I arrived at my conclusion, not to mention my disappointment, in error.

Due to a series of miscommunications for which I take my share of blame, my review of the record was based on an incomplete picture of what Thayer and Perfect Trainwreck had actually produced. I was sent a burned promo copy of the record and an accompanying press release by his promotional team. What I missed, and what would have altered my overall impression of the download-only album, were the digital liner notes, which had been sent in a string of other emails about the record but that I had somehow overlooked.

In those liner notes, Thayer explains that the Chandler show was one of the band's last, which makes the live album something like Perfect Trainwreck's The Last Waltz. And speaking of the Band, Eden: Live at the Chandler was mixed by engineer Justin Guip, who also manned the controls for Levon Helm's Grammy-winning live album, Ramble at the Ryman.

Thayer writes that the idea was to capture his band, which barely ever rehearsed due to geographical limitations, in a live setting before they broke up. Eden the studio album was recorded piecemeal, with members adding their parts at odd times and from various locations. So the Chandler show was actually the first time Perfect Trainwreck had performed the music together in the same room. That fact alone makes the live record intriguing. It's also worth noting that the Eden: Live at the Chandler package includes video footage from the show. Those clips wouldn't have colored my review of the live album one way or another. But it does suggest Thayer wasn't just trying to get more mileage out of his record.

I still contend that a live record composed of a performance of a studio album is at least a curious move, better suited as bonus material than as a stand-alone piece. Even given the chance to listen again via lossless audio files, as opposed to the MP3 files from my promo copy, the live album's fidelity is inferior to its studio counterpart, despite Guip's eminently skilled hands and ears. Using ALAC or FLAC files, the sound quality is certainly far finer than "only a notch or two above a soundboard bootleg," which is how I described it in my review, based on what I had to listen to. But the studio version is, in my estimation, the better listen. And since the material is largely the same, that's a valid distinction.

But here we run headlong into an ages-old conundrum in music criticism. Namely, that beauty is in the ear of the beholder. In a comment on the online version of the review, a Thayer fan who was at the Chandler show defended the live album, writing, "I can feel the magic energy of that night when I listen."

Clearly, for some, Eden: Live at the Chandler is not only a worthy addition to the band's canon, it's an important document of a special, final chapter in Perfect Trainwreck's story. Regrettably, it's a chapter I misread.

Now that I've reset the "[Blank] Days Since a Colossal Screwup" sign above my desk, let's talk about debauchery!

For a few years, the Full Moon Masquerade was one of the wildest parties around. Spearheaded by Scott Mangan, the monthly-ish bash featured all manner of music and art and was consistently a great time, whether at the old Parima, Nectar's, Club Metronome or, most recently, Signal Kitchen. Mangan has since moved to New York City, and when he left, the Masquerades stopped. But I'm delighted to report that on Wednesday, May 14, at ArtsRiot, the FMM lives again.

In a recent email, Mangan confirms that he's handed off the FMM brand to the industrious ArtsRiot/SK crew.

"One of the big reasons I brought the event to SK was because I knew where they [Alex Lalli and Felix Wai] wanted to take SK and ArtsRiot, and when I left town I really wanted the event to take that trip with them," he writes. Mangan adds that he still consults on the lineups, and that the FMM parties are booked through the summer.

This time around, the festivities are headlined by renowned local jazz-fusion band viperHouse. That group, led by local composer Michael Chorney and featuring several of the area's most accomplished players, was popular in the late 1990s and early 2000s. In recent years, they've played a couple of reunion gigs, most notably as part of the 2011 Burlington Discover Jazz Festival. But Chorney writes in a recent email that the FMM gig will be the band's last.

The previous VH reunion gigs were in "concert" settings. But the irresistibly danceable viperHouse were at their most dynamic in a club setting. So a last hurrah at ArtsRiot feels particularly appropriate.

"We wanted to send things off in high style and do a show in a more intimate, club-like setting, like the old days," writes Chorney. He adds, "The band has never sounded better, and the material really does hold up!" 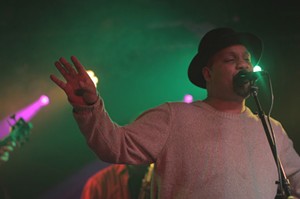 In other news, I'm happy to report that the fundraising efforts for Funkwagon front man Aaron Burroughs, who lost all of his musical equipment in a fire earlier this year, were a success. Burroughs was able to re-outfit himself, and Funkwagon are back in action with a weekly residency at Nectar's every Thursday in May.

Burroughs informs us that special guest bands will join Funkwagon every week, including Leroy Justice (May 8), North Funktree (May 15), Nuf Said (May 22) and Grundlefunk (May 29). He adds that FW will open and close each night, with the guest bands playing in between, like a funk sandwich. In a related story, how is Funk Sandwich not already a funk band name?

Last but not least, congrats to the Waking Windows 4 crew for a spectacular festival last weekend. I was out of town on Saturday and Sunday for a friend's bachelor party, so I only caught the shenanigans on Thursday and Friday. But what shenanigans they were! I was once again enamored with the electric vibe all over Winooski and, of course, the music. From rock bands at the Monkey House to hip-hop DJs at the Mule Bar to electro-pop at oak45 — the last a really nifty little venue, BTW — I came away impressed with virtually everything I saw. And I'm told by reliable listeners that Saturday and Sunday were equally excellent. The moral of the story: We're pretty lucky.

The original print version of this article was headlined "Imperfect Trainwreck"