There's no getting around it: Quarantine sucks. Sure, sure, the extended downtime can be kind of nice, provided you're healthy; still have a reliable income; are well stocked on books, TP and bourbon (and, food, I suppose); and don't have small children or anxious pets pinballing around your house from dusk 'til dawn. In other words: The downtime is nice provided it is actually downtime, which it isn't for many of us. And even then, relaxing is always better when it's not the only option, right? And also when there isn't a malignant cloud of existential dread hovering over everything.

But what about for people who don't just wistfully long for the days of being able to leave the house to grab a beer or catch a movie or run screaming from their kids or any of a million other small things we no longer take for granted? What about for those whose life forces, whose fundamental reasons for being, whose very identities are inextricably tied to being able to go to a place and do a thing?

This is all a long-winded way of asking a very serious quaran-question: How the fuck is Tim Lewis doing?

For the unfamiliar, Lewis is, inarguably, the most knowledgeable and impassioned fan of Vermont music ... well, ever, probably. You might not know him personally. But if you've been to a local rock show in the greater Burlington area at any point in the last, oh, 30-plus years or so, you know him. He's the guy with the long gray hair standing directly in front of the stage, often clad in a snazzy sport coat, rocking the eff out.

Lewis is a fixture in the local music scene, maybe even more so than any individual acts. Not only does he get out to see more live music than anyone else, he dutifully chronicles his rock-and-roll adventures on Facebook. As I put it in a 2013 profile, "His Facebook page is like the Yelp of local music." Local bands come and go. But Tim Lewis is eternal.

"I'm starving a little bit, musically," he told me over the phone last week in his typically gentle, understated manner. It was almost a month to the day since the last show he'd seen: surf-rockers the High Breaks and their Ozzy-lovin' counterparts, Surf Sabbath, at Foam Brewers in Burlington. He even recalls the last song he heard: the latter band's cover of Black Sabbath's "Paranoid."

"Yeah, I remember that pretty clearly," said Lewis with a chuckle.

Amazingly, Lewis said he hasn't tuned in to many livestream concerts since entering self-isolation. He works in the call center for Gardener's Supply and has set up an office in his bedroom so he can work remotely. Business has been booming for local gardening centers as Vermonters get their homesteading on for the apocalypse — that is, when not tending to their sourdough starters. After spending 10 hours taking orders for basil starts and potting soil, "I just can't stare at a computer anymore," Lewis said.

He's as surprised as you are that he hasn't caught more online concerts.

"I realized that one of the things I like the most about live music is just being out in that space and listening to the sound reverberate around the room," he said. "It's kind of not the same."

One thing that is the same: Lewis is continuing to produce his weekly local music radio show, "The Sounds of Burlington," which airs Thursdays at 9 p.m. on WBKM.org. He's had no shortage of new material to spin, including recent releases from Eastern Mountain Time, Hana Zara and Rough Francis.

Lewis also recently released Live From Robot Dog With Tim Lewis Vol. 3, the latest installment of his series of live studio recordings at Ryan Cohen's Robot Dog Studio. The 52-track compilation features tunes by the likes of Matthew Mercury, the Red Newts, Cricket Blue, Jessica Rabbit Syndrome, Sad Turtle and many, many others.

Lewis doesn't know when he and Cohen will be able to start recording bands again for that series. But he does know which show he's most excited to see whenever the world returns to some semblance of normal.

"Whatever the first show is," he said.

In case you missed it, on Monday organizers officially announced that the 2020 Burlington Discover Jazz Festival would not be happening as scheduled in June, because of the pandemic. While that news came as a shock to precisely no one, the indefinite postponement — BDJF brass didn't use the C-word, cancellation — is the first in the festival's 37-year history. But don't dejectedly stuff those jazz hands in your pockets just yet. There's a decent possibility we'll still get some version of the festival before this godforsaken year is out.

The original idea of the jazz fest, said BDJF managing director Chelsea Lafayette in a phone call after the news broke Monday, was to celebrate jazz and "bring people downtown and support local musicians." She added that, for a lot of folks, experiencing jazz fest means going downtown and taking in free shows on the Church Street Marketplace, not necessarily shelling out for major headliners like Pharoah Sanders or Fantastic Negrito, who were both scheduled to appear this June.

A festival on that smaller, lower-cost — or perhaps no-cost — scale "feels like a reasonable version of the jazz festival to happen," Lafayette said.

She couldn't speculate on when such an event might be in the cards, since there's no way of knowing when it will be safe for people to congregate again. But she said that as soon as organizers can, they will focus on putting something together, ideally prominently featuring stages along Church Street.

"It's really going to be a wait and see," she said. "What are people's appetites for this kind of thing when it comes to safety?"

The economy will be another factor, she said.

"A lot of people are in dire straits right now," Lafayette observed. "So, being set up to do a large amount of free events feels like something that's gonna be needed more than ever." 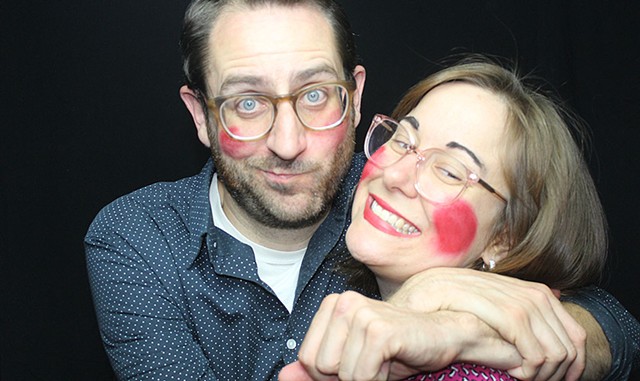 I don't know about you, but I could use a good laugh. Fortunately, our good pals at the Vermont Comedy Club have us covered, coronavirus be damned.

For the past month, VCC co-owners Natalie Miller and Nathan Hartswick have built a solid schedule of weekly livestream shows, from improv with the Unmentionables on Thursdays to standup open mics on Wednesdays to a double dose of kid-friendly fare on Wednesday and Saturday afternoons. But the real gem is the weekly variety show "Talk to Us! (Please)" every Friday at 8 p.m. on Instagram at @vtcomedy.

The format is loosely modeled after a late-night talk show, with Miller and Hartswick doing topical monologue jokes at the top — complete with canned laughter — and the Unmentionables' Brian DeLabruere doing a short improvised bit. Guests typically include a big-name comedian, such as Hari Kondabolu, Todd Glass and Nikki Glaser, who have all appeared in recent weeks. The couple also welcomes a "local hero," such as a nurse, a grocery worker or someone else on the front lines against COVID-19. And there are musical guests, too — Madaila's Mark Daly and Myra Flynn turned up recently.

Here's a peek at what's been on my bunker hi-fi lately.