Soundbites: How to Not Plan Your Art Hop

When you're readying yourself for a large cultural event like a music festival or block party, the conventional wisdom is to formulate a plan, right? You map out the area to get the venues straight, take note of the food options, maybe look at the schedule and make your own list of must-sees — you know, all the actions of a properly prepared culture-seeking hepcat.

There is nothing wrong with this approach. In fact, it is a smart and surefire way to get the most out of experiences in which a little forethought can be the difference between seeing something spectacular and getting lost looking for a falafel cart. I missed the White Stripes at Bonnaroo one year because I was sure I had seen a dim sum cart. I was wrong: It was a Wookiee selling grilled cheese.

But I'll go to my grave knowing I did the right thing. We must be brave in our attempts to love and to eat scallion pancakes.

And, in that spirit, I'm now going to urge you not to make a plan for this weekend's South End Art Hop. I'm serious: Grab a program and don't open it until you're right on Pine Street in the thick of it. Trust me.

The annual event, which celebrates its 30th anniversary this year, is a mammoth hybrid of a block party and a festival. It sprawls over three days — Friday to Sunday, September 9 to 11 — and more than 90 venues throughout Burlington's South End. Those venues house the studios of a massive array of Vermont artists working in all kinds of disciplines.

Since Art Hop's founding in 1992, it's become a bedrock event of the Vermont arts scene, attracting more than 35,000 visitors each year to experience — and sometimes buy — the best art the area has to offer. Throw in all the restaurants in the South End, the incredible food trucks, and the smorgasbord of local musicians playing in galleries, loading docks and other venues, and thy cup beginneth to run over.

I can see you now, dear reader, shaking your head and saying, "Dude, everything you just described makes me think I need a plan. Are you high?"

OK, first off, that's rude, especially since you're the one talking to yourself while you read the newspaper. But that's not the point! My point is — and I can't stress this enough — that the best way to experience Art Hop is to give in to the chaos of it. Throw yourself into the deep end and just wander around.

I've rarely missed the Hop in the 21 years I've lived in Burlington. I've had my best experiences there by just pointing myself toward the South End and letting the event surprise me. Pop into a random studio and see some amazing glassworks. Seek out strangely lit spaces. If you hear something cool, investigate! You might turn a corner and find a building you somehow never noticed before, and, holy shit, there's a punk band just raging in front of a wall covered in metal sculptures.

If winging it isn't your style, that's OK, too. There is method to the Hop's madness, and consulting the Seven Days Guide to Art Hop 2022 or popping over to seaba.com will help anyone formulate a plan.

If you're looking to pin down your music-listening agenda, that's a little trickier. The music portion of Art Hop began as the undercard to the main event, with bands setting up outside studios in parking lots. Over the years, it's become progressively more organized, with more and more shows in proper-ish venues along Pine Street.

Out-of-the-way and borderline-hidden shows still happen, though. Again, I urge you to wander, which is the best way to find those events. 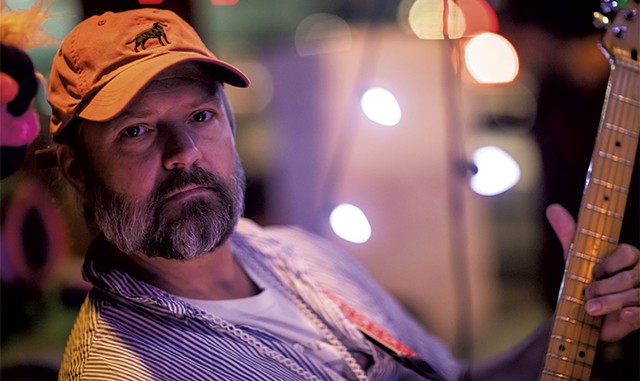 Plenty of music is going on at the established spaces, as well. Citizen Cider has two days of live music lined up on its loading dock. On Friday, starting at 1 p.m., Americana act Danny & the Parts and yacht rockers Pontoon take the stage. On Saturday, it's soul-pop group Brit Kane and Co., along with oddball indie rockers Happy Spangler. Switchback Brewing hosts music all three days of the Hop. On Friday, see reggae act Satta Sound at 6 p.m., accompanied by an outdoor light display from Satellite Arts Productions. The Devon McGarry Band holds it down on Saturday afternoon at 3 p.m. And, in one of the few Art Hop shows scheduled for Sunday, the Greg Rothwell Swungtet will bring the jazz for an afternoon set.

I mean, there's a show on TV about pimple popping, we had a cute lil' American insurrection last year, and the Choco Taco has been discontinued, so I'm pretty sure we're already living in a dystopia, my homies. But that doesn't mean I won't go listen to some synth and watch the trippy visuals provided by liquid light manipulators Heavy Light. 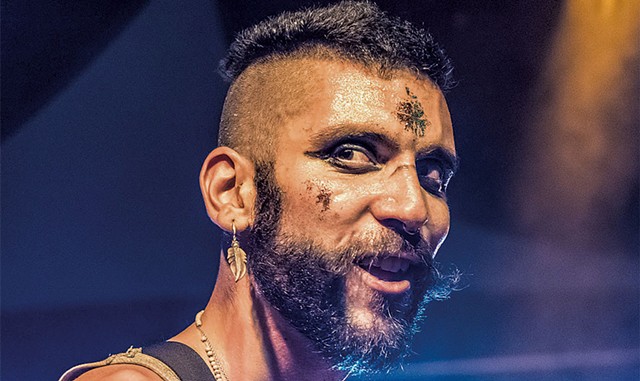 Those are all pretty killer shows. Judging by past experience, however, you're likely to find something even cooler if you don't look for it. Enjoy the Hop, my friends.

Festivals collide! In a move that makes me wonder why this wasn't already a thing, the Above the Radar festival has linked up with Art Hop to make the South End the coolest place on the planet for three days. The annual celebration and showcase of all things graffiti, formerly held on the Burlington waterfront, has moved over to 180 Flynn Avenue, where host Burlington Beer provides food and beer.

Aerosol art technicians Anthill Collective once again organized the event, which runs Friday to Sunday. According to cofounder Scottie Raymond, Anthill has booked more than 30 artists to create murals, as well as a collection of local hip-hop DJs and producers.

On Sunday, September 11, the Double E Performance Center in Essex plays host to a benefit for the Waterbury Ambulance Service. The donation-funded organization is near and dear to the heart of venue cofounder Kevin Statesir.

"They were instrumental in getting [COVID-19] tests and vaccines to the public, especially in Washington and some of Chittenden county," Statesir wrote of the ambulance service in an email to Seven Days. "It was the easiest non-state run PCR in town!"

The Waterbury resident wants to help pay back the first responders with a fundraiser featuring local rockers the Grift, food trucks, games for kids, plenty of beer and a silent auction. Statesir and Mark Podgwaite, executive director of Waterbury Ambulance, hope to raise enough capital to build a new facility that they say is desperately needed.

"We have been working hard to raise $3 million towards our new facility," Podgwaite wrote in an email. "We are 77 percent of the way to our goal with just over $700,000 left to raise. I am blown away by the kindness of our community."

For more information on the event, visit waterburyambulance.org.