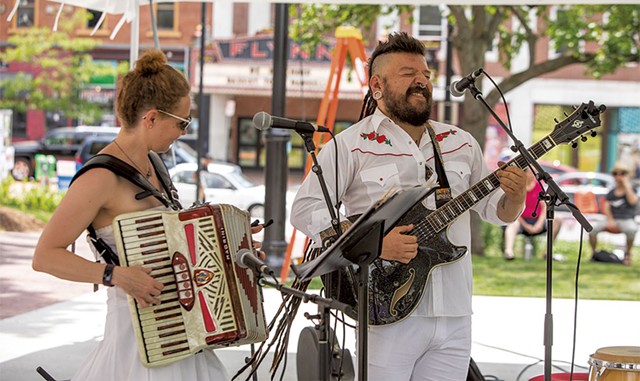 There used to be an unofficial Soundbites tradition in which the music editors rarely, if ever, discussed the behemoth that is the Burlington Discover Jazz Festival in the column those weeks. The thought was, Hey, the fest is all over the rest of the paper. Let's give those not as psyched by the jazz takeover of the city a little respite.

In general, I support this idea. I was definitely one of the Burlington musicians who used to get an outsize chip on my shoulder during the 10 days of jazz domination every summer. I'd be mumbling about people wearing socks with their sandals and the number of balding dudes with ponytails clogging up all the restaurants in town.

As I've written before in this very column, eventually I learned to stop worrying and love the jazz fest. Yes, I got older, and I'm sure that had something to do with it — may we all outgrow the rigidity of the musical tastes of our youth. But the fact of the matter is: The BDJF has gotten progressively weirder and bolder in its bookings.

Exhibit A is the Flynn's hiring of Michael Mwenso and his Electric Root partner, Jono Gasparro, to guest curate this year's lineup. The result, as you can read about in this week's issue — here  — is a wonderfully diverse, musically eclectic and vibrant collection of performers who are here to shake asses across Chittenden County, as well as drop a heap of lore and history about the origins of jazz and other Black roots music.

One thing I didn't want to slip between the cracks — and the main reason I'm breaking with tradition to write a jazz fest-themed Soundbites — is that, once again, our local jazz scene is coming through big time in this year's iteration of the fest.

Last year's BDJF was in many ways a referendum on the strength of the local jazz scene: The stripped-down event was leaner than in previous years and relied more heavily on local musicians than on the big names we usually see. For those who missed out: Vermont's jazz scene delivered a gloriously cathartic party that the city needed like never before.

So, with the return of major headliners such as George Clinton and Joshua Redman, I want to use this space to remind everyone where our talented local jazz musicians will be popping up throughout the fest. There are a metric fuck-ton of them, though, so be sure to check the full list of performers over at flynnvt.org, as well as in the Seven Days club dates.

The 126, always a hotbed of local jazz, features great music throughout the festival. The College Street club hosts some of the best local jazz, from Dusk Quartet kicking things off on Friday, June 3, all the way to the closing night on Saturday, June 11, by the Dan Ryan Express. In between, catch sets from the likes of Alex Stewart, Tom Pearo, Connor Young, Michael-Louis Smith and many others.

It's hard to beat the authenticity of the jazz experience at the 126. It's where you'll find the classic dark nightclub vibe, complete with fancy cocktails and smooth jazz.

It would be weird if Radio Bean didn't get in on the action, right? No club in the city hosts as much music as the venue on North Winooski Avenue, and the Bean will indeed feature plenty of jazz and jazz-adjacent stuff during the festival, as will its next-door sister club, the Light Club Lamp Shop. In addition to marquee BDJF shows such as New Jersey rock-jazz fusion pianist ELEW on Wednesday, June 8, and Mwenso and the Shakes on Friday, June 10, Radio Bean has an embarrassment of local music riches to share. Whether it's Latin dance band Mal Maïz, Michael-Louis Smith and Brooklyn Circle, or singer-songwriter Myra Flynn, some of the area's best and brightest are taking the stage.

(For those needing a jazz break, have no fear. Radio Bean still has indie rock shows with the Dead Shakers, Guy Ferrari and others booked during the fest, as well as the ever-popular Honky Tonk Tuesday.)

Hotel Vermont is always a good destination for jazz in Burlington. The hotel hosts an assortment of jazz-themed nights during the festival's 10 days, starting with Ray Vega's Latin Jazz Band on Friday, June 3, followed by the Alex Stewart Quartet on Saturday, June 4. The University of Vermont Jazz Collective, composed of members of the school's jazz faculty, perform a night of modern jazz on Wednesday, June 8, rounding out a rather academic (in a good way) collection of performers.

Of course, Red Square and Nectar's both feature plenty of local talent as well as touring artists. Then there are all the bands playing on the Church Street Marketplace, in City Hall Park, and in Schmanska, Leddy and Starr Farm parks. We're about to be utterly surrounded by music, people.

It reminds me of something Burlington City Arts executive director Doreen Kraft told me last week when I spoke to her about jazz fest. Kraft was there at the beginning and had a hand in putting together the first BDJF, 40 years ago.

"The local jazz musicians came to us and basically asked us to help them," Kraft told me. "They were worried their music was going to be forgotten, that jazz was slipping away as an art from. They wanted to show everyone how great the jazz up here is."

Well, 39 festivals later, I think it's safe to say that mission has been accomplished. From Mwenso to Jazz Generation chief operating officer Rob Duguay to former Lou Reed saxophonist and recent Vermont newcomer Marty Fogel, I've heard musician after musician marvel at how robust the jazz scene is in Burlington. You have to believe that one of the biggest reasons for that is the existence of the Burlington Discover Jazz Festival.

Composer and artist Benjamin Mayock has partnered with fellow Vermont ambient composer John P. Hastings to create a new album called Songs Crystals Drone. The two musicians have made a showcase for the steel-string acoustic guitar in all its forms, featuring delicate fingerpicking and open-tuned drones played with electric toothbrushes on the strings.

The album is one part of a multimedia project Mayock and Hastings are working on called "The Former World," which is based on writer John McPhee's geologic history Annals of the Former World.

"It's somewhere between Ry Cooder and La Monte Young," Mayock wrote in an email about the new project. "It's all held together by a just-intonation tuning of the guitars and, additionally, the great mastering work by Stephan MathiEu."

The album drops on Friday, June 3, and is being released by Community of Sound, the Burlington music co-op and label. Catch the release event for the album and the accompanying photo book at Community of Sound on Thursday, June 2.

A few festival announcements hit right as we went to press last week, which was a bummer, as I had just finished previewing summer fests! So, let's update the list.

The Nightshade Festival returns this year on August 27 for a day of some of Vermont's best indie music. Hosted at the Red Barn Gardens in Williston, the food and music extravaganza boasts a lineup full of local talent, including Brattleboro's Thus Love, indie rockers Lily Seabird, Roost.world, DJ Taka, Ivamae, Willverine and more. Nightshade Kitchen will provide all sorts of fresh, farm-grown food, Steven Yardley returns with Sonic Steve's Jammbulance, and there will be plenty of local beer, wine and cider.