Soundbites: Her, Too; Security Deposit 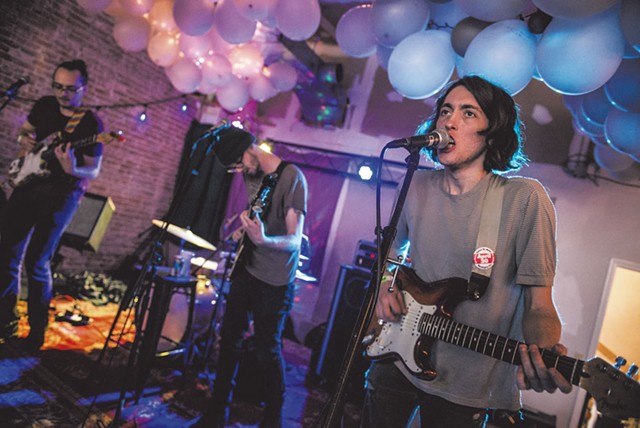 Following the recent, extensive media coverage of the allegations of sexual assault, harassment and discrimination leveled at film producer and all-around garbage person Harvey Weinstein — as well as former Real Estate guitarist Matt Mondanile, experimental producer the Gaslamp Killer and singer-songwriter Alex Calder — my social media feeds have been full of women posting the phrase "#MeToo." It indicates that they have also personally experienced sexual harassment, discrimination and/or assault. I imagine your feeds have been similarly populated.

To say I'm shocked at the hashtag's recurrence in the last few days would be a lie. Don't get me wrong: I'm horrified but not shocked. I'd love to say that we, the "enlightened" community in Ver-topia are removed from Weinstein-esque behavior, but we aren't. I repeat: We are not removed from these problems. This shit is happening here. And it will continue to happen unless we take action. The fact that I'm writing these words in a music column should give you an idea to which community I'm referring.

I have no answers. I have no plan. All I have is a message to anyone who, like myself, is privileged enough not to have been put in danger the way that Weinstein's alleged victims and others have: Don't look away. Don't ignore. Don't make excuses and justifications. If you can do something, do it. If you can say something, say it. Because, based on reading numerous accounts from survivors — from the Weinstein case and too many others to count — I've come to understand that victims often can't do or say anything, for a plethora of reasons. But you, the privileged, probably have more power than you realize. So you should use it.

Burlington's nightlife scene is constantly in flux. Bands call it quits; new ones pop up; clubs shut down, rebrand and reopen; retired projects get rejuvenated; people move away; etc. As I mentioned last month when previewing comedian Annie Russell's exit from the area, no fewer than five people I've profiled in the last year have moved on from the 802 to pursue their dreams in fresh locales. (Seven Days profiled Russell in late 2016, and she was included in a summer cover story about local female comedians.)

And, sure, we've had some exciting developments and additions to the local musicsphere recently, such as the openings of the revamped Half Lounge and Winooski vinyl emporium Autumn Records. New bands and artists are establishing themselves on the reg, such as the astounding indie-rock quartet Julia Caesar and a brand-new R&B supergroup called JUPTR. (More on the latter in next week's Soundbites.) But, this year, I feel like the scales seem unfairly tipped toward dissolution and exodus.

The latest Burlington-based outfit to bid adieu is Apartment 3. The garage punks dropped one of the finest local rock records of 2017 on the boutique Section Sign Records, which also closed up shop this year. The band plays its last show on Saturday, October 28, at the Monkey House in Winooski. Local indie rockers Clever Girls and "lazegaze" quartet Sleeping In add support. (Speaking of Sleeping In, check out our review of their debut LP, let you in.)

"We moved out of Burlington about a year ago, but we didn't want to let go of the band," says Tierney via Google Hangouts.

To be clear, the band as an entity didn't relocate. The fellas themselves did, settling in various cities around the Northeast, but there was never a new home base for Apartment 3. (On their Facebook page, their "location" is, and has always been, Burlington.)

"We've been keeping [the band] on the back burner, trying to make it work, all from different places," Tierney continues. He reckons they've played about once a month or so since leaving Vermont, as opposed to the near-weekly gigging the boys did just a couple of years ago.

Now, I'm not trying to be cynical here, but I think we all know how most long-distance relationships play out. Once the optimism fades and distractions enter the picture, LDRs usually are not viable. When the parties involved arrive at that conclusion, the decision to throw in the towel is usually the right one.

"Looking back on it all, there were three years where the only thing that mattered was Apartment 3," Tierney says. "Everything that we did was for the band. But, eventually, life just happens."

The final show will likely be emotional — "I'm probably going to cry," predicts Tierney. And since it's happening during Halloweekend, it'll probably be a wild, memorable evening.

On Saturday, October 21, the Joe Davidian Trio headlines the Spruce Peak Performing Arts Center in Stowe. The Vermont-born pianist and bandleader hasn't brought his trio to the Green Mountains since 2013, when he and his bandmates, drummer Austin McMahon and bassist Dr. Jamie Ousley, performed at Bethany Church in Montpelier.

The newly released album is a mix of standards and originals, the balance of which, according to Davidian, speaks to the evolution of his trio's live show.

"When we released Live at the Jazz Cave, Volume One, the discussion within the trio was to not force the group to play originals, which may not lend themselves as naturally to our approach of leaving space, group interaction and organically developed arrangements and dynamics," Davidian writes in an email.

"The new album shows the nuance, finesse and the most honesty in terms of our repertoire decisions," he continues.

If you're wondering how those decisions might manifest in Saturday's show, it's pretty simple.

"My mom told me to play songs people know," he writes. "So I'll probably take her advice."