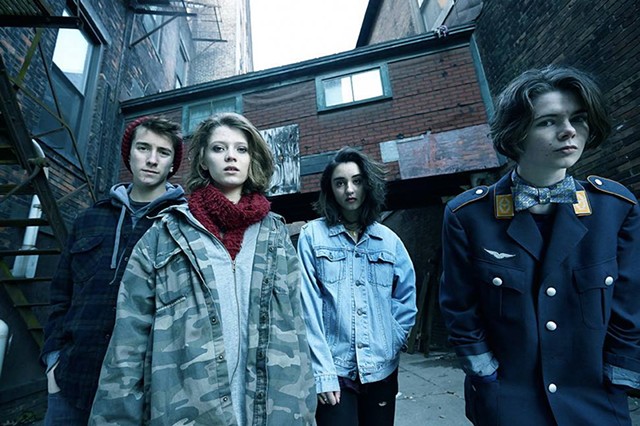 I apologize for starting out this week's column with a stone-cold bummer of an announcement, but news is news: Brattleboro-based indie rockers the Snaz are calling it quits. The band announced its demise last week on its Facebook page. This might be a bit of a shock to anyone who's been following the band and its skyward trajectory over the last couple of years. I truly thought the Snaz were "going places," as did other Seven Days scribes who've reviewed their recent releases: 2015's Running Away From Home, and 2017's Sensitive Man. Though I won't speculate about "what could've been," the Snaz seemed destined to launch their eloquent, tough-as-nails/sweet-as-candy-bars brand of rock far beyond the regional scene.

In an email to Seven Days, front woman Dharma Ramirez explains the breakup: "It's difficult working with four other people, all of whom are going through adolescence, different schools and separate dreams. The Snaz held so many dreams for me, and I put my heart and soul into writing these songs. However, in the end, my relationship with music and my bandmates needed to be saved. The whole business of the Snaz had become one of stress and disagreement. It was time to take our energies elsewhere."

Bassist Nina Cates echoes the sentiment. She writes, "In the end, it felt more like work and stress than fun."

One of the main narratives surrounding the Snaz was the fact that its members were so young. With that in mind, may we all take a cue from the level of maturity and self-awareness these 18-year-olds have displayed the next time we're faced with a conflict.

You have (at least) two more chances to catch the Snaz before they fade away. They play on Friday, May 5, at Scout & Co. in Winooski as part of Waking Windows, and again on Saturday, June 10, at the Scout Film Festival in Stowe.

On the plus side, Ramirez's other band, OSABA, is still active. The hard-edged, grungy duo recently released an EP, so be on the lookout for a review in Seven Days' music section sometime in the next few weeks.

Given that Vermont's music scene is a veritable embarrassment of riches, it only makes sense that as one band announces its demise, another one (or two!) sprouts up to take its place. JB Ledoux and Gahlord Dewald of the improvisational avant-jazz outfit the le duo recently teamed up with experimental visionary Greg Davis for a new project called Threes. Ledoux tells us via email that the newly formed trio was born "out of the need to create significantly challenging art in the wake of a perceived global shift to the alt-right." He notes that the band seeks to provoke self-awareness in its listeners. Threes make their debut on Monday, May 1, at the Light Club Lamp Shop in Burlington. Check out the Bandcamp page to hear the trio's first release, Volume 0.

And speaking of debuts, producer and former Pretty & Nice guitarist Jeremy Mendicino unveils his new project, the Gifts, on Friday, May 5, at Waking Windows. He dropped the ominous, glitchy, fuzz-core singles "Ocable" and "Maustv" on Bandcamp in February.

This Saturday, April 22, scientists and allies of the scientific community plan to rally together for the March for Science. According to its official website, the march is "a gathering of people standing together to acknowledge and voice the critical role that science plays in each of our lives." The main event happens in Washington, D.C., but more than 500 satellite marches are planned on every continent — except Antarctica, which seems strange, because I was under the impression that Antarctica is pretty much populated with nothing but scientists. Maybe a march on the South Pole would be like preaching to the choir.

And who better to provide musical entertainment for Burlington's march than Waitsfield's cybernetic surf-punk trio the Tsunamibots. The band, composed of three humanoid subjects controlled remotely by their robot overlords, wouldn't exist without major scientific and technological advancements, such as artificial intelligence. (Play along with their shtick, people.)

The march begins at 5 p.m., starting at the plaza in front of the Royall Tyler Theatre on the University of Vermont's main campus. Marchers proceed down College Street toward Waterfront Park. There, the Tsunamibots will begin their robotic assault on all humans who dare withstand their mighty riffs and licks.

Aside from the wave-slaying automatons, guest speakers include former Vermont Health Commissioner Harry Chen, and CEO of GameTheory Marguerite Dibble.

Have I mentioned how much I love karaoke? I effing love it, and I take it quite seriously. I know it's not a big deal for most people. It's just a way to blow off steam and make an ass of yourself after kicking back a few. But for those of us who use it as an excuse to live out our fizzled dreams of onstage glory, it's nice to know that some other people take it seriously, too.

For instance, there's Jasmine White of GigginVT Productions and the Heart/Led ZeppElin cover band, Heartless. She's organizing a yuuuge karaoke contest at City Limits Night Club in Vergennes on Friday, April 21. The contest is modeled after NBC's "The Voice." Judges Cassandra Demarais, Christa Lang and Kevin McEnerney won't have eyes on contestants until after they've heard them sing. So, you know, don't feel the need to dress up all fancy er nothin'. It's all about the pipes.

Aside from momentary fame and glory, the winner also receives a fistful of greenbacks. Cash register sound!

Three of the go-to names in Burlington house and techno happenings converge for a special event this Friday, April 21, at Club Metronome. Sunday Night Mass, Nexus Artist Management and 2K Deep present Belgian techno superstar Kill Frenzy. The Berlin, Germany-based DJ/producer is currently on Los Angeles label Dirtybird Records' roster. Local support includes DJs Haitian, Justin R.E.M. and Jack Bandit. This is likely to be one of the larger EDM offerings of springtime, so, if you're a slave to the throbbing strains of Kill Frenzy's brand of ghetto-house, you don't want to sleep on this opportunity.

Kidd Video, "Where Did Our Love Go?"

The Snaz, "Strung Out on Candy Bars"