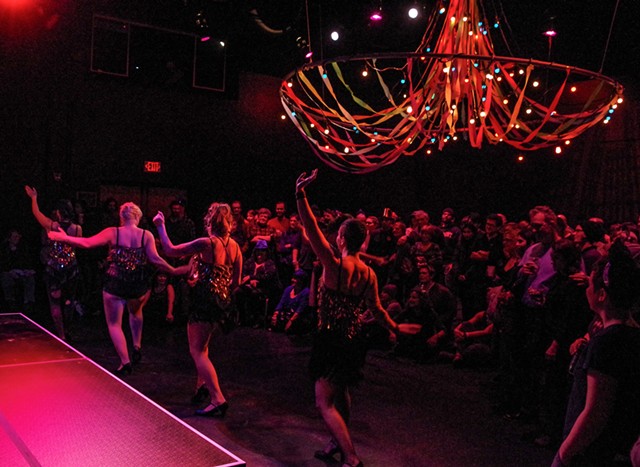 Did you catch last week's music scene survey? Once in a while, we like to poll prominent members of the local music community on various topics. Last week's piece focused on DJs and whether or not they take requests. Answers were varied and detailed. If you didn't see it, try to scrounge up a copy of last week's paper. Or, more realistically, check it out on our website. It's worth your time.

However, it dawned on me that I didn't include any of my own personal opinions about requests. Such a feature doesn't really allow for them, anyway. Luckily I have this handy-dandy column in which to opine.

When I'm deejaying, nothing drives me crazier than requests from the audience. Actually, it's not so much the requests that bug me. It's the righteous indignation that follows my canned response of "no." I don't want to go into too much detail here, because this isn't about promoting myself, but my approach to deejaying is very involved and more like performance art than a typical DJ set. It drives me bananas when people can't see that something intentional is happening during my sets. Anyway, I digress.

Unequivocally, club DJs should not be trifled with. Let them do their thing. If you don't like the music, you can leave. Or you can be an adult and roll with it.

That's not to say requests are never appropriate. When and where can you make a request? Namely, private events like weddings, anniversary parties, and bar and bat mitvahs. School dances are another. Also, if you see a clipboard or some other source of input, obviously requests are a go. I've also heard that some DJs in bigger cities are using apps through which clubgoers can request songs and also add tips.

OK, that's my two cents. On with this week's music news.

In a rare mashup of the local comedy and music scenes, Vermont Comedy Club hosts a special event called Comedy in Concert on Friday, July 12. The show pairs musicians with the club's house long-form improv team, the Unmentionables. After a brief performance, the improvisers create scenes based on their interpretations of the music. Hilarity ensues, natch.

This week's artists are ambient folksters Zack DuPont and Matt Deluca. The pair is DuPont's regular gig at the moment, as his two bands with his brother Sam DuPont, the somber folk duo the DuPont Brothers and its more rockin' counterpart Soundbrother, are currently somewhat dormant.

"It's a huge sound," Zack says of his project with Deluca, describing it during a recent phone call as "meditative but also expansive and improvisational."

You can get a taste of the pair's sound on Zack's recently released two-track EP, Everything Is Earth, available to stream or purchase on Bandcamp.

You Light Up My Life

In 2017, Burlington witnessed the last ever First Night, the Queen City's long-running, eclectic New Year's Eve celebration. As mild panic ensued in the early part of 2018 over what would take its place, the folks at Burlington City Arts and Signal Kitchen stepped up with Highlight. The new, sprawling event featured gobs of live music and other artsy happenings and was generally considered a rousing success.

A huge part of Highlight is community involvement, which starts with the Bright Idea Project. Simply put, anyone can submit a concept for something they'd like to see produced under the Highlight banner. It can be a music event, an art installation, a performance art piece — anything "that will connect our community across the city on December 31," BCA event and production manager Zach Williamson said in a press release.

According to the request for proposal, available for download at the website highlight.community, you could potentially be awarded up to $10,000 to produce your event. A number of stipulations follow: Events must be accessible and open to the public, for example, and be produced by Vermont residents. Applications can be submitted until Monday, August 12, so you have some time. Get to brainstorming, y'all!

It Could Happen to You

Calling all Vermont-based bands and artists! The time has come for Seven Days' annual Grand Point North Local Band Contest! (I really should've mentioned this last week, so apologies for not properly blasting it out until now.)

In case you have no idea what I'm talking about, Grand Point North is one of the best music festivals in Vermont. Helmed by the incomparable Grace Potter and Higher Ground Presents, the two-day bash takes place on Saturday and Sunday, September 14 and 15, at Burlington's Waterfront Park. And every year, one lucky act will win the opportunity to join the bill and open the festival.

To enter the contest, simply go to our website, look for the band contest banner ad at the top of our home page and fill out the form. Nominations are open until 11:59 p.m. on Sunday, July 14. Voting commences on Monday, July 15.

You can only vote once, so make it count! I repeat, you can only vote once. And beware: A team of ex-MI6, CIA and NSA analysts has been contracted to examine our votes. (OK, no one from those shadowy orgs is really on the team, but we do have cybersecurity that prevents fraud). We think cheating is lame and have had to disqualify people in the past for not playing fair. So don't cheat!

Any diehard Phish phans who haven't seen Steven Cantor's 2019 documentary Between Me and My Mind are in luck. The film, which screens twice at the Double E Lounge at the Essex Experience on Wednesday, July 17, focuses on the life and creative process of the jam band's front person, Trey Anastasio.

The New York Post's Michael Lello refers to the film, which made its premiere at this year's Tribeca Film Festival, as a "fascinating deep dive into the methods of Anastasio" and his "unrelenting, borderline obsessive creative process." Anyone who's ever wanted to get into Anastasio's head should check it out.

Moneybrother, "We Die Only Once (And for Such a Long Time)"