For the past several years, I've used the Thanksgiving week column to highlight some of the things I'm personally thankful for in the local music scene, or that we should collectively take a moment to appreciate. Originally, that conceit was born of necessity. Music-wise, the upcoming weekend is traditionally one of the slowest of the year. So stepping back for a wide-angle view is a way to eat up some newspaper real estate in a lean week.

Over the years, though, the Thanksgiving column has become more than an exercise in fluffing word counts. It's now one of my favorite annual pieces to write. Instead of not having enough stuff to write about, I've since encountered the opposite issue: 1,200 words are not nearly enough to praise all of the good that happens in Vermont's music scene.

For many this year, Thanksgiving comes against a backdrop of uncertainty, if not outright fear. I wrote last week about how finding solace in the aftermath of the election was a tall order. The same holds true for feeling grateful when so much seems so wrong. But, as with last week, I think it's vitally important to try. If nothing else, it will serve as a reminder of what's at stake in the years ahead. With that in mind...

I'm thankful to be part of a community that cares. Last week, I told you about Mycelium MC, a local rapper who helped to organize a Standing Rock benefit in conjunction with Central Vermont Stands With Standing Rock. I'm happy to report that the show took in $4,200 for the cause. It was such a success that Mycelium is planning a similar event in Burlington, possibly as soon as mid-December. We'll have more details on that show as they become available.

(It is not a coincidence that we're leading the Thanksgiving column with an item about supporting disenfranchised Native Americans. Remember that time they fed and sheltered a group of weary immigrants who had washed up on their shores looking for a better life? Maybe it's time we finally repay that kindness, eh?)

I'm thankful to be part of two cities, Burlington and Winooski, that are giving strong consideration to officially proclaiming themselves as sanctuary cities. Especially given the promise of the incoming president to pull federal funding from such cities, that's a strong statement of our civic values. It has implications in music, too.

You'll find excellent immigrant and refugee musicians throughout Vermont's music scene. For example, Anwar Diab Agha. A world-renowned composer and master oud player, Agha is a Syrian immigrant and leader of the classical Arabic ensemble Grup Anwar. If you haven't checked out the band's monthly Tuesday gig at Radio Bean in Burlington, I strongly recommend it — the next is December 20. You won't hear music like it anywhere else in town. While you're there, maybe grab a copy of the group's new album, A Syrian Journey: From Damascus to Burlington.

Speaking of Grup Anwar, the band performed last weekend as part of the ongoing New Voices Series at the FlynnSpace in Burlington, which features a cross-section of New American musicians living in Vermont. Curated by Saint Michael's College music professor William Ellis, the series began in October with Ghana-born rapper S.I.N.siZZle, West African refugee all stars A2VT and vocalist Benny Nduwayo, the last a refugee from Tanzania. The series continues in February with musicians from the Vermont Hindu Temple and local didgeridoo players Pitz Quattrone and Robin Hanbridge. The series concludes in April with the local Somali Bantu band Walinja and Tibetan vocalist and dramyin master Migmar Tsering.

I'm thankful that, for the last three decades, Burlington has been home to 242 Main, the oldest all-ages punk club in the country. The club's future is in doubt as the city tries to figure out what the hell to do with "Moran on Main," aka Memorial Auditorium. But it's hard to overstate how critical the basement club has been as a cornerstone of the local music scene. Tune in next week for details on the "last" show at 242.

I use quotations there because I'm also thankful for the efforts of some, most notably led by Big Heavy World founder Jim Lockridge, to engage the city in finding ways to keep 242 Main around. Burlington is a city that prides itself on supporting the arts. They are fundamental to our civic identity. So I'll go ahead and add my voice to the growing chorus of those who hope that city government recognizes what a unique and valuable resource 242 Main has been, and can be, for a segment of young artists who otherwise might be overlooked.

I'm thankful for Mi Yard Reggae Night at Nectar's. True, you might not find me at the weekly Sunday residency all that often — hey, it's a school night. But that's not really the point. For 10 years, the Mi Yard DJs Big Dog and Jahson have created an outlet for fans of irie island music to hear some of the best of the genre and its myriad offshoots. Reggae Night is a staple of the Burlington club scene. Not only that, but Mi Yard have been responsible for bringing some of the best and brightest names in reggae to the Queen City. For example, Jamaican reggae star Kabaka Pyramid, who plays Nectar's on Saturday, November 26, in celebration of Mi Yard's 10th anniversary. (See the spotlight on page 68.) 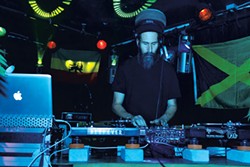 Speaking of anniversaries, I'm thankful for the Vermont Comedy Club, which celebrated its first anniversary earlier this month. In the year since it opened, VCC has brought in some of the hottest up-and-coming standup and improv comedy talent in the country. It's also given an increasingly vibrant local comedy scene a place to call home and to grow. What Natalie Miller and Nathan Hartswick have built at VCC is one of the true feel-good stories of the year. Actually, looking back on it, it might be the only feel-good story of 2016.

I'm thankful I had an opportunity to interview Sharon Jones, which I did in 2010. Like so many of her fans, I was deeply saddened to hear of her untimely passing last week. She was truly one of a kind, and I'm honored to have been able to speak with her about her music.

The reason I could talk with Jones, and countless other musical greats over the years, is because Burlington is blessed with passionate people who bring great music to Vermont. We should all be thankful for them.

It's not every small city that can boast the quantity and quality of musical options that Burlington-area residents almost take for granted. So, to the folks at Higher Ground Presents, Nectar's Presents, Waking Windows Presents, the Burlington Discover Jazz Festival, ArtsRiot, Signal Kitchen, the Monkey House, and other booking entities and clubs and festivals, thank you.

Of course, none of what they do — or what I do — would be possible if not for another key group: you. If you didn't support music in Vermont, all of these efforts would be moot. There wouldn't be incredible concerts to attend, and I wouldn't have anything to write about. And I rather enjoy gainful employment, so thank you for reading. And thank you for supporting local music and the people who make it.