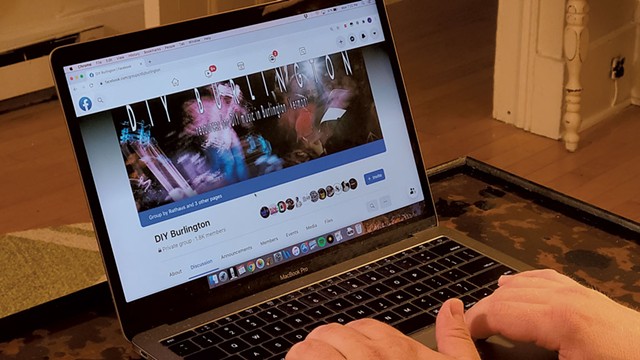 I don't think I've ever mentioned DIY Burlington in this column before, though I could be wrong. Perhaps I've made a passing reference to the Facebook group in some capacity or other. But I've never put a fine point on it, so here goes.

If you're looking to get involved with local music in pretty much any way, DIY Burlington is a great place to start. A message on the group's landing page explains that "DIY Burlington is a coalition made up of DIY spaces, promoters, artists, and showgoers in Burlington, Vermont. This coalition is working to create and continuously revise a set of guidelines ... [that] aim to reduce the risk of partaking in DIY and foster personal growth alongside growth of DIY shows in our community."

The group's standards indicate that assholery (a word Urban Dictionary defines as "actions or behavior consistent with being an asshole") will not be tolerated, either in the group or at local shows. In other words, if you want to be part of the IRL and digital DIY communities, play nice.

Users commonly go to the group for help hosting and setting up shows in basements, backyards and other non-venue spaces. People ask questions they can't answer on their own. For instance, say you can't get a particular plug-in to play nice with Logic Pro, or your favorite guitar keeps dropping out of tune. The denizens of DIY Burlington probably have some solutions for you.

While perusing DIY Burlington this week, I came across a few posts I'll share in this space, just to give you a sense of what to expect. Also, I found some stuff that was too good to scroll by without mentioning here.

For instance, a track called "Adventura" by a group with the best band name I've seen all year, A Johnny Called Quest, made its way into the feed this week. The song is pure mood: A slinky sax line hovers over brooding bass and shuffling beats in a tune full of foreboding. It follows a single released in July called "Transylvania Romance," which is more spooky Halloween vibe than fun-in-the-sun summer jam. It's vampire-rock at its most depraved. I have no idea who is in this band, because the members don pseudonyms in the info section on the Bandcamp page for "Transylvania Romance." Hey, A Johnny Called Quest, let me know when you put out a record, because I want to hear it!

People engage with DIY Burlington to spread awareness and share resources. One recent posting links to an episode of the Better Band Bureau podcast called "Do These Things Every Day | Forming Healthy Habits to Grow Your Music Career." Among the recommended daily activities are practicing your instrument, learning from artists that inspire you, posting content, working on the business of your music, staying in tune with music news and avoiding burnout.

DIY Burlington members can also use the group to find gigs. Reps from local bars and restaurants, talent bookers, and event planners are known to look there to stock their show calendars and find last-minute fill-ins and additions. And lonely musicians often find complementary players to join for making new music. If you're new in town, this is a good place to make connections, find rehearsal space and see what opportunities are available for live gigs in a pandemic economy.

One of the most intriguing posts I've seen in the group came in June from Macaulay Lerman of dream-folk outfit A Box of Stars.

"I recently moved into a new apartment ... and am experiencing pretty severe noise issues with my amp, guitar and recording setup. I get a loud buzzing and rhythmic ticking noise that increases/decreases when I shift my guitar position," Lerman wrote, noting that the issue did not present itself when he played at a friend's house down the street.

Posters chimed in with helpful suggestions. Could a grounding wire have been disturbed in Lerman's recent move? What if he turned off the lights in the room, especially any with a dimmer switch? Unplugged other appliances?

Personally, I think Lerman's guitar and amp are haunted. Maybe the ghost of an angry rocker who once occupied the apartment is trying to jam along, but it's out of phase with this dimension. (Lerman later confirmed by email that he never quite solved the issue.)

Hey, speaking of A Box of Stars, be sure to take a listen to the band's latest single, "Leviathan." Released peak-pandemic (aka April 2020) but recorded a year earlier, the tranquil tune is the antidote to the hell-on-earth that the last six months have been.

I highly recommend joining the group and just scrolling endlessly. You're likely to discover a lot of cutting-edge, off-the-radar local music. You'll find new ways to be creative, tips on strengthening your art and music nerds nerding out about the nerdiest music-nerd stuff.

We've only got three months left in 2020, which means that if you're planning to submit an album for review, please do so sooner rather than later. We never have enough time and space to review everything that gets submitted, and some things that are sent to us late in the year are likely to be reviewed in the first couple months of the new one. But I definitely want to see and hear everything you've been working on during this year of unprecedented change and upheaval.

Send me an email with links to your work or a digital download, as well as production info, liner notes, song lyrics, album art, and anything else you think Seven Days should know about your latest release.