Burlington indie-rock band Gestalt are packing up and moving to Seattle. The band is also gearing up for the release of its debut LP, which, according to a recent Facebook post announcing the move, is two years in the making. As a farewell to the Queen City, the trio will perform a final show on Saturday, August 4, at Radio Bean. Though the new record makes its official debut in the not-too-distant future, burned-CD copies will be available at the show.

According to the post, all proceeds will be donated to the American Civil Liberties Union, "...because the world sucks right now." Damn straight, kiddos.

The band's bassist and vocalist Meredith Davey sent Seven Days a somewhat cryptic and inspirational farewell message: "Insert yourself in that world, you got time and you got your own personal spark. Don't be scared of anybody and don't be scared of telling the truth in this insane present day." 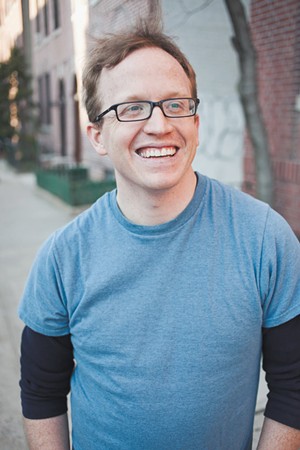 I hope you like tumblers, contortionists, performance artists and general tomfoolery, because the annual Festival of Fools spreads its monkey business all over downtown Burlington Friday through Sunday, August 3 through 5. The Burlington City Arts-sponsored event is far from the only sprawling festival to descend upon Church Street and the surrounding areas — but it may be the most thrilling. You will see some crazy, high-flying shizz.

And, as with any good street fair, the three days of shenanigans are full of music. The beautiful thing is that many acts perform free of charge, such as Providence, R.I.-based street band What Cheer? Brigade. The mighty ensemble — which plays daily at various locations — is known for its zero-fucks-given attitude, as evidenced by a 2011 YouTube video.

In the clip, the group storms New York City's Times Square — seemingly without a permit. Manhattan's finest make a valiant effort to contain the crew, with diminishing returns. Fortunately, the brass-tastic band is a sanctioned part of the entertainment lineup, so Burlington's boys in blue aren't likely to shut down the troupe.

Also of note: Mariachi Flor de Toloache, an NYC-based all-female mariachi band, perform multiple sets throughout the weekend. See  Elizabeth M. Seyler's preview for more info. On Sunday, Pan-Americana outfit the Hokum Bros. tear up the City Hall Park stage. As with all the street artists, these shows are free — but do give generously to their "hats."

Friday and Saturday nights, psychedelic rocker Marco Benevento takes over Club Metronome for a two-night run. You'll have to buy a ticket for these shows, but they're sure to be killer. And given that the NYC-based artist just released a new album, Invisible Baby, we're likely to hear some of his new material.

Another ticketed show to put on your radar this weekend is Chris Gethard at the Vermont Comedy Club. Actually, as with most headliners who drop by the VCC, the comedian takes the stage five times Thursday through Saturday.

If you haven't seen "The Chris Gethard Show" — formerly on NYC public access TV and currently airing on Fusion — you might recognize the bespectacled funnyman from his recurring roles on Comedy Central's "Broad City" and NBC's "The Office."

Visit vermontfestivaloffools.com for details and schedules.

Ducks in a Row

Regular readers are probably aware that Seven Days is routinely inundated with album-review submissions. But in my (almost) two years helming the music section, I don't think our ongoing list has been quite this overloaded. If the submissions stopped today, we'd have enough material to keep the weekly review page stocked until November. So congrats, all you music makers out there! Your production is nearly outpacing our ability to keep up.

The reason I bring this up yet again is that it's now August, which means back-to-school season is right around the corner. And that swiftly transitions into fall, which, it seems, quickly turns to winter. And then 2018 is over. I'm sorry if that bums you out, but I'm a planner. And musicians should be planners, too.

If you're shooting for a 2018 album release, I strongly suggest you let us know soon rather than at the last minute. We'll try to synchronize a review of your work with your album-release show, but we need at least a month's notice. Thanks!

Good news for music fans who oppose hate and bigotry: There's a new(ish) anti-fascist, alt-right-opposing band in town. Composed of guitarist/scream-ist BJ Senecal (Middle Son, Baby Taker), bassist Raf Soto (Smokestack Lightning, Potentially Lobsters) and drummer Tyler Lawrence, grindcore trio Tetsuo make a bold statement on their 2018 Demo, which you can hear on Bandcamp. For instance, the ultra-corrosive thrasher "Fuck the Alt-Right" establishes their politics in fewer than 60 seconds. I doubt I need to spell out the song's hook.

You have a few chances to catch the righteous crew this weekend. On Thursday, Tetsuo rock Burlington DIY venue Jim's Basement along with Harvey Pekar and Augrah. (Message Jim's Basement on Facebook for the address.) On Friday, the band plays a benefit show for nonprofit organization Migrant Justice at the Main Street Museum in White River Junction, along with Nimble Pines and I Love You! And on Sunday, the trio is in Burlington with Augrah, Versus, Hashgrinder and Smokestack Lightning at Radio Bean.

Of course, Tetsuo aren't the only anti-fascist group in town. I wonder what a collaboration or split release with Burlington punks NODON would sound like. Perhaps the bands should arrange a play date!

Folks, Billy Bob Thornton & the Boxmasters perform on Saturday, August 4, at the Higher Ground Ballroom in South Burlington. I wonder if Thornton (yes, the actor) knows that the state's best damn French-fried potaters are located across the street from the club at Al's French Frys? That joke is only funny if you've seen Thornton's groundbreaking performance in Sling Blade. Actually, it's not that funny even if you have seen it.

Banks, "Before I Ever Met You"