Soundbites: Gang of Givers, Caliente in the Capital 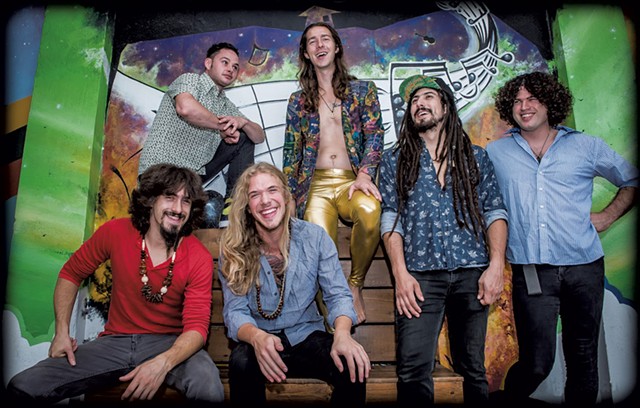 Remember last week when I commended some local music makers who've been using their art to protest and support causes? I speculated that the trend would continue, and Burlington's funk-rockers Gang of Thieves are keeping it going on their upcoming Work Together tour.

In 2016, GoT released their fourth full-length album, Born to Be Loud. The album's flagship song, "Work Together," was all about, well, working together to make things better. On their upcoming tour, which kicks off on Thursday, January 26, in Ithaca, N.Y., GoT plan to make active charitable contributions in as many cities as possible. They are no strangers to volunteering, but this is the first tour they've embarked on with this level of planned generosity.

"When you're on the road for an extended amount of time, you have a lot of down time. It's kind of the nature of the beast — a lot of hurry up and wait. Why not turn that time that we spend reading a 3-day-old newspaper in a coffee shop [into] doing some good?" GoT guitarist Nick Wood tells Seven Days over the phone.

From working at food banks to playing acoustic sets for elderly people, GoT wish to spread their message of positivity, community and togetherness in as many ways as possible. They're still in the planning stages of where and when they'll contribute, but they've already committed to volunteering at Foodlink, a food bank in Rochester, N.Y., and the Richmond Animal League, a homeless shelter for dogs and cats in Richmond, Va.

"The literal energy of people deciding to do something, deciding to help in any way they can, will translate and manifest and build," says GoT vocalist Michael Reit over the phone.

Just before the Work Together tour concludes, GoT play their first-ever headline gig at Higher Ground on Saturday, April 15. After taking some much-deserved downtime, GoT hit the road again in May, venturing out to the West Coast. While in California, they might find themselves in a recording studio — hint, hint.

Caliente in the Capital

This weekend, hordes of people are likely to descend upon our state capital. No, not for another march. But holy crap, gang, did y'all make a statement this past weekend with the Women's March on Montpelier. Unfortunately, I was unable to attend. But I'm proud of all of my friends and associates who did. An estimated 20,000 people showed up, which is nearly three times the population of Montpelier. Well done.

As for this weekend, I'm referring to the seventh annual Spice on Snow Festival. Curated by the Summit School of Traditional Music & Culture, the fest is a celebration of roots, Cajun and Americana music, featuring performances, demonstrations and workshops in locations all around Montpelier. The city basically becomes a giant shindig-hoedown-wing ding from Thursday, January 26, through Sunday, January 29.

Key headliners include zydeco group Cedric Watson Trio and Americana duo Anna and Elizabeth. Watson is a two-time Grammy Award-nominated artist hailing from Lafayette, La. He performs with his trio as well as solo at multiple venues throughout the weekend, including Friday, January 27, at the City Hall Auditorium, and Saturday, January 28, at Bethany Church.

Anna and Elizabeth travel from Cedar Springs, Va., to deliver one of the more unusual performances of the weekend. The two present what's known as a "crankie show," or moving panorama. As fans of local crankie-show auteur Tom Banjo know, in this old-fashioned form of musical storytelling, a long, painted piece of fabric or paper is wound onto spools, and then unrolled within a box cut with a viewing screen. Music or storytelling accompanies the moving picture. I can't say I've ever seen this particular kind of performance, but it sounds adorable and mind-blowing. Anna and Elizabeth's crankie show is on Friday, January 27, at the Union Elementary School auditorium.

The Vermont Arts Council and the National Endowment for the Arts sponsor the festival. With federal support for the latter organization possibly endangered, it might be a good idea to attend these kinds of events. Just sayin'. For more on the fest, check out summit-school.org.

Over the past several weeks, you've probably seen a popular meme circulating on Facebook in which users list their top 10 most influential albums from their teenage years. Actually, it was not clear to me whether the survey meant the top 10 albums from when I was 13 through 19, or a list of the top 10 most influential albums that came out during one's high school years. I saw people responding both ways. For me, those would be very different lists.

Most of my music-minded friends took the bait, and the results were great fun to read. Frequently included were Nirvana's Nevermind, Green Day's Dookie, Alanis Morissette's Jagged Little Pill, and various albums from Beastie Boys, Smashing Pumpkins and Phish.

What surprised me was, of the dozens of friends who participated, only one person included a movie soundtrack on their list. Soundtracks were huge in the '90s and hugely influential for me in my early teenage years. I remember countless Friday nights sprawled out on a friend's futon listening to the soundtracks to William Shakespeare's Romeo + Juliet, Natural Born Killers and Pulp Fiction, among others.

Soundtracks gave me not only my first exposure to individual artists I would later love but to entire realms of music. The Trainspotting soundtrack gave me my first taste of Britpop. The Boogie Nights soundtracks — there are two — turned me on to '70s funk and soul. As a middle schooler who wasn't exposed to much popular music, soundtracks frequently acted as my musical godparents.

Beyond that, soundtracks captivated me because I loved considering how music was selected to help tell a story and to create a unified musical companion piece. As Adam Scott's soundtrack-loving Ben Wyatt says on NBC's "Parks and Recreation," "I kind of look at it like it's your favorite directors making a mixtape just for you." As cheesy as that sounds, he's not wrong.

You know those little blurbs about upcoming shows that run alongside our club listings? Turn the page. See, there's one right there. We call them "spotlights."

In order to run a spotlight, we need print-quality, high-resolution images of the band or artist. Spotlights often end up going to larger, national touring acts, because they have print-quality photos at the ready. Locals? Less so.

Since Vermont is kind of our thing here, we'd love to be able to spotlight more local bands and artists. But we can't do it alone. Are you in a band? Do you have high-res photos? If not, get on it. Find a friend with a decent camera. Heck, most smartphones can take usable shots. And who doesn't love a good photo shoot?