Soundbites: Free to Be ... You And Me | Music News + Views | Seven Days | Vermont's Independent Voice

Soundbites: Free to Be ... You And Me

After 10 solid days of nonstop action at the Burlington Discover Jazz Festival, you might be itching for your next free outdoor music fix. And even if you're prone to mosquito bites like I am, don't let the threat of airborne pests stop you from basking in the glorious — and free — sounds of summer. For example...

Every Wednesday and Friday from now through the end of August, Burlington City Arts puts on a free lunchtime concert in City Hall Park. This week's entries are the USAF American Clarinet Quartet on Wednesday, June 13; boisterous bluegrass dude Pappy (Cabinet) on Friday, June 15; and singer-songwriter Jacob Green on Wednesday, June 20. Later on this summer, the eclectic lineup includes Francesca Blanchard, Hana Zara, the Hokum Brothers, Danza Del Fuego and more than a dozen other locals.

Moving on, last week, local independent radio station the Point WNCS-FM announced its annual summer concert series. The station puts on a free show every Thursday in July at Burlington's Battery Park, and this year's lineup is probably the best it's curated in years.

Formerly local indie dance orchestra Rubblebucket return to their hometown on July 5. The group dropped a new single, the chilled-out "Fruity," in May.

On July 12, acclaimed singer-songwriter Natalie Prass touches down. The almighty critics over at Pitchfork just gave her new album, The Future and the Past, fairly decent marks. Reviewer Oliv ia Horn notes a progression in the Virginian songwriter's work: "Prass stands behind the more-is-more philosophy that guided her debut, adding layers of synth, bass and percussion to fill the spaces where she's pulled back the woodwinds and strings." She also notes, "Prass has a sharp sensitivity to everyday cruelty." Don't sleep on this show, people.

Hometown folk heroes the DuPont Brothers take the stage on July 19. If we're lucky, perhaps we'll get a preview of the DuPonts' forthcoming SoundBrother album.

Philadelphia piano-soul rockers Low Cut Connie close out the series with their always-outrageous antics on July 26. 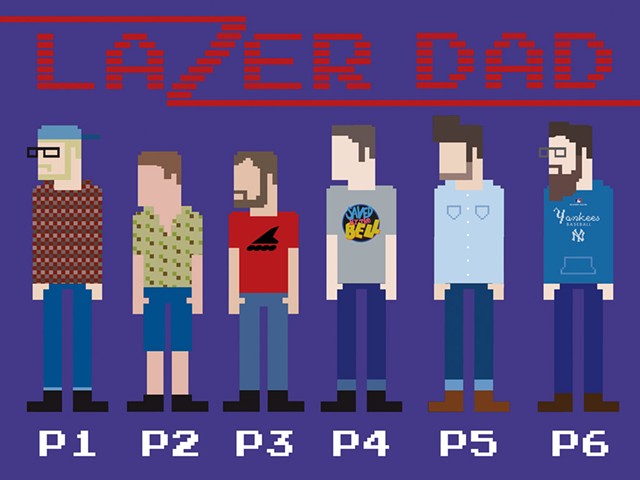 While inputting this week's club listings, I came upon a relatively new local band that instantly appealed to the '90s kid in me. Known as Lazer Dad, the six-piece '90s cover band takes over Winooski's Last Stop Sports Bar on Friday.

The band's mission of reviving classic cuts by artists ranging from Nirvana to Third Eye Blind to the Backstreet Boys certainly spoke to me. But what really caught my eye was the website's kitschy 8-bit video game aesthetic and the band's running "dad" theme — though none of the fellas in the group is currently a dad. Each member has a defined persona, à la the Spice Girls: Lead guitarist Andy Kuzmin is the "cool" dad; bassist Axel Handy is the "smooth" dad; drummer Tanner Acebo is the "bad" dad; lead vocalist Alex Koch is the "weird" dad; rhythm guitarist Dante Rossi is the "mystery" dad; and keyboardist Erick Lattrell is the "electric" dad, rounding out the group.

In an email to Seven Days, Kuzmin notes his group's goal is to amass enough material to host an evening of exclusively '90s live-band karaoke. But until then, fans of "the last great decade" — as the National Geographic channel called the '90s in a 2014 docu-series — should be stoked to simply pump up the jams and get jiggy. Also, you get bonus point for dressing in Hypercolor, Z. Cavaricci jeans, Umbro shorts, or whatever fine '90s fashions you can pick up at a thrift store or dig out of the closet.

Unless you've been living in a mountain cave, you've surely heard that on July 1 Vermont will become one of nine states — plus Washington, D.C. — to legalize recreational cannabis. Ever since the new legislation was finalized earlier this year, I've been secretly hoping a local musician would pen a celebratory anthem. Last week, my wish came true.

On Tuesday, June 5, Franklin singer-songwriter Josh Worman unveiled "Legal Weed," his tribute to, well, you get it. A collaboration of Worman and the Mountain Says No's Ben Maddox, the song begins as a placid campfire ballad but quickly becomes a wacky tune full of hilariously off-time percussive crashes and bong-rip samples.

Preceding the easily repeated chorus — a joyous exclamation of "Legal weed!" — Worman has some thoughts on the state of the world and how to deal with them:

Not just a celebration of ganja, the track is also staunchly anti-Trump. Here are some choice lyrics that take the Orange One down a couple of notches:

"Nuclear war could happen next door / 'Cause a fool's short finger's on the button / And he leaves no doubt that all he cares about / Is poontang, Putin and puttin'." Damn! Gotta love some alliteration, especially when it's part of a good put-down.

If you're planning to celebrate Legalization Day at one of the numerous semipublic events on July 1 — to the best of my knowledge, they're all happening on private property, since smoking weed in public will remain illegal — check in with whoever's running the sound system and get them to blast Worman's song.

Listen to the track at joshworman.bandcamp.com. And be sure to check out Seven Days' Cannabeat section for the latest on everything weed-related in Vermont, plus the finer points of how to stay on the right side of the law when the big day arrives.

On Friday, Club Metronome presents the first installment of a new series called Out of the Attic. The queer-focused event features music from Northampton, Mass., punk-Americana group Bella's Bartok and DJ Craig Mitchell. Given that June is LGBT Pride Month, the showcase is the first in a string of hella gay events we'll be highlighting this month.

Make sure to cast your vote in the Seven Daysies awards! Voting is now open and closes on Monday, June 25, at 5 p.m. Make your voice heard!