For all the perks of living in the Green Mountains, going out into a giant field in the country to hear some amazing music is near the top of my list. We only get about 15 minutes of summer, so there's a real carpe diem vibe this time of year. Seriously, one minute the Vermont Symphony Orchestra is enchanting you at Shelburne Museum, and the next, you're buying Yaktrax for your dog.

Fortunately, we're still in the thick of festival season, folks. And the slate of upcoming fests these next two weeks is really not to be missed.

2021 was supposed to be Woodchuck's big 30th birthday smash, but we all know what happened, right? (Like, honestly, do I have to keep saying it? They make me type the whole stupid disease out in caps. Let's skip it this time, all right?)

So this year will serve as the celebration of three decades since Woodchuck kick-started the whole hard cider movement. There aren't many better ways to do it than with a few thousand friends and fans and a great day of live music. Pop over to woodchuckciderstock.com for tickets and more information.

Things really get wild the following weekend. Specifically, Saturday, August 27, might go down as the busiest day of music in Vermont this year.

It starts with the return of one of my favorite local events, the Nightshade Festival. Held at the Red Barn Gardens in Williston, Nightshade continues its quest to bring together great food and local music — and craft beverages from Foam Brewers. This year's lineup is chock-full of Vermont talent, featuring Brattleboro indie rockers Thus Love, neo-soul singer Ivamae, synth kings roost.world, DJ Taka, indie songwriter Lily Seabird and many others. There are also great out-of-town acts, such as Massachusetts psych rockers Carinae.

The Nightshade Festival grew out of a series of house shows called the Nightshade Kitchen. Originally hosted in the Burlington home of founder Guthrie Stoltzfus, aka R&B singer-songwriter Guthrie Galileo, the series paired intimate, often acoustic performances with a menu created and prepared by Stoltzfus, who is also a chef.

"It was a way to combine the things I love, all while hanging out with some of my favorite people," Stoltzfus told me as we caught up last week in the Old North End. That's where the first Nightshade festivals happened, then they moved to Red Barn.

On top of a full, farm-fresh menu prepared by Nightshade Kitchen, other food vendors, such as the Jamaican Jewelz food truck, will be on hand to provide treats. Steven Yardley will also return for the fifth iteration of the festival, bringing Sonic Steve's Jammbulance out for portable rocking.

If you're looking for Stoltzfus to make an appearance as his R&B-crooning alter ego, well, best to temper your expectations.

"Every year someone asks me if this is the year I'll play my own fest," Stoltzfus said with a laugh and rueful shake of the head. "There's no way. That's just too much work! For music and for food, I need to concentrate and be all in with whatever I'm doing. So, yeah, I'll just enjoy all the other music."

Tickets for Nightshade are available over at sevendaystickets.com. 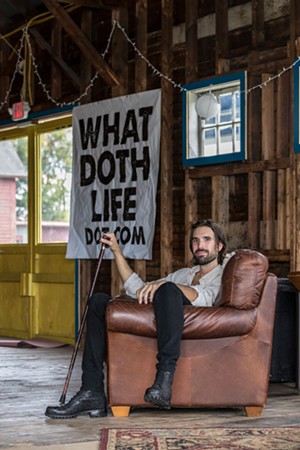 As I hinted above, that's not the only festival happening next Saturday. No. 2 is also near and dear to my heart: the What Doth Life DIY Festival in Windsor.

"We call it the DIY Festival to highlight the independent spirit of original artists and entrepreneurs," WDL cofounder Kiel Alarcon wrote by email. "Many venues in the area prefer to book cover bands and ignore original, left-of-the-dial music. We aim to give original artists an avenue to share their music and connect with their community."

The WDL DIY fest, held at the Windsor Exchange, isn't sponsored by any large corporations or even one of the area's big breweries. Most of the festival's funds come from community donations and small business sponsors, such as music shop Hanover Strings in New Hampshire. The Town of Windsor is also a supporter. Vendors such as Eat It Loud Cakerie in Lebanon, N.H., and Windsor's own Covered Bridge Cookies help establish the hyper-local feel. There's also a pop-up record shop on the premises called What's Missing Records.

The bill itself is loaded with some of Vermont's best original rock bands, including Windsor's the Pilgrims, White River Junction punk rockers Time Life Magazine, Brattleboro electro-pop act Dutch Experts and Burlington surf rockers the Wet Ones, among many other acts curated by the WDL crew. Head over to whatdothlife.com for more information. Admission is free, but donations are encouraged.

Meanwhile, in Burlington, Saturday, August 27, is the annual A_Dog Day, which celebrates the life of the late, great DJ and turntablist Andy "A_Dog" Williams. The daylong bash starts off at the waterfront skate park bearing Williams' name at 12:15 p.m. with skateboarding demos, DJs, break-dance crews, live bands, food trucks and much more. The party moves to Foam Brewers at 4 p.m. before shifting into late-night mode later at Nectar's and Club Metronome.

Look, I was going to omit that I'm playing the fest, but why bother? You guys can read, and sooner or later it was going to happen. Just to prove this isn't a conflict of interest, I'll remind everyone that it's a free, charitable gig, and I'll also let you know that I've been sounding really bad at rehearsal. (Also, I'm literally shouting out multiple other concerts you can go to that day. Give me a break over here!)

Finally, we'll switch it up a little and invite you to a good old-fashioned Vermont hoedown. Folk singer and banjo man Rik Palieri is producing, hosting and performing at this year's edition of the Great Vermont Barn Dance at Isham Family Farm in Williston. And, yes, it is also happening on Saturday, August 27 — seriously, someone make sure Burlington superfan Tim Lewis doesn't have a heart attack trying to see too much music that day.

In a phone call last week, Palieri called the event "a throwback to how Vermont used to experience music." He explained that he started the barn dance series in 2017 after a visit to the Grand Ole Opry in Nashville, Tenn. He envisioned it as a variety show-style event held in a barn and simultaneously livestreamed around the world.

"We had people listening in Europe, even in Istanbul," Palieri said.

Before the pandemic, Palieri was putting on the barn dances four times a year, with performances from locals such as Rick Norcross and the Starline Rhythm Boys. The dances were held at the Hinesburg Town Hall until the folks at the Isham Family Farm invited Palieri to use their facilities.

"They've been doing a lot of theater shows and classical music stuff," Palieri said. "So it just made sense to do the barn dance there. It fit like a glove."

Palieri, fresh off recovering from rotator cuff surgery, is raring to perform again after he had to stop playing banjo and guitar for a while. Other performances include singer-songwriter Jon Gailmor, blues guitarist Bill Ellis, storytelling from author Bill Schubart and clog dancing demonstrations with Ann Whiting. Visit ishamfamilyfarm.com/firstearth-summer-series for tickets and more info.

Big Heavy World continues its mission to document the history of Vermont's musicians. As part of the Green Mountain Digital Archive, a statewide initiative to consolidate Vermont's digital cultural content into one source, the Burlington-based nonprofit has donated approximately 5,000 images of albums made by Vermont musicians to the Digital Public Library of America. With support from the staff at Middlebury College, Big Heavy World added the massive cross section of Vermont music history to the national archive, ensuring that thousands of album covers made in the Green Mountains will be preserved for antiquity.

Vermont vocalist, trumpeter and composer Jennifer Hartswick has released a new single titled "Only Time Will Tell." Cowritten with guitarist, producer and Vermont expat Nick Cassarino, the song explores the story of a woman scorned. "All too often we stay too long because it's familiar, not because it's good for our soul," Hartswick wrote in the press release for the track. "Only Time Will Tell" is the first single from Hartswick's forthcoming LP, Something in the Water, which releases on September 9 on Brother Mister Productions.