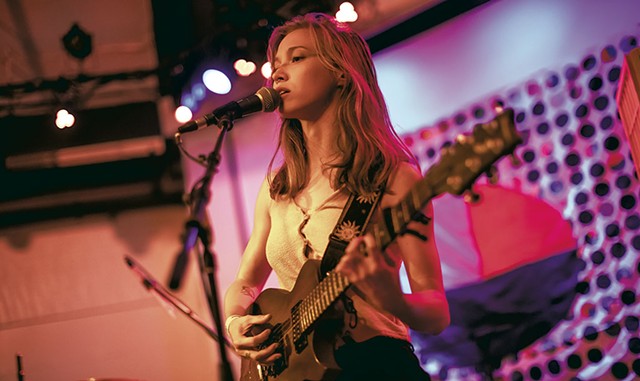 I've always been obsessed with sophomore albums. Is there a better yardstick for whether or not a band has it? Debut records can be hot messes; artists are almost always broke when they make their first record (unless you're the Strokes or Lana Del Rey), so they usually cut the albums in a few days on suspect equipment with no experience.

Think about the jump Radiohead took between Pablo Honey and The Bends or the power Public Enemy gained between Yo! Bum Rush the Show and It Takes A Nation of Millions to Hold Us Back. It's utterly fascinating to see artists perfect their craft. Despite the trope of the sophomore album slump — oh, hey there, Bloc Party — I posit that the second record is when one can tell whether an artist possesses greatness.

Enter Father Figuer's new LP, Jack of All Fruits. The follow-up to their 2020 debut Transitions, the band's second album comes out on Friday, December 10, and finds the group in a state of flux, both musically and personally.

"We started making the album a year ago," singer, guitarist and chief songwriter Erin White told Seven Days last weekend. "We had people in school and working full time, so we had to chip away at the thing two and three hours at a time. By the end, I was having to take submissive naps just to not explode."

The process began with White and her bandmates traveling to the Northeast Kingdom. Engineer Miles Foy's aunt provided the space as the band cut nine tracks through an old Tascam m208 board, and Foy focused on capturing Father Figuer's stellar live sound. White mixed the songs herself before sending them on to Ryan Cohen at Robot Dog Studio to master.

The result is a sonically adventurous, colorful collection of slow-burn indie rock songs in which the band eases away from the punk-edged material of Transitions. In the year between records, Father Figuer have developed an affinity for My Bloody Valentine-like atmospheres. Though they still rock when the moment calls for it — such as the dynamically thrilling "Rerto" — the band has gone full Starship Enterprise these days, exploring space with aplomb.

One reason for the tonal change is that the band has slimmed down to a trio. Colead singer and guitarist Caroline Franks departed after their debut, leaving core musicians White, drummer Elise Albertini and bassist David Roche.

"Being a trio has given us a chance to spread out," White asserted, "not just sonically but actually, physically. David even dances on stage now! And I love the space that he and Elise can explore with me."

The three have also grown closer as friends. Albertini and Roche, who are partners, podded during the lockdown with White, as well as engineer Foy and his partner, filmmaker and artist Mia Schaumburg.

"With COVID, you had to pick what household you were going to hang with," White said. "So Elise and David and I worked on these songs in their apartment, just getting closer the whole time. It really bonded the band in this robust way."

That augmented connection is apparent throughout Jack of All Fruits. There's the patience and songwriting nous of "Stone," a song that ever-so-gradually builds on White's mantra-like guitar before Albertini drops in with a ramshackle, phase-shifted drumbeat. And there's the creeping menace of "Sink," with White's gorgeous, almost-whispered melody riding atop the band as it transitions from an ominous buildup into a dance groove.

"I am something like a gun, feel the echo as it comes," White sings. As she did on the previous record, White often purposely pronounces words oddly so that it sounds as if the vocal track were running backward or she were employing a made-up language. Sigur Ros does the same with their music. Lyrics that are hard to decipher underscore the content of many of White's songs: the degradation of personal relationships and communication that's lost.

"With the first record, I don't think we necessarily did a great job of translating our inner worlds to the listener," White admits. "We rushed it for some reason. We just didn't know what we were doing yet or how to organize ourselves."

Learning how to manage her artistic endeavors has paid dividends for White. Taking a more central role in Father Figuer as a songwriter and singer was only the first step in pursuing her artistic ambitions. White not only mixed the new album but also immersed herself in Photoshop and Adobe Premiere Pro to create the LP's cover art. She also started dipping her toes into filmmaking, working with Schaumburg on a short film.

"It was supposed to be a music video," White quipped. "Mia accompanied us during the months we made the record, filming on her Bolex H-16 and a cheap camcorder."

The amount of footage grew, turning from a video to what White called a "mini-doc." While she and her bandmates plan to make more videos, the footage Schaumburg shot will be repurposed and released in 2022.

The film is part of a trend in White's life these days, which could best be filed under "project consolidation." At some point during the making of Jack of All Fruits, the 24-year-old Pennsylvania native realized that, rather than spread herself thin on disparate artistic projects, she would be better served by combining her talents in interlocking projects. Instead of focusing only on music with Father Figuer, she now approaches the band from a multimedia standpoint, integrating art, film and technology.

That interdisciplinary union will be on full display for the album release show, also on December 10, at Karma Birdhouse in Burlington. A traditional show would include booking several bands to open for Father Figuer, but White has instead curated a night of music and art. Musician and graphic designer Remi Russin (Community Garden, Math For Poets) will be part of the opening, along with fellow artists Kenzie Hines (printmaking and textiles), Cooper Gardner (visual art), Nick Tansey (visual and other arts). Also on display will be Schaumburg's photography and film and Albertini's pottery.

"I'm almost more interested in the art side of the show, really," White said, laughing as she recalled that she mixed most of Jack of All Fruits from her own art studio. "These are the events I want to be curating in general, anyway."

The future is certainly bright for Father Figuer, with an excellent new album, a multimedia release show, music videos and short films in the works. White even hints that the next record might be a concept album, as the band has started leaning into the instrumental side of their music. The last few years have taught her not to get too ahead of herself, however.

"I've learned that I have to keep myself focused," she said, "or I'll never do any of this stuff."

The holidays are here, and so are the songs. While we haven't received anything as out-of-left-field as Savage Hen's brutal 2018 Christmas record, The Red, Vermont artists aren't slipping this year. Singer-songwriter Alison Turner, better known as AliT, has released "Snowed In" to celebrate the season of forced family conversations and epic hangovers in your childhood bedroom. Over a gently picked guitar lick, Turner reminisces about twinkling lights ("I know I use them all year round / but they're shining brighter somehow"), watching holiday movies cuddled on a couch and drinking wine by the fire. It's a suitably festive tune, perfect for, well, getting snowed in. Which seems highly likely! Happy Holidays.

Speaking of all things Winter Wonderland, the Depot is going all-in on festive events. Fresh off its "up to sNOw good" adult prom event last week, the St. Albans restaurant and live venue is hosting its first Santa Breakfast on Sunday, December 19. It's exactly what it sounds like, with the bearded Peeping Tom/Father Christmas hanging out, taking pictures and listening to the demands of children. There will be Christmas music, a breakfast buffet, games, activities and prizes to help get people into the holiday spirit.

I recall my last visit to talk to Santa. I asked him to bring bassist Cliff Burton back to life, because I really hated the new Metallica album. The old bastard summarily returned me to my rather vexed mother, and that's when I knew. Hopefully, today's youth have more realistic demands of ol' Saint Nick.

Oh, sweet Jeebus. Waking Windows has finally announced the new dates for the oft-delayed 10th edition of the Winooski music festival! The real most magical time of the year for me is always early May, when the crown jewel festival of Vermont music and independent artists kicks off. After being postponed a few times thanks to the pesky pandemic, Waking Windows will return in 2022 — May 13 to 15, to be precise. Keep your eyes peeled for a lineup announcement on Wednesday, December 8 — aka the street date of this paper.

Hey, did you know we have a blog that keeps you updated on this stuff? Be sure to check it out for festival lineup news and much more.