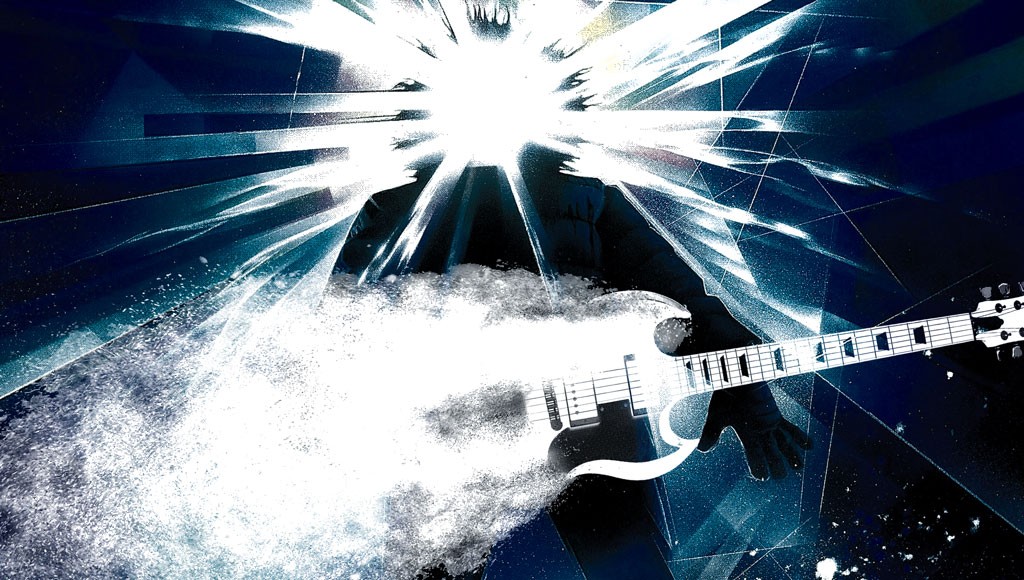 It may be the dead of winter, but at least we aren't stuck on a frozen ice continent with a ravenous, parasitic alien entity consuming and absorbing every living thing in its path like in John Carpenter's The Thing, am I right? That's my awkward segue into announcing an upcoming screening of the legendary horror director's campy 1982 magnum opus — but with a twist! Burlington's metal-inspired "instant composition" band Zentauri provide the soundtrack.

The improvisational accompanists team up with the ongoing gore-tastic film screening series Cinema Casualties on Wednesday, January 31, at ArtsRiot in Burlington. The series generally presents only the schlockiest of horror flicks: C.H.U.D. and Jason Lives: Friday the 13th Part VI, for example. But CC founder David Zeidler also mixes in the occasional masterpiece, such as Suspiria and, now, The Thing.

Though it's the first time CC will add a live soundtrack, it's not Zentauri's first go at the silver screen. Seven Days recently caught up with the group's guitarist and man of 1,000 faces Matt Hagen (the High Breaks, Savage Hen, Burning Monk, Matt the Gnat and the Gators, and a bajillion other bands) to get a bit of context for the grand union.

"Improvising can be synonymous with jamming or noodling," said Hagen over the phone. "[But] we try to convey a story. What we do is very purposeful."

"We were like, 'Holy shit. What did we get ourselves into?'" said Hagen. Though it may have been a slog, Hagen said the iconic "I am Spartacus" climax was a satisfying payoff, and the experience whetted the pair's appetite for further exploration.

To date, Hagen and Stella have scored Evil Dead II, Predator and Ghostbusters — the last of which was conceived and performed on the day that Harold Ramis died. The actor famously portrayed OG Ghostbuster Dr. Egon Spengler. Most recently, Zentauri took on the cult horror classic Pumpkinhead last Halloween.

In case you're wondering how exactly a live score functions with a film that already has its own soundtrack — as I did — it's pretty simple: They mute the flick. Given that the horror genre is all about showing and not telling, and relies heavily on slow-building tension, it's not always important to hear the dialogue — especially for well-known, cult films. Exposition is not as much a priority as rocking the eff out. Movies heavy on the yackety-yack are likely not good contenders, so if you were hoping to see Zentauri work their magic on My Dinner With Andre, it's probably never going to happen. (Ahem: Challenge extended.)

For Wednesday's performance, Zentauri are bigger than ever: Guitarist Steve Sharp and cellist Lauren Costello join the group.

Oh, and here's one fun fact I learned while googling The Thing: Scientists and researchers at Antarctica's Amundsen-Scott South Pole Station, a real-life facility similar to the setting for Carpenter's film, have an annual tradition of watching not only the Halloween director's version of the John W. Campbell Jr. novella, but also Christian Nyby's 1951 adaptation, The Thing From Another World and Matthijs van Heijningen Jr.'s 2011 remake. That's some dark, meta shit right there.

The album is largely composed of heavy rock, thanks to the Cave Bees, Black Rabbit and Dino Bravo, among others. But the album makes room for other styles, too, such as Andriana Chobot's modern pop song "Cascade" and Eastern Mountain Time's melancholy country ballad "Low-Down Mid-December." Interviews are kept relatively brief, rarely exceeding one minute in duration.

The album is available to stream or download (for free!) on Bandcamp.

Also: Volume One? I smell a sequel. Indeed, Lewis confirmed via email that the project will continue into the coming year.

The Snow Ball, the dance party at Radio Bean and Light Club Lamp Shop this Saturday, January 27, has one of the best taglines I've seen in a while: "Winter gowns, ice palace crowns, tundra clowns and sister sounds." Guess it's going to be a majestic, semiformal, lady-centric circus, especially when considering the lineup: electro-clash duo Heloise & the Savoir Faire, indie rockers Julia Caesar and Clever Girls, plus Providence, R.I.-based psych-rockers Night Nurses.

Speaking of Julia Caesar, remember a couple of weeks ago when I mentioned how dope it would be if they put out a record this year? It turns out I got my wish! Word on the street — and on the band's Facebook page — is that they've recorded a number of tracks at the Gnomehaus in Williston. Front woman Katy Hellman mentioned in a recent phone conversation that they'll be debuting new material at the Snow Ball and that they're currently planning their next moves for the record.

Another Vermont supergroup/tribute act gears up for a four-week residency at Radio Bean. Dr. Sammy Love — consisting of bassist Daniel Bishop (Grundlefunk), keyboardist Gyasi Garcia (Tar Iguana), drummer Dan Ryan (Madaila) and guitarist Jonah Ullman — back front woman Ivamae through recognizable soul and R&B covers. You'll find them either on the Bean's stage or over yonder at the Light Club Lamp Shop every Thursday from January 25 through February 22, excluding February 8.

What a tease! Last week, shortly after Higher Ground Presents announced David Byrne's August 1 show as part of the Ben & Jerry's Concerts on the Green series at the Shelburne Museum, the show was canceled. Tickets never even went on sale.

Apparently, the "size and scope" of Byrne's show couldn't be accommodated, according to a statement from HGP. At first, I assumed that meant there were supposed to be pyrotechnics, water features, a 3D component, a parade, a 12-course meal, acrobats working without a net and/or holograms.

As it turns out, Byrne's vision for his upcoming tour — his first since 2009 — is exactly the opposite. As BrooklynVegan reported in December, the Talking Heads front man intends for his stages be "completely clear," meaning that all musicians would be playing mobile instruments with most of their gear hidden from sight. I guess "less is more" means "less is more complicated" in this case.