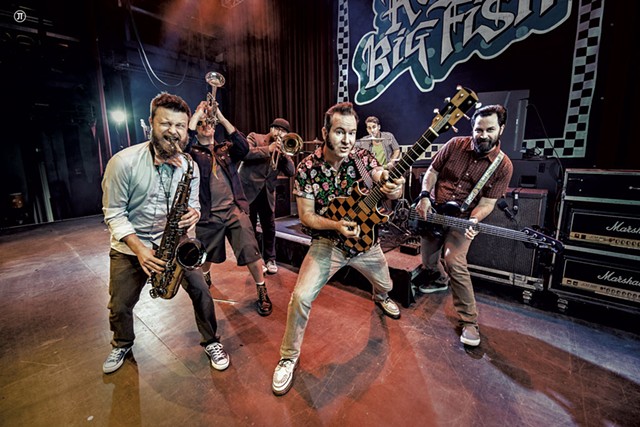 When March rolls around, I often think of Karl Marx's famous statement, often paraphrased "Religion is the opiate of the masses." That's because two holidays with Christian origins — Mardi Gras and Saint Patrick's Day — fall practically back-to-back, and both usually involve (require?) heavy drinking. The act of partying on these formerly holy days — not engaging in religious reflection — provides euphoric escape, yet the same distracting and cathartic effect to which Marx referred is achieved. Oh, the irony...

With that in mind: Magic Hat Brewing's annual Mardi Gras celebration unfolds in downtown Burlington this weekend, with much of the hullabaloo surrounding a big, fancy parade on Saturday, March 10. And, as per usual, the downtown club scene is jam-packed with concerts, dance parties and other wild wingdings sure to please music lovers and the I-can't-feel-my-face crowd alike.

Much of the action picks up after the parade ends, but eager revelers may also want to check out some dope happenings the night before — namely, Reel Big Fish.

I think it's pretty wild that the pop-ska legends are taking over the relatively small Club Metronome on Friday, March 9. Anyone who came of age in the '90s can attest that the horn-heavy band was an inescapable part of the decade's pop-culture landscape. And even if you weren't a fan, you at least had a cousin who was. I'd be lying if I said I didn't have a special place in my heart for hits such as "Sell Out" and "She Has a Girlfriend Now."

Nectar's and Club Metronome essentially operate as the grand Mardi Gras nexus. Preceding, following and coinciding with the parade, the clubs provide 12-plus hours of live music, culminating in wee-hours sets from local rock-fusion band Swimmer and DJ Luke the Knife.

Perhaps the most tantalizing act included in the marathon lineup is Shots Fired, a new project from Karl Denson's Tiny Universe guitarist DJ Williams. The sizzling rock supergroup features a cavalcade of folks who've played with acts such as Slightly Stoopid, Lyrics Born, Dave Matthews Band and Pimps of Joytime.

Additionally, electronica jam band Lotus take over Metronome directly after the raucous processional. The Philadelphia- and Denver-based group usually rocks the Higher Ground Ballroom when it plays in the area, so you're getting a much more intimate performance by comparison.

If you feel like fleeing the scene after the parade, head up the street to Radio Bean for a bonker-balls vinyl set from DJ Lee J — aka proprietor Lee Anderson. For late-night revels, Philly's DJ Pete Moss keeps the buzz going with insatiable disco and house beats at Half Lounge.

Dance Comp in the 'Noosk

One of Saturday's unofficial Mardi Gras events of note is DJ Jonathan Toubin's Soul Clap and Dance-Off at the Monkey House in Winooski. Toubin, founder of NYC-based production company New York Night Train, regularly hosts '60s-era soul parties at which he spins nothing but deep-cut 45s.

The Village Voice named him best DJ in its 2015 "Best of NYC" issue, stating, "We might live in an EDM world, but Jonathan Toubin has no truck with today's musical whims. [His] Soul Clap and Dance-Off has brought throwback pizzazz and retro cool to New York's late-night underground ... No fist-bumps or atomic bass drops here."

Sounds pretty dope, right? But wait — there's more! The party's central event is a freaking midnight dance-off. With numbers pinned to their backs, contestants are divided into several heats. The winners of these enter a final round to show the world what their mamas gave them. The ultimate champion walks away with $100.

One thing I need to mention: I'm serving as one of the competition's judges, as are WRUV hip-hop DJ extraordinaire Melo Grant and Mick Jagger superfan Dennis Lemoine.

Just sayin': You know that dance move where you take a feather boa or scarf in both hands and rub it across your butt? That's one of my all-time faves — though it's probably more appropriate for an old-timey burlesque show.

Big congrats to Julia Caesar and the Mountain Carol for reaching their Kickstarter goals! Both bands recently achieved their all-or-nothing, crowdfunded campaigns to finance their upcoming releases: an EP called Heavy Flow and a currently untitled full-length, respectively. Currently, neither band has announced a release date for these recordings. But with their financing secured, I imagine we'll be grooving to their sweet jams sooner rather than later.

Yes, you read that right.

I mean, think about it. Is there anything more metal than all of those papa penguins struggling to cross the frozen wasteland while carrying their unborn children? No. That's the most metal thing there is.

If you want to see the hardscrabble life of Antarctica's most adorable inhabitants paired with Zentauri's thrashing fury, head over to Club Metronome on Monday, March 12.

The Voidz, "All Wordz Are Made Up"

The Brinks, "Limit of the Deadline"

Bobbysocks, "Cross Over the Bridge'"