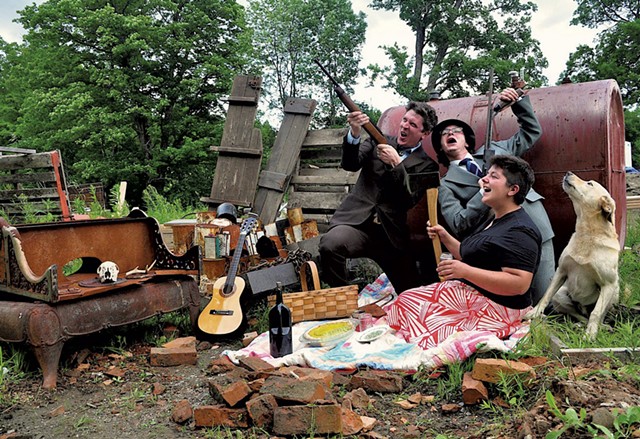 It's a good week to be a fan of local surf music. For starters, everyone's favorite killer surf-punk robots, the Tsunamibots, are releasing their latest record, The Crushing, with a pair of shows this weekend — see the story here. Meanwhile, in Montpelier, our old friends the Concrete Rivals are reuniting for a show at Charlie-O's World Famous this Friday, October 7, with support from capital-city rocker Abby Jenne.

To refresh your memory, the Rivals emerged during the relatively recent — and still mostly inexplicable — local surf-rock mini-boom that started about five years ago. For, like, 20 years, our ocean-less state could lay claim to precisely one legit surf-rock band: Barbacoa. But then cool surf bands started coming out the woodwork — or maybe just the woods? Among them were the High Breaks and the Tsunamibots, as well as Vultures of Cult, who took a short beach vacation on their 2014 EP, SVRF. Especially considering VoC typically trade in high-concept stoner metal, the EP was an astonishingly cool slice of surf-rock. And then there were the Concrete Rivals, led by Jay Ekis, who might be the most criminally underappreciated guitar god in Vermont.

All of VT's surf crews offer — or offered — slightly skewed iterations of the genre. Barbacoa, for example, are the closest to the vintage sounds of Dick Dale and the Ventures, but tweak tradition with a tendency toward the ethereal work of spaghetti-Western maestro Ennio Morricone. Inspired by David Lynch as much as Dale, the High Breaks inject a dose of the surreal into their hazy surf. The Tsunamibots are killer robots.

The Rivals played with a harder edge than those bands, influenced not just by the classic captains of surf music but unlikely sources such as Slayer. Their melding of surf and metal had no real corollary, at least not locally. As Seven Days reviewer Justin Crowther put it in his 2011 review of the band's lone album, Eat Their Weight in Snakes, "The Rivals' approach would leave early thrash-metal pioneers such as Judas Priest and Metallica enthused. But their eclectic surf-metal compositions should interest punks, metalheads and rockabilly zealots alike."

Sadly, the Rivals stopped playing about three years ago when bassist Jen Smither and her husband moved to Virginia, where she still lives and works. As for the rest of the band, drummer Ben Roy is still local and active. His punk band Pistol Fist's 2015 debut, Wrist Soup, was one of my favorite local records of that year. He's also got a new psych-rock doo-wop band called Parakeets and plays in the experimental Montpelier postrock band the July 26th Movement.

As for Ekis, he's continued writing songs but hasn't recorded in a while. He does play regularly with the local Cajun band the Green Mountain Playboys. He has also, apparently, really gotten into hiking.

In a recent email, Ekis writes that he often will get tunes stuck in his head while hiking, which he refers to as his "trail songs." While hiking a section of the Long Trail over the summer, he confided to some fellow hikers that he had Stevie Wonder's "For Once in My Life" stalled on mental repeat that day. That led to his being given perhaps the greatest trail name ever: Stevie Wander. 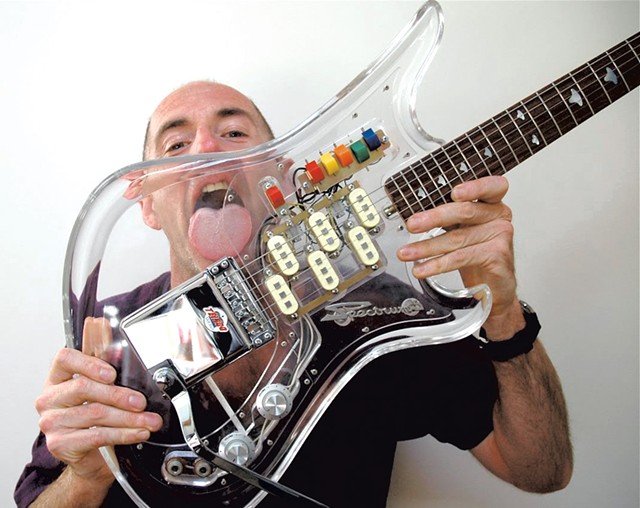 In other news, Burlington is a better place when Greg Davis is doing Greg Davis things. Later this month, the composer will kick off the next season of his fascinating experimental music series, Signals. We'll delve into that in a couple of weeks. In the meantime, Davis has coordinated an intriguing show this week featuring Henry Kaiser/Damon Smith and the LSD Organic Duo.

The name to know here is Kaiser, a Grammy-winning guitarist who has appeared on more than 270 recordings and has worked with ... well, everyone. Here's a comically abridged list: Herbie Hancock, Bill Frisell, Cecil Taylor, Michael Stipe, Nels Cline, Gregg Allman, Phil Lesh and Jerry Garcia. Dude gets around. Seriously. Get this: In addition to being one of the most respected contemporary guitarists and composers in the world, he's also a deep-sea diver and cameraman who has logged more footage under the Antarctic ice than anyone else, ever. With all due respect to Dos Equis pitchman Jonathan Goldsmith, Kaiser is the most interesting man in the world.

And the rest of the lineup ain't bad, either. Smith is a globally renowned double bassist whose credits are only slightly less impressive than Kaiser's. And the LSD Organic Duo is a collaboration of percussionist Leland Scott Davis (LSD, get it?) and saxophonist Jackson Moore. Vermont resident Davis is highly regarded in avant-garde jazz and world-music circles. Jackson is a wildly creative player who presently runs the digital-arts studio at Bennington College.

Check 'em out on Tuesday, October 11, at the cozy Light Club Lamp Shop in Burlington.

In the past week we've unveiled two new weekly series on our arts blog, Live Culture. The first is a music series penned by local experimental musician and 7D freelance reviewer Amelia Devoid called Playtime. In it, Devoid digs into some nooks and crannies of the local scene to shed light on progressive, provocative music that's likely flying under your radar. You can check that out every Friday.

The second is a comedy series called the Joke of the Week. This one consists of a joke. Every week. Creative title, no?

More specifically, each week we select a joke submitted by a local comedian to feature on the blog, as well as info about the comic and where you might catch him or her live next. The series debuted on Monday, October 3, with newcomer Katie Gillespie and a great little riff on sex and creemees. Look for a new joke every Monday. 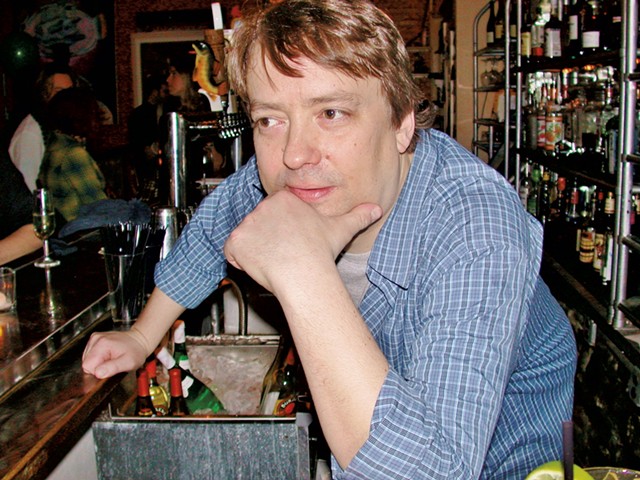 We close on a sad note this week with the passing of Mike McGonegal. He died unexpectedly on Saturday, October 1, at age 45. McGonegal's death has cut a wide, jagged swath through the heart of the Burlington community.

If you didn't know him, you probably know people who did. That's partly due to the one degree of separation that exists in Burlington. But it's also because he was one of those people who seemed to know everyone. There's a good chance he served you a drink or two over the years; McGonegal had been a friendly, familiar face behind local bars for as long as I can remember — most notably the Daily Planet and Three Needs. He was witty and warm and had a mischievous streak. He also had impeccable musical tastes, which made any bar he worked a damn good place to be.

Flock of Dimes, If You See Me, Say Yes