I'm starting this week's music news on a somber, bittersweet note. You may or may not know that, on New Year's Day 2019, longtime Seven Days staff photographer Matthew Thorsen died after a long struggle with cancer. Though it wasn't sudden, his death left a pretty big hole in the collective Seven Days heart. Prior to his death, Thorsen discussed living with cancer at length with our senior multimedia producer, Eva Sollberger, in an October 2018 installment of "Stuck in Vermont." In my opinion, it was one of the series' finest segments — out of more than 500 episodes to date.

To celebrate the photog's life and accomplishments, some of his friends and family are throwing an all-day eclectic music marathon called Thorever on Saturday, July 20, at a trio of Burlington locations. (Unsurprisingly, many participants are Seven Days employees.)

Thorsen's visionary eye and exceptional aesthetic sensibilities were appreciated not just by 7D staff and our readers but by the community at large. In fact, to honor the artist and his creative spirit, the City of Burlington recently renamed the alley by Red Square Thorsen Way. It's even Google-official.

When part one concludes, parts two and three of the multifaceted event simultaneously pick up (around 9 p.m.) at Nectar's and Club Metronome. Downstairs at Nectar's, the Everybody's Favorite Irish Drinking Songs Band make a rare non-St. Patrick's Day appearance. Thorsen was known for wailing on harmonica with this saucy crew. If you've never caught the slaphappy, sing-along group, it's well worth your time. Joining the kelly-green-clad outfit are country-punks Swillbillie, hard rockers Dino Bravo, hip-hop group the Hounds and platinum-haired badasses the Dirty Blondes.

Upstairs at Metronome, a solid lineup of DJs — including Big Dog, Fattie B, Disco Phantom and J Boom — will help you dance the night away.

Thanks for everything, Matt. Hope things are going well on whichever planet you've moved on to.

Anyone else like to dance while they shop? Am I the only person who gets a little bit funky when ABBA's "Dancing Queen" plays over the Trader Joe's sound system while I'm getting groceries? If you think the union of procuring goods while working that body is the best mashup ever, you might want to check out Conflagration on Sunday, July 21, at the Light Club Lamp Shop in Burlington.

Hosted by Battery Street Jeans proprietor Stu Sporko, aka DJ Radu, the event features art, apparel and other ephemera from a number of local designers under a sonic bath of trance, future bass and techno beats.

Hot comedy celebrities alert! Two major names are soon dropping by the Flynn MainStage. Miraculously, standup comedian Patton Oswalt's upcoming show on Wednesday, July 24, is not sold out. The Ratatouille and "A.P. Bio" star has become the ultimate comedic actor, making noteworthy guest appearances as well as holding down series-regular status on multiple projects simultaneously. And if you've never seen the extended cut of Oswalt's filibuster from NBC's "Parks and Recreation," you need to google that immediately.

And, just announced this week, "Big Mouth" cocreator Nick Kroll brings his Middle-Aged Boy Tour to the MainStage on Thursday, September 26. I find the comedian's animated coming-of-age series to be one of the truest and most empathetic depictions of puberty ever produced. Log into Netflix right now and start bingeing.

Waking Windows Portland, we hardly knew ye. The southern Maine offshoot of the annual Waking Windows music festival in Winooski is ending after a three-year run from 2015 to 2018. Waking Windows, the local production company behind the festivals, announced the news on social media.

"It was a really fun event," says WW cofounder Paddy Reagan, of the Portland festival. "But it's incredibly taxing to do a community-based fest when you don't live in that community."

Waking Windows (Winooski) started as a fringe music festival in 2010, slowly becoming a huge part of the Onion City's identity. Understandably, its founders wanted to spread the love. Along with the Portland arm, 2017 also saw a one-off iteration in Detroit, where fellow WW cofounder Nick Mavodones was living at the time.

Reagan tells Seven Days that the WW crew is already busy planning next year's Winooski event, which happens to be its 10th anniversary. No further details have been shared. But you know it's going to be epic. 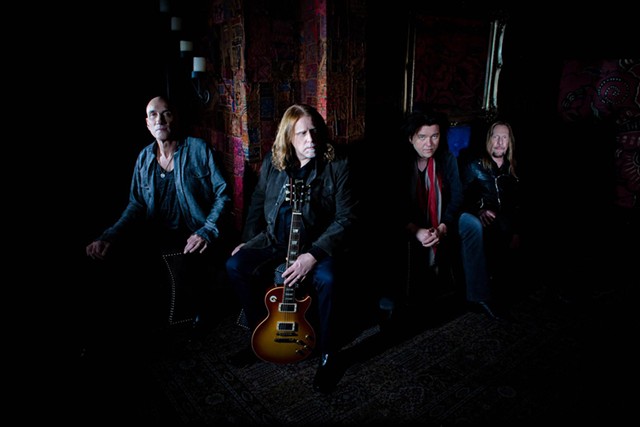 Speaking of GPN, make sure to vote in our Grand Point North Local Band Contest! Nominations have closed, and a link to the list of eligible contenders is up on our website. One lucky local artist or group will join the festival lineup and play the opening set on Saturday, September 14. As usual, those in the running are allowed and encouraged to campaign, but we draw the line at bribery. See the official rules and frequently asked questions for more on that.

Remember a few weeks ago when NPR interviewed Swale's Amanda Gustafson and Eric Olsen about the band's gut-wrenching entry to the network's annual Tiny Desk Contest? Turns out another non-winner to get singled out for its submission is making its Burlington debut this week. The Boston-based duo of vocalist/rapper Makel Clemmons and guitarist Alex Restivo, known as All the Time Always, plays the Light Club Lamp Shop on Friday, July 19. With hard-hitting truth-bomb lyrics and silky-smooth guitar, the group is definitely one to keep an eye on.