Soundbites: Brother to Brother; All Aboard 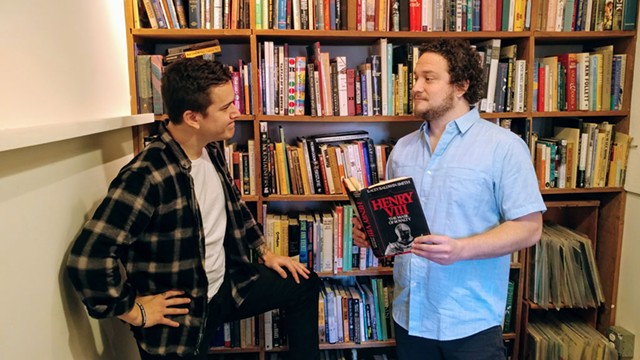 Quick show of hands: Who's excited for New Year's Eve? Despite my disdain for arbitrary edicts regarding when to party hearty — that is, most major holidays — I'm uncharacteristically jazzed about it this year. It's probably because of the high volume of kick-ass music happening that week. I don't want to get ahead of myself, because I'm planning a full rundown of year-end shenanigans in a few weeks. But there's something in particular that demands your immediate attention: SoundBrother.

You're probably aware that Kat Wright will close out 2017 with back-to-back hometown shows on Saturday and Sunday, December 30 and 31, at the Higher Ground Ballroom in South Burlington. Wright and her Indomitable Soul band, are more than capable of getting a party started without any openings acts. But, of course, the burden is not solely on the soulsters.

Higher Ground recently announced the local support acts for the two-night extravaganza. Opening duties on December 30 fall to Vermont veterans of blues the Eames Brothers Band. And, on the big night, NYE, it's indie-rock newcomers Julia Caesar and SoundBrother, the rockin' new incarnation of the DuPont Brothers.

Back in June, Zack DuPont told Seven Days that the fraternal duo's next record would be a "game changer" and that he and brother Sam DuPont planned to release it under a new name. Now that their first show as SoundBrother is little more than a month away, I decided to catch up with the brothers to find out what to expect from the new project.

"It's this weird pork loaf, and you cut slices of it off and fry it," said Sam. "People love it in [our home state of] Delaware. It's all about the scrapple sandwich."

"It's a dirty, dirty treat," said Zack. (I might add that both brothers can do a pitch-perfect Delaware accent. If you're not sure what that sounds like, google it — or ask a DuPont to demonstrate it for you.)

Given that the two have been performing as an acoustic folk duo for almost five years — and sometimes a trio with bassist Rob Morse, a longtime collaborator — it makes sense that they might be itching for a change.

"We've been playing around with the idea of doing a name change and a sonic remapping in certain ways," said Sam, noting that the initial discussion of stirring things up began almost two years ago.

"We love the folk thing, [and] we got really into how to make a duo show cool," said Zack. "But then we started getting a lot of outside influence coming in: rock bands, indie-rock bands, jazz musicians, improvisational musicians — whatever."

As those influences gradually trickled into the duo's songwriting, changes — such as the occasional use of electric guitar and effects pedals — began to augment their docile sound.

"I think we're just trying to evolve," Zack mused. "Not even trying — it's just happening. It makes a lot of sense. [We'll] keep all those lovely elements we've developed over the years — [like] the tight harmony singing — but definitely incorporate more rhythm."

Morse and drummer Dan Davine round out the new project's rhythm section.

The fate of the DuPont Brothers — the band — is not exactly clear at this time.

"In live settings [and] longer sets, we'll probably play some DuPont Brothers stuff," said Sam. "It's not about destroying that band. That music isn't dead. We'll dive back into it if a song fits into a set. It's really about having a really strong batch of songs and a polished sound in a band format."

The brothers say they boast a catalog of nearly 30 brand-new SoundBrother songs. They plan to start recording their new album in December.

Jokes aside, a high-profile show like their upcoming NYE gig is a perfect time to unleash this new iteration.

And, memo to Higher Ground: On the night of SoundBrother's debut, y'all should probably stock the green room with plenty of scrapple sandwiches.

Attention, passengers. The train is leaving the station — the Navytrain, that is. (I apologize for making such a corny joke. It was low-hanging fruit, and I'm better than that.) The acoustic folk-rock trio will strum its last chord on Thursday, November 30, at Nectar's in Burlington.

Navytrain burst onto the local scene in fall 2016. Their gorgeous song "Runaway" and its accompanying live video signaled that they were a noteworthy new band.

Navytrain's founding members — guitarist Cole Davidson, percussionist Ray Belanger and bassist Zebulon Carney — were seniors at the University of Vermont when they formed the group. As graduation approached at the end of the 2016-17 school year, the band's life expectancy was a looming question — particularly when Belanger left it after graduation.

"Drummers have come and gone since he left," Davidson writes in an email. "Naturally, the dynamic shifts with each newcomer. We were searching for the band's original feel, but, of course, that's impossible."

"Everyone is so different, so you have to adapt," he continues. "If adapting means changing the musical dynamic, then you're somewhere else entirely — especially if it's a three-piece band."

Now that the group is ending, Davidson is embarking on a solo career. He just released his first single, "Phenomena," along with a brooding music video.

"I wrote [the song] just around the time I started to see Navytrain's and my own future start to come into focus," he writes. "It's [about] how it's usually in your best interest to learn to accept change. A pretty generic theme, I know. But it was cathartic at the time."

Davidson says to expect more singles before a solo album surfaces. He's confident that it's the right decision to permanently park Navytrain in the metaphorical rail yard.

"Pushing on in a disingenuous way feels wrong — almost exploitative," he writes. "There's no bad blood or anything. It's just the next step."