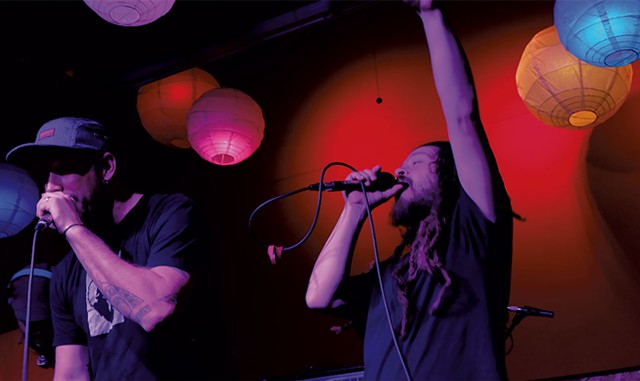 A chilly wind blew across the deck of the restaurant, a vanguard of autumn's arrival. Dustin Byerly sat upright in his chair across the table and zipped up his jacket. His dreadlocks were bound up beneath a cap, making him seem distinctly different from MC Sed One, Byerly's onstage nom de guerre with the Montpelier-based hip-hop group he cofounded, Boomslang.

"It's funny," he said, looking out across Burlington's South End. "Until Johnny got sick, I [had] never made another song with another producer in my life. It was basically a monogamous musical relationship."

The Johnny in question was producer and beat-maker extraordinaire Johnny Morris, aka JL, the other half of Boomslang. The two connected in 2004, and Byerly recalled that it didn't take long to discover their unique understanding of each another's talents. Morris had a treasure trove of beats, but no rappers. Byerly, who initially came out of the Goddard College poetry scene before gravitating toward hip-hop, was ready to rap.

The duo launched Boomslang in 2006.

"There were just so many dope hip-hop acts in the area," Byerly remembered of that time. "[The] Aztext, Learic, Fattie B. and the whole Burlington scene ... We just weren't as good as them then, truthfully. But we learned and came up by watching and listening to them. I went from worshipping those guys to being peers."

The duo released an eponymous debut in 2014, followed by the killer Attack the Vampire in 2017. JL's propulsive beats, culled from a massive vinyl collection, and Byerly's deft lyrical flow underpinned a duo constantly pushing its sound, straddling the line between classic boom bap-style hip-hop and more modern, slick production.

However, right after the release of Attack the Vampire, something started to seem off with Morris in the studio.

"He was missing lines, just like a second or two late. He was just sort of delayed in everything," Byerly explained. "We thought at first he [had] pinched a nerve or something."

The news was far more dire. Morris, a husband and father of three, was diagnosed with an aggressive form of brain cancer. Boomslang took an extended hiatus as he underwent immediate treatment.

Morris went into remission after surgery, recovering surprisingly well, according to Byerly. By early 2020, he felt well enough to make a new record, the forthcoming Boomslang III, which drops on October 14 on vinyl.

"We knew we were on borrowed time, though," Byerly admitted. "I asked Johnny, 'Yo, what do you want to do with this time? Do you want to try and make music as long as you can manage?' And it was a hard question, because you want to focus on your family, too. But he couldn't work. He couldn't drive. His kids were in school all day. So he was so psyched to make beats."

Full of purpose, Morris began pumping out four to five new beats a day, furiously laying the groundwork for music he knew would survive him. Though he and Byerly couldn't actually see one another due to the COVID-19 pandemic, the two knew they were making a monster of a record.

"These are some of Johnny's best beats," Byerly said. "When I first started showing friends the tracks, I'd always play them the instrumental versions right after, which, for a rapper, is kind of a weird thing! But that's how fucking great those beats are."

Boomslang III is indeed the group's strongest record to date, chock-full of bangers such as "Settle Down" and "Easy Comes (featuring Pro and DJ Kanga)." Morris layered the record in stacks and stacks of horn samples, adding a Motown and funk edge to the music. Byerly's delivery is as high-energy as ever, always on the front foot and hanging on the edge of the beat, aggressive and philosophical at once.

It's a record of which Byerly is immensely proud, especially because it will be the first — and last — Boomslang album pressed to vinyl.

"Johnny probably had 12,000 records, but none of them were our own," Byerly said. "So holding this record really means something to me."

Morris was never able to hold the record himself. On September 3, 2021, three days after turning 42, Morris died in his sleep in Montpelier.

"A lot of people mourn Johnny in different ways," Byerly told me. He smiled, a sad light in his eyes as he thought of his friend's legacy. "Not everyone has this solid tether to him that I do. I had the record to work on, and I have the beats he left me for the next record ... It's allowed me to say goodbye a lot slower because we're still communicating through the veil in some way."

A release party for Boomslang III, which is dedicated to the memory of Morris, is scheduled for Friday, October 14, at Positive Pie II in Montpelier. It will not be the final word from the band, however.

"Before he passed, Johnny and I had a frank talk," Byerly revealed. "He left me more than enough for the final album. We talked about what it would be like to make the record without him, which was fucking heavy, man, but it was a good talk."

So Boomslang will return one more time in the near future with Boomslang Forever, the final collaboration of Byerly and Morris. Past that, Byerly will continue branching out his solo career, working with producers such as Rico James and Pro, the latter a former MC and producer with the Aztext.

"At the end, Johnny was just doing such amazing work," Byerly said as we finished our drinks and the sun dipped behind the treeline. "Maybe it was the urgency. Maybe he was at his peak. I don't know. But he just hit such a stride. It's going to be hard to top Boomslang III, but he left with me the tools to really try."

He took a deep breath, pausing as he realized he was discussing his group's coda.

"It's sort of surreal to talk about it so matter-of-factly," he said. "But the reality is that the project was ending whether I wanted it to or not. So the wise, prudent thing is to go out well, with style. Close the project out on the highest possible note. And that's exactly what Johnny would have wanted."

Recent Burlington transplant Ali McGuirk just released her full-length debut record, Til It's Gone, on Signature Sounds Recordings. The formerly Boston-based singer-songwriter and guitarist is hitting the road for a month of hard touring to support the new record. Before she puts wheels to pavement, she rang me up to talk about finally going all in as a professional musician.

"For most of my career, I kind of considered music a really serious hobby," McGuirk said. "I resisted going full professional because I thought it might ruin the whole thing for me. It was for protection, and it had its benefits. But the new record is me moving past those fears and accepting that this is who I am. This is what I do."

Largely recorded in Los Angeles and featuring ace session musicians including Little Feat guitarist Fred Tackett, Til It's Gone is a big step up from McGuirk. The record zips from neo soul to pop to R&B to rock, sometimes in the same song, resulting in a broader take than her previous jazz-influenced work.

"Recording with this caliber of musicians was really validating, actually," McGuirk said. "Seeing these guys who have been on so many records I love, getting really into music I wrote, was mind-blowing. Feeling their respect and how they treated me like a peer was awesome."

McGuirk's tour will stop back in her adopted home of Vermont for a show on Friday, October 14, at Higher Ground in South Burlington. Having only relocated to the Green Mountains last year, McGuirk is somewhat surprised that the show truly does feel like a homecoming gig.

"Honestly, every show I do in Burlington is extra special to me right now because I'm building a community for myself," she said. "I've felt so welcomed by this music scene and community since I came here. It's a good place for creatives. It's a restorative place."

The contrast of laying deeper roots in Vermont while pushing her music career beyond its borders is not lost on McGuirk.

"Being here and taking on this identity, accepting myself as a singer, as a creative person, I can feel the difference," she asserted. "I'm feeling at home, physically and within myself."