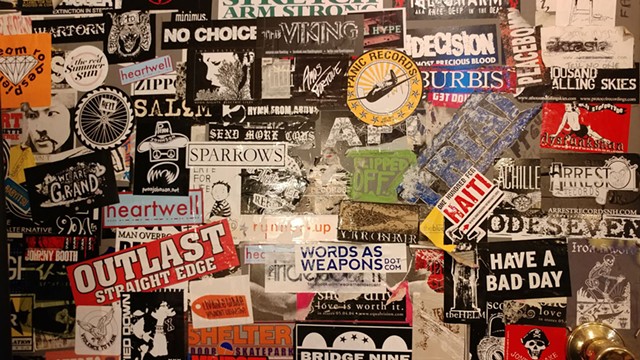 Have you all ever noticed that sometimes I start this column with a friendly greeting and other times I just jump right into whatever's going on? That's because I can never make up my mind if I want a friendly greeting to be a permanent fixture of this column. Just about every week, as I sit down to write it, I debate which way to go. I suppose I'm bucking tradition this week by being meta about it all. Let's try a friendly greeting for today's installment.

Howdy, folks! I hope you're all recovering nicely from this past weekend. Whether you hopped 'til you dropped at the South End Art Hop, shined this little light of yours at various Vermont Pride events or got down like nobody's business at the Otis Mountain Get Down, I'm sure you're all looking forward to a few days of peace and quiet.

You know what's always a nice place to be peaceful and quiet? A museum. And speaking of museums (I warned you), Vermont nonprofit music archive, radio station and general hub of music-minded happenings Big Heavy World just unveiled its new permanent tiny museum at its new-ish Howard Street location.

Temporarily housed at the Vermont History Museum in Montpelier, the modest collection showcases a number of artifacts from the 802 music scene, such as the actual main interior office door from fabled Queen City rock club 242 Main. Plastered in stickers, the piece rests right next to an engaging interactive exhibit also related to the bygone venue.

Utilizing a touch screen, users can watch brief interview clips from local filmmaker Bill Simmon's forthcoming documentary No Stage Diving: The Story of 242 Main. The former punk club was a vital force and creative incubator in Burlington's music scene. It closed in 2016 when all tenants from the building, Memorial Auditorium, were ordered to vacate because of its structural issues. In the clips, people from all over Burlington's creative scene reminisce about 242, discussing what made it special and how it affected them. No release date has been set for the film.

Other interesting attractions at the pocket exhibition include a metal filing cabinet that was bashed to smithereens during a circa 2000 chainsaws.and.children show at Club Metronome, a virtual reality drop-in on a broadcast of BHW's weekly live music radio program "Rocket Shop Live," as well as another interactive setup featuring selected photos from Matthew Thorsen, Seven Days' beloved staff photographer who died on New Year's Day 2019.

The museum isn't going anywhere, so you have plenty of time to check it out.

Sound the alarm: The first huge concert of 2020 has been announced! The stateliest band Columbia University ever graduated, Vampire Weekend, are set to perform on Thursday, May 28, at the Champlain Valley Exposition in Essex Junction. To the best of my knowledge — as well as that of Higher Ground Presents' Alex Crothers — this is the first time the indie-rock group has performed in the state. Tickets go on sale this Friday, September 13.

The band released its long-awaited fourth studio album, Father of the Bride, earlier this year ... and I still haven't listened to it! I wouldn't call myself a Vampire Weekend super fan or anything, but I've done my fair share of listening and was quite taken by their first three records. I worried a little bit when original member Rostam Batmanglij left the band in 2016, since he was the group's main producer. Maybe that's why I've put off listening to the new one.

I hope this show sells well, because it would be great to be able to snag more artists of this vein and caliber. Vermonters often miss out on tours because we don't have a dedicated concert venue that can accommodate shows of this magnitude. Maybe if this one does well, other bands will follow suit.

Speaking of Higher Ground Presents, the promoter teams up with Grace Potter this weekend for the Grand Point North music festival, aka the final word on summer. Say goodbye to the season as you watch the sun dip into the Adirondacks at Burlington's Waterfront Park on Saturday and Sunday, September 14 and 15.

This year's lineup is pretty fantastic. Potter, of course, headlines both nights of the festival. Of particular note on 2019's bill: guitar hero Lucy Dacus, soul-infused alternative rockers Rainbow Kitten Surprise, and chameleonic group Lucius, who completely reinvented themselves between 2016, when I saw them, and 2018.

The 2016 show jived with the punchy pop-Americana heard on their sophomore record Good Grief. But two years later, they'd stripped everything down to a warm, '70s soft-rock/country sound — like the material on their 2018 album, Nudes. This time around, the band continues the sound of its Nudes tour, with a string trio in tow.

I have pretty much only one complaint about Grand Point North. I'm sure this was an unfortunate oversight, but, last year, I could not find a single cup of coffee within the festival's extensive selection of food and beverage vendors. Indeed, I was hoping for iced coffee, but I would've settled for hot. I think I asked just about every vendor if they had any and found zilch. For those of us who don't really do the alcohol thing, we'd love some rocket fuel this time around.

From Anna and the Apocalypse, "Turning My Life Around"