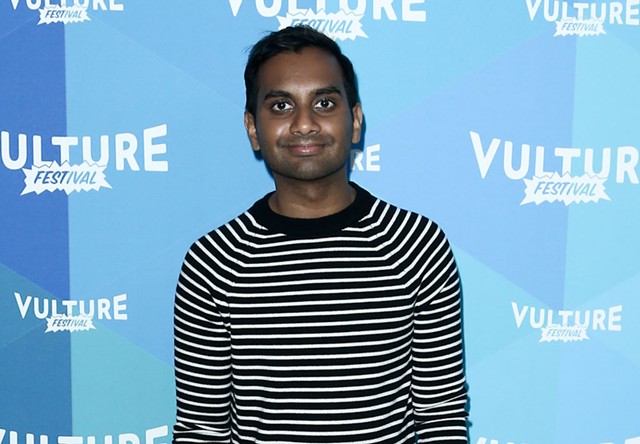 In case you somehow missed this week's biggest bit of local entertainment news: Aziz Ansari is coming to Burlington. Specifically, the comedian plays two shows at the Flynn MainStage on Thursday, September 27. Higher Ground Presents, which is presenting Ansari, added the second show after the first sold out almost immediately. It wouldn't surprise anyone if that second show does the same by the time this paper hits newsstands.

Before January of this year, I bet the 35-year-old comedian's presence in the Queen City would've been met with universal glee. After two beautiful seasons of his Netflix series "Master of None," Ansari was regarded as one of the most important voices of his generation. But I imagine his impending visit is giving some folks serious heartburn.

In case you also missed this: Ansari was accused of sexual misconduct in mid-January. Since then, his case was kicked around the court of public opinion until society deemed it a mistrial. Like many of the men outed in the #MeToo movement, the comedian has remained out of the public eye until his recent string of "comeback" appearances.

The ethically questionable article that thrust Ansari under the microscope was published on lifestyle website Babe.net. It told an account of a young woman called Grace who went on a date with the former costar of "Parks and Recreation." She called it "the worst night of my life." However, the story's mechanics made a mockery of journalistic integrity by mixing in tabloid flair and editorializing with fact-based reporting. (This is the same website that publishes pieces like "It's Time Someone Said It: Adele Is the Absolute Worst," a fat-shaming takedown of the much-loved artist.) The volatile combination raised the hackles of journalists and readers alike and called into question the story's validity.

Furthermore, deep divisions emerged regarding whether Ansari was guilty of sexual assault — or of anything at all. Many thought of the tale as a grossly familiar bad date. New York Magazine's website the Cut put together a comprehensive list of hot takes a couple of days after the original story was published. Read them all if you want your head to explode.

Personally, I've been all over the place with this saga. I'll admit that, at first, I was outraged and defensive. I actually had no idea how much I'd grown to love Ansari as an entertainer until Grace's story was published. After I read it, I felt protective of the artist who'd made me practically pee my pants as the shallow but sweet Tom Haverford from Pawnee, Ind., and the way he abbreviates food items. (Appetizers are apps, desserts are 'zerts and chicken parmigiana is chicky chicky parm parm.)

I talked the story to death with colleagues, friends and family. By the end, here's where I landed: If the story is accurate, neither Ansari nor Grace were good communicators that night, or good at reading each other's intentions. However, that lack of awareness only resulted in one person being hurt: Grace. Therefore, we have to consider her point of view more carefully than his.

Some of you might be plotting my demise for using the word "if" just now, and for holding my somewhat mixed opinion. I know the current sentiment is to believe women, full stop. There's a hashtag for it. And I understand why it's important. But I just can't blindly accept anything anyone says, and I think I have a pretty damn good reason why.

I was raised as a born-again Christian. I had religion — presented as infallible, absolute truth — crammed down my throat from day one. Religious leaders scared me into accepting Jesus as my Lord and Savior as a means of staving off the fires of Hell. #BelievetheBible.

But then, when I was approximately 14 years old, I realized that I wasn't, um, exactly like all of the other boys in my Sunday school class. It took me a hot minute, but I eventually figured out that I'm gay. This aha moment showed me that my true self was in conflict with my family's religion, the one that said homosexuality was wrong and a choice. But that realization ultimately led me to the epiphany that religion is the choice, not being gay. Ever since then, I've been a true skeptic. And I ain't gonna turn back into a true believer.

But let's get back to the issue at hand. Ansari apologists offered this argument: What he did wasn't assault, so everyone can get off his back. OK, that might be true — but it doesn't mean what transpired was OK. You can behave shittily and deserve shaming even if you didn't assault someone.

And that's sort of where we are with Ansari's impending return. The big question on my mind is: Will he address the controversy? Earlier this year I thought, Maybe the silver lining here is that it'll lead Aziz to write the best thing he's ever written. Maybe he'll write a one-man show that not only addresses what he did but also addresses the toxicity that exists in the modern dating landscape. (I'm single, and let me tell you, dating in 2018 fucking sucks.)

Last month, Louis C.K. set the perfect example of what not to do when he made a surprise appearance at the Comedy Cellar in New York City. He did a tight 15 and acted like it was just another day at the office. Except that it wasn't. The onslaught of think pieces that landed after C.K.'s set pretty much universally agreed that he fucked up and should lose any remaining respect folks still held. Then again, there's no ambiguity about what C.K. did; he already admitted to his predatory, disgusting acts. So it was probably easier for critics to come down hard on him for his lapse in judgment.

Ansari apologized to Grace because she was hurt, but he also denied sexually assaulting her. Perhaps the ambiguity of the situation is why critics haven't made as big a deal out of his return as they did C.K.'s.

According to Vulture's Ryan Glasspiegel, "[Ansari's] new material in this post-#MeToo context was more or less what it looked like before." So I guess that means we shouldn't expect any acknowledgment from the comedian regarding the controversy. But maybe he'll surprise us.

I fucking hope so.

Bill Haley & His Comets, "Rock Around the Clock"

Duran Duran, "Hold Back the Rain"