It's been a long, winding trip since the days of gigging across Burlington for Alex Toth. The University of Vermont grad went from playing funk in John Brown's Body and jazz with the Lazybirds to forming art-pop act Rubblebucket and later collaborating with artists such as Kimbra and Cuddle Magic.

Though Toth and his Rubblebucket cofounder Kalmia Traver eventually separated as a couple, the band continues to thrive. The two have pursued solo careers, as well: Traver formed Kalbells, and Toth started his own project, aptly titled Toth. He released Practice Magic and Seek Professional Help When Necessary in 2019, a breakup record that is equal parts raw pain and tender reflection.

You and Me and Everything followed in April of this year, a record that draped a shimmering coat of sunshine over the reflections of Practice Magic. Though still full of clever rhythms and art-rock experiments, Toth's latest LP seems to possess an undercurrent of quiet satisfaction, if not contentment.

The album's warmth is tempered by an EP that Toth released in October, a darker set of songs recorded during the same sessions as You and Me. Titled simply DEATH EP, the five-track recording chronicles the struggle that Toth — a recovering alcoholic — had when dealing with a family member's addiction.

"I'm eight years sober today, actually," Toth told me by phone while waiting to get his tour van fixed in Nashville, Tenn. "So writing the DEATH EP came quite easily. The actual experience was painful, though."

Toth recalled his efforts to help his relative through their addiction. "I talked with them more in the last eight months of their life than I had my whole life prior to that," he said. "So I grew very close and tried to help ... but, yeah, it was too late."

That family member died the day after the Practice Magic release party. For Toth, seeing someone succumb to a disease with which he had struggled for so long was jarring. The songs on DEATH EP express Toth's pain and confusion, but they also reveal the silver lining he discovered.

"It solidified how lucky I feel to have made it to sobriety," he admitted, "in all the ways, really. Other people I know in recovery, they struggle to find their creativity again at first. It can take a little to recalibrate."

In his first month sober, Toth wrote 21 songs in 21 days.

"I realized that revealing my demons, as opposed to hiding them with alcohol, gave me plenty to work with as a songwriter," he said.

Clarity brought prolificness, and Toth's projects began to pile up. But as he finished recording You and Me and DEATH EP, the pandemic shut everything down.

With tours and recording sessions canceled, Toth adapted quickly. He worked on mixing and mastering the records he had, and he collaborated with Hannah Mohan of Northampton, Mass., indie-rock band And the Kids. Yet the longer the lockdown continued, the more not playing live music got to him.

"The way I understand music is as a live experience, human to human," Toth explained. "There's something about playing live that's like climbing a mountain. You're pushing every faculty to the extreme, but it's just such a dream to play these massive shows, you know? So to go almost two years cut off from that energy has been tough."

Now Toth are back on the road, opening about a month's worth of shows for Dr. Dog before headlining their own Northeast tour, including a stop at the Higher Ground Showcase Lounge in South Burlington this Tuesday, November 30. While Toth loves the polyrhythmic power of Rubblebucket, the songwriter feels that his three-piece is more of a direct line to his heart and brain, particularly because he's the main singer.

"Playing in this trio is almost effortless," he said. "It offers freedom of movement as a musician, and you can explore. I love that aspect of it. The band is more boiled down to my essence than other projects."

He's also excited to bring his band back to Burlington, a city that's never far from his thoughts.

"I still pop up to Burlington whenever I can," he said. He recalled a pandemic bike ride with his dad, songwriter Henry Jamison, calling it "the loveliest excursion.

"The town just means so much to me," Toth continued. "So much of who I am as a musician was formed up there."

For the homecoming show, Toth will draw from each of his albums, which together form an emotional arc.

"Grief is grief; loss is loss," Toth proclaimed. "We all experience these things in microwaves and macro waves. So a thing I was feeling in 2016 when Kal and I broke up still applies today, but in a different way, you know?

"There was a time when the songs on Practice Magic were too raw," he said. "So it's nice to play them now and have that distance. The same goes for all my work: They evolve with my emotions." 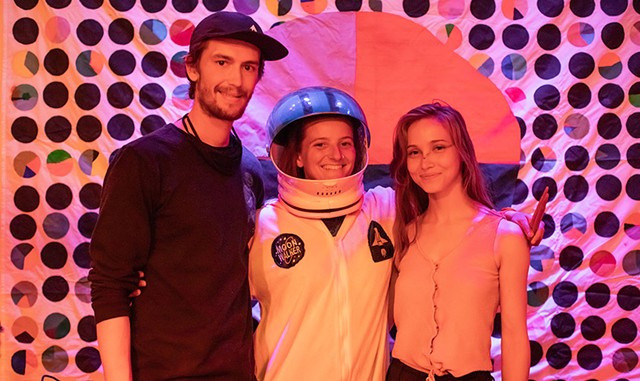 Burlington's Father Figuer are back with a new single. Titled "Ghost," the song is a dreamy, shoegazing piece of music, full of slow-burn menace and almost dissociative detachment. With a beat that seems like it could fall apart at any moment and distorted guitars stumbling over the chords like a drunkard walking home from the bar, "Ghost" is an eerie slice of indie rock.

It is the second single from the band's forthcoming sophomore LP, Jack of All Fruits, following the Halloween release of "Garden."

In an email to Seven Days, Father Figuer co-vocalist/guitarist Erin White described the inspiration behind the song.

"This project as a whole confronts the accumulated versions of self," she wrote. "I see myself standing in a room with a decade's worth of accumulated artwork haphazardly pasted on the walls around me and realizing there is nowhere left for my brush to land. The space exhausted. I have to leave them behind in order to create new. This farewell is a happy one, and a tribute to those who helped me to build it."

Jack of All Fruits is the follow-up to the band's excellent 2020 debut, Transitions. Judging by the two advance singles, it's safe to say we can expect another record full of gorgeous, interwoven guitar lines; My Bloody Valentine-like excursions into post-rock; and washed-out, dreamlike vocals from White and co-singer/guitarist Caroline Franks.

Check out the band's latest at fatherfiguerband.bandcamp.com.

It's been a tough year for Burlington in many ways. For one, we keep losing some of the best members of our community far too young.

Jason Pratt passed away earlier this month after a lengthy battle with multiple sclerosis. I never knew Jason personally; I just played some shows for which he ran sound. But I saw his band Dysfunkshun play a few times, right after I moved to Burlington in 2001.

Despite my love of Faith No More and the Deftones, I generally loathe the combination of rap and rock. It so rarely does anything for me. So when the bassist in my band at the time urged me to check out "local heavy royalty," as he called Dysfunkshun, I wasn't too enthusiastic.

The band was a force, though. Its members ripped through their punk-rap set with aplomb, and it was hard not to notice the passion and talent with which Pratt played his guitar. I became a fan, so naturally they broke up the following year.

Pratt's good friend and former bandmate Richard Bailey reflected on Pratt's effect on his life in an email to me last week.

"He was an intelligent and caring friend," Bailey wrote. "The band didn't know we were only running on six cylinders until Jason showed us what a V8 sounded like. I always felt like Dysfunkshun gained a great guitarist in Jason, while I gained a brother."

Dysfunkshun are an important piece of Burlington's music history. Pratt is part of the city's history now, too, and new generations of Burlington musicians should know of him, lest we forget. Rest in peace, Jason.