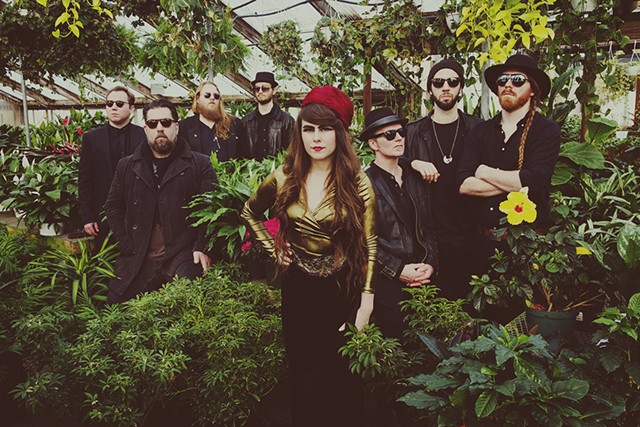 If it seems like it's been a hot minute since we've heard from Kat Wright and the Indomitable Soul Band, well, it has. The band hasn't played in Burlington since its New Year's Eve gig at the Flynn MainStage. It might seem a little strange for one of Vermont's most popular bands to take a three-month hiatus from playing in their hometown. But absence, as they say, makes the heart grow fonder. And when it comes to gigging, absence is also sometimes a savvy move.

Wright and co. will return to Burlington this Friday, April 1. And they're playing the grandest rock stage in the land, the Higher Ground Ballroom. This will be their first time headlining the Ballroom, which is a major step for a local band. Lots of locals can pack Radio Bean or the Monkey House. Several others can crush Nectar's or ArtsRiot. But only a handful can fill the area's marquee room. And when you do, it's a big deal.

One of the worst mistakes bands can make is oversaturating their hometown market. They need to play frequently enough to cultivate a following, but gig too much, and they run the risk of those shows becoming less special for fans. It's a fine balance to strike, but it's critical for those looking to level up, which certainly includes the Indomitable Soul Band.

So, part of the reason they've sat out the winter in Burlington is to build anticipation for what figures to be their biggest local show to date. In the meantime, the band has been touring regionally and building followings in cities all over the Northeast. And that's not all.

Earlier in March, the ISB spent time in New York City recording their debut full-length album at Studio G with producer and engineer Joel Hamilton. Hamilton is an in-demand producer who has worked with the likes of Tom Waits, Iggy Pop, Jolie Holland, Elvis Costello and Sparklehorse, to name-drop a few. In other words, he's the real deal.

It's interesting that Wright's band has been as successful as it is, with only a 2013 EP to its credit. Perhaps that's simply a sign of the times. But it could also be because the Indomitable Soul Band has always been a live act first. They were born of a weekly residency playing soul covers at Radio Bean and began building a wider following through a string of increasingly higher-profile gigs — Burlington Discover Jazz Festival, Grand Point North, the Precipice, etc.

"Making a full-length record has been a very long time coming for our group," writes Wright in a recent email. "But, in a lot of ways, this was the soonest it made sense for us."

The singer cites several personnel changes over the years as a reason it's taken so long to record a full-length. Only now does Wright feel like band has settled on an ideal lineup.

"The additions of Bob Wagner (guitar) and Ezra Oklan (drums) have been huge guiding forces musically," she writes, adding that Wagner has penned a number of songs for the band that now make up a big chunk of the band's repertoire. "His spirit of spunk and camaraderie were desperately needed when he joined the group and have made us all gel better as friends and as performers and, really, as a family," Wright continues. "He's a total badass in every way, and he's professional and dedicated. We needed that."

She credits Oklan, the newest member of the band, with trimming the fat.

"He's worked with us a lot on simplifying our music," she writes. "Or better yet, defining our music, stripping away the excess and getting to the heart ... being a slave to 'the song.'"

Actually, to 12 songs. The new record, which is due out this summer, is composed of six brand-new songs and six that the band has been playing for a while — including one redux from the EP. Wright says the band spent a lot of time reworking material, including playing with tempo and feel, and experimenting. "We kind of massaged the songs into places that felt the most authentic," she explains.

The band's 2013 debut EP was a solid effort and a passable companion to its electric live shows. Still, in some ways, it felt like the band played it a little too straight, too safe. If you listen to that EP and compare it to what the band sounds like now, it's like hearing two different groups — which is actually kind of the case.

"When we made the EP, we really were just winging it and doing what we knew how to do at that time," Wright admits. "We didn't take any chances on the EP, and we didn't have a mentor. It was just straight-up us, exactly how we sounded at the time. We've matured a lot as a band since then."

Wright has matured as a singer, too. She says she's worked immensely on her technique, her tone, delivery and phrasing. She says those improvements gave her the confidence to take risks in the studio she wouldn't have before.

Asked specifically to describe how the new album will be different from the EP, Wright says the tone will be less overtly jazz and vintage R&B, though those elements are still there.

"It's like a soul pizza," she writes. "Like the way you'd order a white pizza or a red pizza, the base is soul. And the toppings are pop, rock and R&B, with a sprinkle of jazz."

"It still totally sounds like us," Wright assures. "But it's a more imaginative and magical version of us."

It's also a hungrier version, apparently in more ways than one.

Zipping Up the Pants

Before we draw this week's column to a close, I want to take a moment to thank everyone who made it out last Saturday to the premiere of Bill Simmon's documentary High Water Mark: The Rise & Fall of the Pants. It was a very special night, on so many levels.

For starters, the movie is fantastic. If you were here during the reign of the Pants in the 1990s, I almost guarantee you'll get misty-eyed watching it. It's a loving throwback to a phenomenal period of Burlington rock and a touching homage to a great band.

If you weren't here then, see it anyway. Simmon's film is relatable to anyone who has ever loved an underground band that never quite made it. It's a universal story, and I think you'll find it relevant and entertaining whether you know the Pants' music or not. And I'm not saying that just because I'm in the film. I really believe it.

Of course, what a treat to hear Tom Lawson sing those old songs again — doubly so backed by Swale. It was also incredible to hear folks like James Kochalka, Craig Mitchell, Ryan Ober, Ryan Miller, Casey Rae, Jason Cooley, Heloise Williams and others do renditions of their favorite Pants tunes. Miller, by the way, was a highlight of the night — literally, since he was wearing Christmas lights head to toe. He might have been second only to Swale vocalist-keyboardist Amanda Gustafson's heart-wrenching take on "Both Eyes Closed."

It was also cool to hear short sets by 1990s bands Construction Joe and Chainsaws of Babylon. If you squinted — or were drunk enough ... ahem — you might almost have believed it was 1997 at Club Toast all over again. What a night.

Explosions in the Sky, The Wilderness