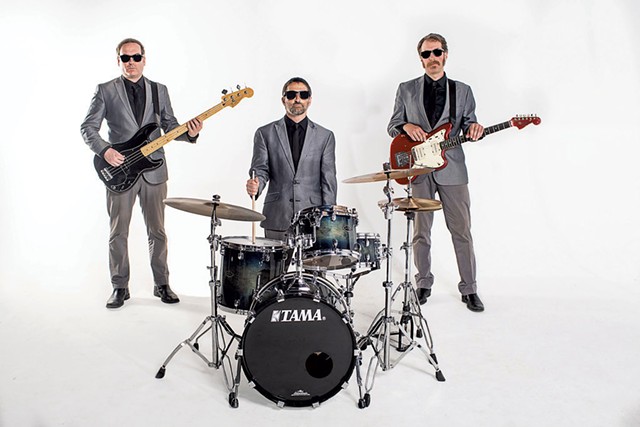 Some records take a little extra time to hit. It's different for everyone, but there have been countless times when I've picked up an album, thought it was total shit and discarded it. Then, lo and behold, six months later I love it. I was definitely one of the people who wrote off MGMT's sophomore record, Congratulations, only to become obsessed with it three years later.

And isn't that beautiful? Your experience of a song or album can become completely altered in your mind without any real change other than the passage of time. The song remains the same, but you've changed, even if just a little.

Now, that isn't exactly what happened with my take on the High Breaks' record Smirk of the Dolphin. Let me 'splain.

Flash back to one year ago: I received an innocuous email. "Hagen has made a concept record about a man falling in love with a dolphin," it read.

Matt Hagen being Matt Hagen, I didn't register much surprise. The ever-hustling local musician always seems to have a new project in his back pocket. And more often than not, that project is gloriously weird. Falling in love with a dolphin? Sure, why not? Besides, if you watch the dolphin shenanigans on the Amazon series "The Boys," you might find that an aquatic love affair set to surf rock is pretty tame.

Like the dutiful music writer I am, I listened to Smirk of the Dolphin a few times and, predictably, enjoyed it quite a bit. I've always been a fan of the High Breaks — what's not to love about surf-rock bands in landlocked states? Besides, the record was full of musical touches the band hadn't really delved into before: vibraphones, theremins, saxophones and pedal steel. It's a fully realized concept record, suffused with intention and songwriting that is tongue-in-cheek one moment and touching and dark the next.

So, why didn't we cover it? Well, the story on which Hagen based Smirk of the Dolphin is real and really fucked-up.

Here goes: A man named Malcolm Brenner fell in love with a bottlenose dolphin named Dolly while working at a water park in Sarasota, Fla., in the late 1970s. Brenner published a novel in 2009 loosely based on his experiences called Wet Goddess (oof). He then starred in a 2015 documentary called Dolphin Lover. In that film, Brenner claimed that Dolly (who, I will remind you, was a dolphin) seduced him and that the two had a sexual and romantic relationship for a year.

Florida being Florida, bestiality wasn't illegal there until 2011, so Brenner didn't face criminal charges once his status as a zoophile was revealed. Brenner, a former journalist, has framed the encounter as a love affair and has since become a champion for releasing dolphins from captivity. But ... yeah, you did it with a dolphin, man. No matter how you justify it, that's animal abuse.

So, as the matter got murkier and murkier and other albums started flying into the office, any coverage of Smirk of the Dolphin was shelved. And the more I read about Brenner, the less I felt like listening to a record about his story.

Months passed, and I forgot all about it.

Flash forward to last summer, when the Higher Ground Backside 405 series was getting going. I was psyched to see the High Breaks on the schedule and noted that the show would be a full-album performance of Smirk of the Dolphin, complete with special guests and a custom beer brewed by Foam Brewers to mark the event.

The record was even better live. The High Breaks were crisp and tight as their Dick Dale-flavored compositions echoed throughout Burlington's South End on a gorgeous summer night. "Sea Spray" had the audience dancing as drummer Todd Gevry dropped a frenetic beat and locked in with bassist Kevin Lynam. Hagen shredded on his Fender Jazzmaster. "Love's Twilight" bopped along, and the band, as always, was a strong instrumental force.

"Ohio Was Never Meant for Me" was even more arresting live than on record. The crowd grew quiet as Hagen stepped to the microphone and sang "I've been ocean bound since I was three / I'm never going back to a landlocked life."

By the time "You Never Came Up for Air" closed the set, there were actual tears on some faces in the crowd, which would have shocked me only an hour earlier. The protagonist of the tale, having achieved his dream of becoming a successful surf-rock guitarist, realizes he has to leave his muse, the dolphin, behind. Despondent, the dolphin disappears into the sea, never to be seen again.

I was shook by how emotional the record felt live. Despite being surf-rock about a man loving a dolphin, the songs hit with true force. Did I still look around occasionally and mutter, "I mean, he had sex with a dolphin, people"? Yes, multiple times.

Not long after the show, I had a drink with Hagen and laid out why I hadn't written about the record, which had been out for six months: It was about Brenner and his book.

"Yeah, but it's not actually about him," Hagen pointed out. "His story sent me in that direction — it certainly inspired me — but the record is its own tale," he explained. "Yeah, it has its dark moments, but it's really about a guy who finds a muse that helps him realize his dream. But then he has to leave that muse behind, which is the kind of story that fascinates me as a songwriter."

Life does have a tendency to be stranger than fiction, and it certainly is in this case. I'm still not going to pick up a copy of Wet Goddess anytime soon, but I'm glad I caught the live version of Smirk of the Dolphin and gave it another chance. 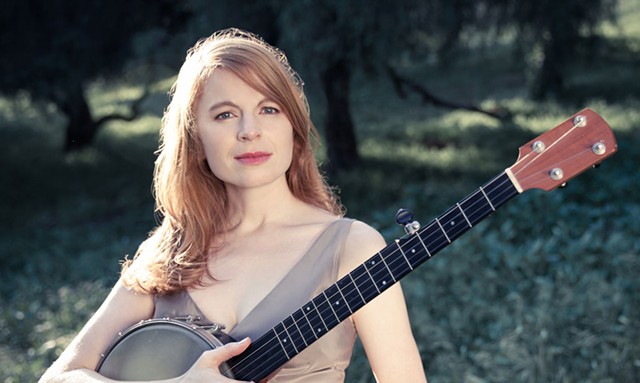 Some of Vermont's best musicians and entertainers are dropping new singles this month, all with accompanying music videos. As someone raised on a diet of MTV, VH1 and MuchMusic, I love seeing bands in the local scene produce videos, no matter the budget. Keep 'em coming!

First up is an international tag-team effort between Vermonter Moira Smiley (Tune-Yards) and English French singer-songwriter Piers Faccini (Ben Harper, Camille) titled "Meeting Is Over." The song features Smiley on the banjo and vocals and Faccini on voice, guitar and West African guembri. Irish multi-instrumentalist Seamus Egan (Solas) joins in on the song, which features some dazzling harmony work.

"The song celebrates the cycle of life and death," Smiley wrote by email. "It reflects on goodbyes with those we love the most, the ebb and flow of togetherness that life presents."

Egan, Smiley's partner, shot the video for "Meeting Is Over," inspired by the films Roma and Babette's Feast. Look closely at the video, filmed along Lake Champlain, and you'll see a slew of Vermont artists making cameos, including musician Sadie Danforth-Brightman and author Deborah Felmeth.

Local lads turned big deal A2VT also have a new single and video out. The formerly Winooski-based hip-hop collective, fresh from reaching the finals of the 2021 International Songwriting Competition for "I'm a Soul Survivor," have released "One Time Only." A high-energy dancehall-flavored pop song full of good vibes, the track is mostly sung in English with a bridge sung in Somali dialect Maay Maay.

Like Smiley, A2VT shot their video in their home state. The clip was directed by Media Factory's Ken French and Jude Domski.

"We really wanted to get the video done quickly," said French of the outdoor shoot, "before the weather turned colder, which in Vermont can happen really fast."

"One Time Only" is the latest single from A2VT's latest record, Twenty Infinity.

Finally, the House of LeMay are back with another banger. Amber LeMay has released "Sweaty Balls," an anthem to observing, um, well, sweaty balls in the hot summer days at their rural retreat Beaver Pond. The press release that accompanied the single revealed that "people are going nuts for this song."

Award-winning director Jack Quint shot the video, which includes members of the Beaver Pond Players, including Lucy Belle LeMay; cousins Crystal, Bones and Craig; and Rusty Peen. You can catch it, as well as a making-of video, on YouTube.