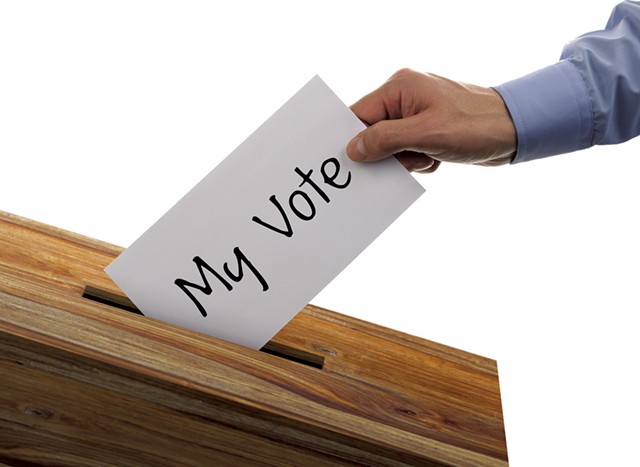 It's come to my attention that some folks don't fully comprehend democracy. The democratic process to which I'm referring is Seven Days' annual Grand Point North Local Band Contest. As always, our readers choose the nominees and winner. The contest's champion is awarded the highly coveted task of opening the two-day festival, which spans Saturday and Sunday, September 14 and 15, at Burlington's Waterfront Park. It's a big deal, and the bands and artists who really want it campaign their asses off. Just ask this year's winner, Ben Fuller, and runner-up, the Kingdom All Stars.

A reader recently reached out to express outrage that jam band Twiddle were included as a nominee. They claimed that we "should have known there was no way in hell Twiddle would appear at GPN" if they were to win the contest.

Curiously, this person didn't seem to be outraged at Twiddle's inclusion because they dislike the band. Rather, they found the inclusion insulting and seemed to be taking offense on behalf of the jam-tastic outfit. They made sure to let us know that "Twiddle would never appear at GPN," as well as tossing out a claim that "Twiddle doesn't book bigger names than themselves ... to sell tickets to their own festival." They referred to Twiddle's two-day festival Tumble Down, which took over Burlington's Waterfront Park last Friday and Saturday. And somehow, in the same breath, they managed to throw shade at Grace Potter for booking Jackson Browne and other big stars at GPN.

First of all, let's deal with what would happen if Twiddle somehow, without trying, won the contest.

"I would love to see that, [and] if it helps Grace sell tickets, that's great," says the band's manager, Kevin Rondeau. But he also notes a "laundry list of reasons why Twiddle shouldn't do that," specifically oversaturation in their home market and logistical concerns.

"But I'm open to any and all possibilities," said Rondeau.

The thing is, Twiddle have their hands full. Aside from touring like mad and hosting one of the biggest festivals in the area, the band's members operate the White Light Foundation, a charity that supports various nonprofits in the area. Fundraising efforts from Tumble Down, including proceeds from Fiddlehead Brewing's Twiddle-inspired beer and a disc-golf tournament, will be distributed among the Howard Center, the Turning Point Center of Chittenden County and the Neonatal Intensive Care Unit at University of Vermont Medical Center. With so much of their own stuff going on, a quickie set on a Saturday afternoon isn't high on their to-do list.

But anyway, back to my rant!

The reader suggested that Seven Days employees should comb through the nominees and "not waste time and space with pie in the sky" bands and artists. Why? To presumably whittle the pool down to only musicians that we think could actually win. Mind you, this was after I explained to the person that our readers choose the nominees and winners in all of our voting contests. (Also, why does this person care about Seven Days employees' time, not to mention how we manage space in our publications? Are these behind-the-scenes details keeping any of you up at night? I didn't think so.)

I really hope the person who emailed me isn't in charge of any local elections. Can you imagine them poring over ballots, looking at write-in votes and saying, "Oh, there's no way this person will win. Let's toss that one out."

One more time, for the record: The nominees and winners of the GPN contest are democratically chosen by Seven Days readers. If we were to edit out nominees who do, in fact, fit the criteria for voting (that is, having at least one Vermont-based member) but might be uninterested or too big to take an opening slot at GPN, we would be fascist monsters.

And the world doesn't need more of those. 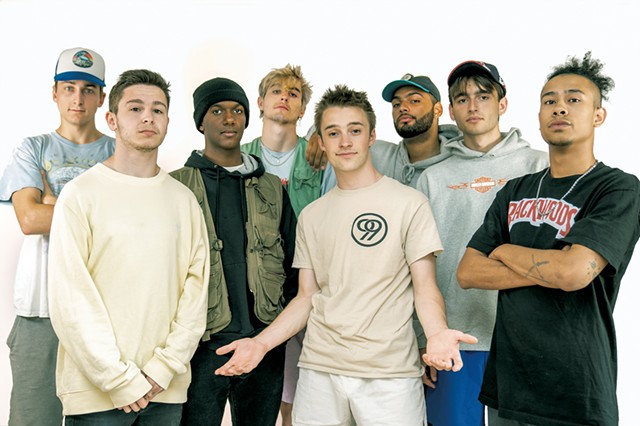 Probably the biggest music news to rock the Champlain Valley this year — and no, I'm not talking about the potential sale of Nectar's — arrived Monday morning. Youth-culture website Complex announced that Burlington hip-hop collective 99 Neighbors have signed a deal with Warner Records. One more time: Warner freaking Records! When you hear people refer to "the big three," they're taking about Warner Music Group (the label's parent company), along with Sony BMG Music Entertainment and Universal Music Group.

Despite joining one of the majors — notoriously corporate territory — 99 Neighbors' deal is "artist centered," according to the group's manager, Cal Rawlings. He said the group will retain ownership of all its music forever.

"Thanks to this new partnership, we have some new flexibility and resources," Rawlings said.

Be sure to check out the group's latest single and video, "Fake Pods." It debuted Tuesday on Zane Lowe's Beats 1 radio program on Apple Music.

And, if you haven't already, check out 99 Neighbors' killer debut album, Television, which dropped in January.

As mentioned above, legendary Burlington nightclub Nectar's, as well as sister space Club Metronome and the building that houses them, are for sale. When I saw the item posted on another local publication's website, I had a weird sense of déjà vu. That's because this exact thing happened in 2017: All three entities were put up for sale. So why was this breaking news again last week? The only significant update seems to be that the price for the businesses dropped significantly, from $700,000 to $300,000. We've reached out to representatives of Nectar's for more information, and we'll update you as soon as we know anything more.

How is it possible that we've gone from, on average, zero piano bar events per week to two in the same week? I'm referring to Nate Venet's pop-up at Wild Hart Distillery in Shelburne on Thursday, August 1, and Sarah Weinstein's Showtunes Karaoke event on Sunday, August 4, at Burlington's Light Club Lamp Shop. If you've got a hankering to belt out some show tunes or torch songs, maybe hit both?

Folk singer-songwriter Emma Back launches the She Sings Out Loud showcase on Friday, August 2, at Montpelier's North Branch Café. Stemming from Back's organization of the same name, which supports female singers, public speakers and performing artists, the event features Colorado-based singer-songwriter Maudlyn Monroe, plus locals Katie Trautz, Senayit and Back herself. The evening prior, Thursday, August 1, Back and Monroe perform scaled-down sets at the Hive on Pine in Burlington. 99 Neighbors

Yeasayer, "I Am Chemistry"