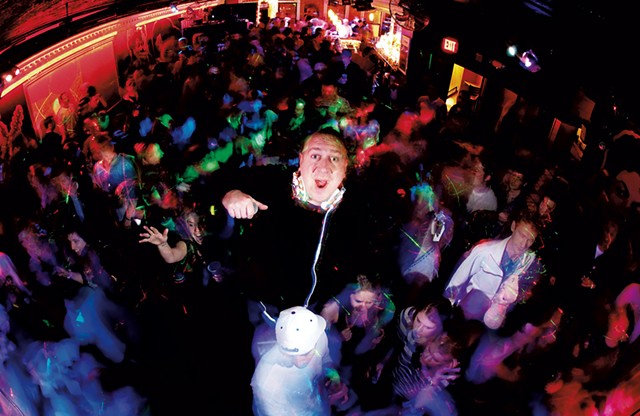 Greetings, kiddos! Since nostalgia is pretty much permanently on our brains these days, I want to draw your attention to a couple of noteworthy items that'll make you yearn for yesteryear — assuming you're old enough to have experienced yesteryear the first time around.

On Saturday, April 13, Kyle "DJ Fattie B" Thompson celebrates 20 years of hosting Retronome, Club Metronome's longest-running party. Since 1999, Thompson has kept the dance floor thumping with hits from the Donna Summer disco era to Beyoncé's early reign in the 2000s.

Originally, the night was the brainchild of former Club Metronome owner Anne Rothwell and erstwhile host DJ Craig Mitchell. He handed the reins over to Thompson after the latter ended his touring run as MC of the local acid-jazz/hip-hop ensemble Belizbeha. And though Retronome started out as primarily a disco and new-wave affair, about 10 years on, its repertoire began extending into the eclectic strains of the '90s and beyond.

In an email to Seven Days, Thompson deconstructed the current percentages. He says that he now plays 75 percent '90s and 2000s, with about 20 percent '80s and just a wee 5 percent from the '70s. That makes sense, given how big '90s culture is at the moment.

"I never would have thought that two decades later I would still be doing the night and would [have] written a book about the (mis)adventures I've played a part in along the way," Thompson writes. The book he refers to is I Was a 400 Pound '80s DJ: My Memoirs Through Music, which he published in 2015.

Here's a mind-bending fact: Retronome is a throwback dance party. But since it's now 20 years old, the event itself is retro. That means for people who raged in the early days of Retronome but haven't been back in a while — like me, for example — the very act of showing up to this weekend's event is a throwback. That's some meta shit right there.

Retronome will likely continue for years to come. And just think: One day, you could find yourself dancing to that brand-new song you love when the event eventually pulls tunes from the 2010s.

And speaking of nostalgia...

... a newly created local Facebook group deserves some recognition. It's called Burlington Vermont in the 1990s, and it's exactly what it sounds like. Founded a week ago by local chef Richard Witting of Firefly Catering, the public group caters to folks who recall the Queen City's scrappier days of the last great decade.

Since its creation, the group has gone somewhat viral, locally speaking. At press time, more than 300 people had joined. Dozens of photos now appear in the group's feed, such as a beautiful candid shot of Lois Bodoky, aka the dearly departed "Hot Dog Lady." Back before street food was chic, her humble hot dog stand was pretty much the only option for a quick, cheap bite on the Church Street Marketplace.

Posting to the group, Witting writes, "To some degree, I started this group because I actually don't love Burlington that much anymore. But I can't tell if that's because I've changed or the town [has] (or both). But looking at all these photos, I feel like it was a special time."

Personally, I can attest that it was a special time. And the group's members are charged up to share their experiences. Aside from catching a glimpse of some authentic '90s fashions, you'll see little bits and pieces of what Burlington's culture and music scenes were like back then. Members have posted show posters, shots of cassette tapes, zines and other ephemera.

For instance, one member posted a flier from Club Toast circa December 1995. The club, which closed in 1998, was the lynchpin of the local rock scene but also attracted national talent during its run. You can see that New Year's Eve '95 was a particularly rockin' show, with defunct outfits Chin Ho!, the Pants and Wide Wail ringing in 1996.

Another hot post from the group's first week: a cheesy AF rap music video produced by the Burlington Mayor's Youth Office that urges the kids to take public transportation instead of private vehicles.

If you want to relive your glory days, or take a peek at the Burlington that was, this is the group for you. I'll have to dig around my personal archives to see if I have anything to add. And I'm sure the Seven Days offices are full of good stuff.

Fans of jam outfits Mister F and Wild Adriatic should be pumped for an intimate set from keyboardist Scott Hannay on Friday at Orlando's Bar and Lounge in Burlington. But rather than play selections from the aforementioned bands, he'll plunk out reimagined themes from popular video games, such as The Legend of Zelda, Mega Man, Contra and Super Mario Bros.