One of the first messages I received after taking the music editor post last year had the subject line "Hey, Shithead." No "Nice to meet you" or "Hey, have you heard so and so?" Nope. Just a terse message accusing me of having feces for brains because I didn't cover a concert that the reader thought I should have.

While the vast majority of correspondence I've received has been very positive, this one stuck with me for a few reasons. For one, I'd been on the job for all of two weeks. I'm not even sure how he found my new email address at that point! Dude was ready.

The show in question was indeed a local all-star affair, one of those giant, how-the-hell-is-he-going-to-pull-this-off shows that Bob Wagner just loves to produce, with 20 musicians and amazing performances of classic songs. I remember reading the email, even skimming over the part where my public school education was called into question (Hey, I'll have you know that North Carolina is ranked No. 29 in public education in the U.S., sir! That's basically a B- as far as I'm concerned, and I'll take it!), and thinking, You know, this incredibly rude guy who just wondered if I 'even like to rock' actually has a point.

Not about me being a shithead — I'm a lovely guy, I swear! — but about the work and talent involved in these kinds of shows. Amid the colorful metaphors and f-bombs in his email, the reader stressed how lucky we all are to have musicians like Wagner — who, it should be noted, did not write the email — doing the hard work to make those big shows happen.

Well, Wagner is at it again, so this is my chance to avoid being bullied online. And to see a night of incredible music, of course. The über-busy guitarist, who is most often spotted onstage with Kat Wright and bassist Josh Weinstein in their current Americana-leaning format, is throwing another edition of his '72 Review concert. On Wednesday, November 16 — the day this issue hits the stands — Wagner and his massive collection of friends take over the Higher Ground Ballroom to pay tribute to what America was listening to half a century ago.

Wagner and company held the first '72 Review back in March at the South Burlington club. It was a rollicking affair featuring just about every big name in local music, including Josh Panda, Dwight + Nicole, Seth Yacovone, Craig Mitchell, Wright and so many others.

"When we did it last time, it was such a cool night. The vibe was incredible," Wagner told me by phone. He added that Higher Ground holds dates open throughout the year for him to produce shows, "so I knew we'd run this one back. We've still got an insane lineup," he went on, "but we're doing all new songs, no repeats from the last show."

"When I realized how close to Thanksgiving the show would be, I reached out to the folks at the Vermont Foodbank," Wagner revealed.

How does one get more than 25 musicians onstage for a series of charity gigs, you ask? Between the eternal conundrum of artists having to scrap for every dollar and the financially fraught state of touring post-pandemic, Wagner admitted that it's no easy feat.

"You have to get a little creative these days when booking stuff like this," he said. Which he did by securing AARP Vermont as a sponsor. While there's definitely a joke to be made about 50-year-old music being sponsored by AARP, the pairing makes too much sense to laugh at, especially considering the result is one hell of a loaded bill.

So be sure to pop over to Higher Ground for a night of killer songs played by some of our best talent. This shithead will be there.

Speaking of correspondence, perhaps you perused our Feedback section this week, starting on page 6? A recent online story I posted about the new Ben & Bucky's Guitar Boutique in South Burlington caught a little flak in two letters to the editor, including one from Nowa Crosby, the owner of Shelburne's Randolin Music.

Both correspondents were disappointed in my coverage of the new shop, particularly in my failure to challenge any assertion that Ben & Bucky's offers a type of service no longer found at other Burlington-area instrument retailers. As Crosby pointed out, his business, originally based in downtown Burlington, offers many of the same services as Ben & Bucky's and has been doing so for many years.

I'm not going to speak for everyone involved, but I'm pretty sure that Ben & Bucky's owners, Ben MacIntyre and Adam Buchwald, intended no more disrespect than I did. It was just passionate guitar people talking about what they do. That said, I have to concede Crosby's point.

It's on me to challenge assertions and provide other commentary, and I failed to do that here. I've patronized Randolin in the past. I even bought a Takamine acoustic guitar from Crosby years ago when he worked as house luthier at the late, great Calliope, an instrument shop on Main Street in Burlington.

So, take note. There are no bad guys here, and no one is starting luthier beef. (That would be the worst reality show of all time.) I just should have taken a few sentences in the article to shout out Randolin and Crosby's long history of serving the area. The good news? I'm doing that now. Check out Ben & Bucky's and Randolin, because you can never have enough gorgeous guitars in your life.

We have a new date and location for the Love, Kelly fall fest, which was originally planned for October 7 at City Hall Park in Burlington and called off due to safety concerns. Now taking place at the Higher Ground Ballroom on Friday, December 9, the show features a slate of up-and-coming Vermont hip-hop artists, including North Ave Jax, 99 Neighbors and Hakimxoxo.

"It's really special that we have overcome frustrations with the city and decided to team up for the greater good of the community," the Love, Kelly team wrote in an email from Burlington City Arts, which is coproducing the show. "This reschedule is a moment of unity for our City."

The original plan for a free, outdoor event became a subject of public concern because it had permits for no more than 300 people but seemed likely to draw higher numbers into the park. Now held at the club with a $5 ticket price, the sold-out show will donate all proceeds to a BCA fund that assists local artists in procuring studio space and equipment.

"These are young artists who care deeply about their community," BCA executive director Doreen Kraft wrote in a press release. "Helping to connect these artists to audiences has been an integral part of BCA's mission for 30 years." 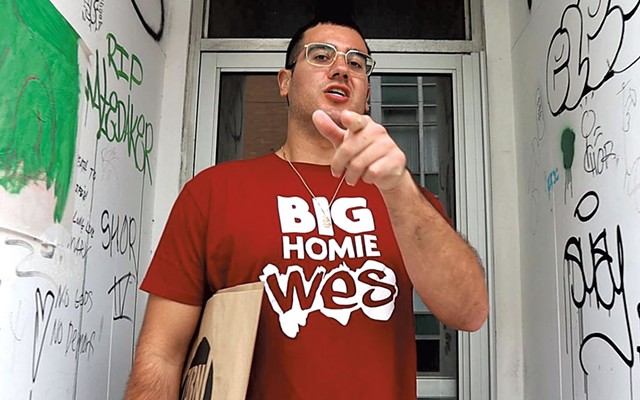 New videos dropping! First up is from Morrisville rapper Big Homie Wes. The MC celebrates his maturity and longevity with "Over a Decade." In the classic hip-hop-inflected joint, Wes' baritone flows easily over the beat as he lays down raps full of confidence and emotional maturity. "What I know has me wishing well for my rivals," Wes intones as he bops around Brattleboro. Shout-out to the Turn It Up! record store, which makes a cameo as Wes flips through the stacks. Check out "Over a Decade" on YouTube.

Father Figuer have released a video for the track "Garden," off their 2021 album Jack of All Fruits. Filmed by Ben Collins, band members Erin White, Elise Albertini and David Roche rock out in the woods, decked out in tuxedos, interspersed with shots of burning wood. Eventually, the musicians end up sitting on a bridge together and sharing a joint. Perhaps there's some meaning in that, as they've announced on social media that their latest record, a self-titled EP that dropped in October, will be their final project based in Burlington.

One can never be too surprised when a young band leaves town; it's almost a tradition here. But we'll miss Father Figuer and hope to keep hearing great things about them from afar.