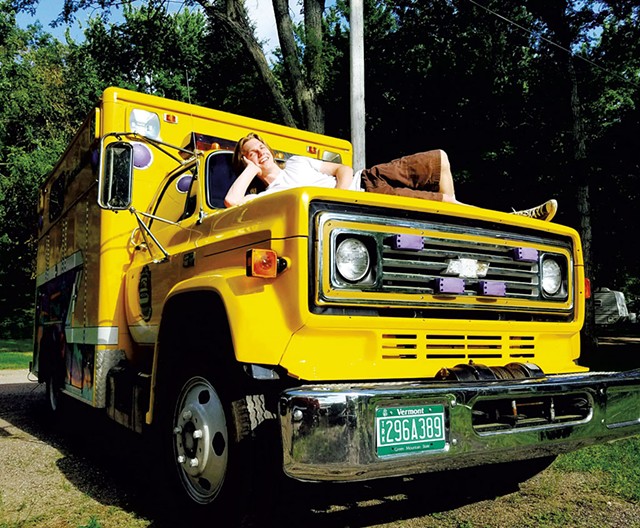 This weekend marks the return of the Nightshade Festival. Born out of electro-R&B wunderkind Guthrie Galileo's Nightshade Kitchen — a series of intimate, food-centric house concerts — the daylong fest heads into its second year on Saturday, June 23, at organic farm, nursery and wedding venue Red Barn Gardens in Williston. With a bill practically dripping with hot talent, the event promises to fill attendees' ears with tasty tunes. The fest will fill their gullets, as well, with sumptuous foodstuffs available for purchase within the festival's grounds.

Last year, the volunteer-run, indoor/outdoor shindig was an experiment of sorts. About a dozen mostly local acts performed — some in an adorable greenhouse setting and others right in the grass with the assistance of Sonic Steve's mobile concert venue (and former ambulance) the Jammbulance.

Nightshade Festival 2.0 features a higher percentage of nonlocal acts than version 1.0 did, including Montréal-based neo-R&B group Raveen. A little less than a year ago, the band was set to play Radio Bean but had to cancel last minute, much to my personal dismay. Any fans of smooth and contemplative acts like Rhye and/or Milosh out there? You'll want to catch Raveen's set. Harpist Marie Hamilton and experimental singer-songwriter Alexia Avina also make the trek down from MTL.

Why you gotta toy with us, dudes? The three-piece outfit released EP Drive Fast, Love Hard on June 1, then claimed its June 2 show at ArtsRiot was its "farewell." (See Seven Days contributor Chris Farnsworth's review of the EP.)

But then Bison cruised across Lake Champlain and rocked the stage at Plattsburgh, N.Y.'s Monopole on June 8 and dipped down to Philadelphia and NYC for what I can only guess was a pair of extremely sexy shows on June 14 and 16, respectively.

The long, drawn-out goodbye ends for realsies this weekend. If you missed any of Bison's "final" shows, their actual final show is at Nightshade. You know, until, like, two years from now when they stage a one-off reunion. Come on, we were all thinking it. But just in case that hypothetical homecoming never happens: You will be missed, Bison.

According to Galileo, sounds from the fest could be heard up to two miles away last year. To preempt any noise violations, the family-friendly event transitions into an acoustic-only affair after 10 p.m.

Check out the Nightshade Festival on Facebook for all relevant details.

I recently accomplished something I'd been putting off for a while: I chronicled my record collection with the help of online vinyl marketplace Discogs. To be fair, I don't have a particularly huge collection — due largely to the fact that I purged a lot of my wax before moving to and from California — so it wasn't an especially laborious task. But I had been procrastinating, and I'm pleased that I can check that off my to-do list.

Other than getting a rough ballpark of what my collection is worth, I mainly wanted to index my discs so that I could, um, buy more records. Hear me out: I can't tell you how many times I've been flipping through record shop crates only to pause and ask myself, "Do I have this Elvis Costello record already?" Not wanting to double down on My Aim Is True, I inevitably err on the side of caution and don't buy it. Then I get home and discover that I shamefully don't have that one, and by the time I get back to the shop, it's gone. Now I can just check my Discogs profile on my phone and find out then and there whether I already have Madonna's True Blue. (Answer: I do not!)

This is all a long-winded way of saying I'm psyched for the annual Burlington Record Fair on Sunday, June 24, because I'll finally be able to spot-check while shopping to prevent any duplicate purchases.

Sellers from the area and beyond convene at Nectar's for the one-day-only sale, which features a specially brewed craft beer from Winooski's Four Quarters Brewing. And for all you early birds out there: Anyone arriving in the fair's first hour should be prepared to fork over a few bucks for the privilege of getting first dibs.

Fans of bygone Burlington alt-rock band Envy should be stoked for a little something called "The Hutton-Toohey Disaster: 25 Years of Songs and Sounds." Envy's founders Matt Hutton and Sean Toohey (the Nancy Druids) team up for a night of nostalgia and all manner of rocking out on Saturday, June 23, at Radio Bean.

In addition to bringing back some sweet Envy cuts from the 1990s, the pair plans to bust out some jams from the Red Telephone — their post-Envy, Boston-based outfit — and will dig even deeper into the past, culling choice material from pre-Envy group Spray 9.

Balls to the Walls

June is National LGBT Pride Month, and queer-focused events are popping up all over the state — despite the fact that Vermont's official Pride celebration is actually in September. (More on that next week.) This week's hot ticket is the Proud AF Pride Ball at the Light Club Lamp Shop in Burlington on Saturday, June 23. With support from GLAM Vermont — a local support group and public health initiative for gay, bisexual and transgender dudes — the largely drag-centric event features performances from a number of local divas, including hosts Emoji Nightmare and Shani. The fab affair seamlessly transitions into resident vinyl DJ Taka's regular Saturday night gig. You better work!

Correction, June 20, 2018: An earlier version of this story contained an error about the Nightshade Festival. Food was available for purchase once attendees paid their entrance fee.