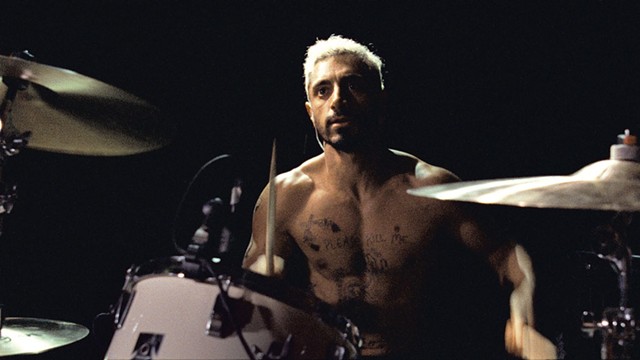 Our streaming entertainment options are overwhelming — and not always easy to sort through. This week, I watched director-cowriter Darius Marder's Sound of Metal, a quiet (literally) little film that snagged six Academy Award nominations, including Best Picture. Find it on Amazon Prime Video.

Ruben (Riz Ahmed) and Lou (Olivia Cooke) are a heavy metal duo who tour the country in a bitchin' Airstream. Onstage, his pounding drumbeats complement her shrieking, anguished vocals. Offstage, they cuddle in bed, listen to mellow standards and support each other through various forms of recovery.

Then one night, during a show, Ruben's hearing goes underwater. That's how it sounds to us, anyway — as if a gently churning ocean has muffled those pounding beats. A doctor tells him most of his hearing is gone, and it isn't coming back.

The stress of this news throws Ruben dangerously off balance. On the advice of his sponsor, Lou brings him to a bucolic addiction center for the deaf overseen by a weathered Vietnam vet named Joe (Paul Raci). Separated from his partner and the outside world, surrounded by people who communicate in American Sign Language, Ruben begins to "learn how to be deaf," as Joe puts it. But he still hopes that cochlear implants will give him his old life back.

When I wrote up a brief description of Sound of Metal for this paper last year, during its run at the Savoy Theater, I admit my first thought was Why? The experience of a young metalhead struggling with hearing loss seemed so niche that I couldn't see how the film would appeal to a broader audience.

I was wrong. Despite having been conceived and shot well before the pandemic, Sound of Metal meets our current moment with eerie serendipity. It's a story of how sometimes, when we think our lives are going one way, they veer off in another, and acceptance and adaptation are not the same as defeat. Ruben spends the movie learning that his disability isn't an obstacle for him to overcome but a new reality with which he must reckon, and that reckoning has its own rewards.

At the film's core is the standoff between Ahmed and Raci, both well-deserved Oscar nominees. While Ruben is a bullet of nervous energy, Joe does his best to slow the younger man down. He finds the "kingdom of God," he says, in the moments of stillness that Ruben's restlessness keeps him from experiencing.

During the scenes at Joe's retreat, viewers do experience that stillness, or at least a new relationship to their aural environment. Also Oscar-nominated, the film's sound design is immersive and transformative. We move from the ear-splitting volume of the metal show to the frustration of trying and failing to hear spoken dialogue, which we experience along with Ruben. (Marder leaves his perspective just often enough to ensure we know what's going on.)

When Ruben enters the deaf community and learns ASL (subtitled for non-fluent viewers), the quiet of his world gradually stops being maddening and isolating and becomes sociable and healing. The near-silent scenes between Ahmed and actual deaf actors leave a deep imprint, because we're watching someone develop a new kind of relationship to the world. And isn't that what recovery, or any form of personal transformation, is about?

Deaf critics have rightly pointed out that Sound of Metal presents deaf culture from a hearing person's perspective, and some take issue with the way the film depicts the fraught choice to use cochlear implants or not. The movie's structure wobbles in places, too, and Lou's character could be better fleshed out.

Yet Sound of Metal is a unique and powerful film, not just because its message of resilience resonates but because it makes hearing viewers more aware of an element of cinema that they tend to take for granted. Even in this medium where visuals dominate, sound and its absence have an almost subliminal capacity to shape our experience. The movie's breathtaking last scene could convince us that the still points in our lives are indeed where we find the sacred.

"Feeling Through" (2020; watch at feelingthrough.com): Nominated for a 2021 Academy Award, Doug Roland's 19-minute film about the chance connection between a homeless teen and a deaf and blind man stars Robert Tarango, an actor who is deaf and blind.

In the Land of the Deaf (1992; Kanopy, or rentable on Vudu): Nicolas Philibert's Peabody Award-winning documentary takes an in-depth look at the culture of the deaf in France.

Sound and Fury (2000; Docurama, rentable): Two brothers, each with a deaf child, disagree on the benefits of cochlear implant surgery in Josh Aronson's documentary. A sequel called Sound and Fury: 6 Years Later follows up on each family's choices.