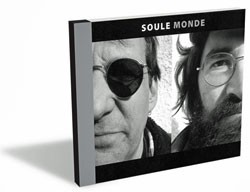 Soule Monde is the latest project from longtime co-conspirators and members of the Trey Anastasio Band, Ray Paczkowski and Russ Lawton. The result of years of collaboration and, most recently, forged in the fires of several Nectar’s residencies, the duo’s self-titled debut attempts to distill the energy and improvisational ferocity of a highly regarded live act into a record-studio setting. That can be a tall order, particularly in the groove-laden arena of progressive jazz, funk and jam music. But Soule Monde achieve a rare feat, delivering a record that honors the band’s improvisational DNA with inventive jams while taking advantage of the studio to highlight the duo’s signature compositional style.

Local audiences probably don’t need to be told that Paczkowski and Lawton are two of the area’s finest players. And Soule Monde — the album — should only fortify that reputation. From the first insistent beats of opener “Bernard,” Soule Monde are in lockstep. The strutting, ambulatory track delivers a complexity with organ and drums that many jam-oriented bands can only hope to offer with much more instrumentation.

Paczkowski’s playing throughout is inspired. He teases time-honored jam conventions and then, often with little warning, detours into far more interesting terrain. On “Miss Miriam” — a seeming ode to local songbird Miriam Bernardo — he drives a spicy, Latin-flavored progression through scintillating, hairpin turns. “Bootsy Bonham” centers on a sinister Clavinet groove that blooms into exultant Hammond swells. On “The Story,” Paczkowski sets a brooding atmosphere with simmering efficiency, playing no more or less than is called for.

While Paczkowski may be Soule Monde’s melodic mastermind, Lawton’s contributions are equally critical and just as impressive. He’s the band’s backbone. But he provides much more than simply the foundation for Paczkowski’s flights of fancy. Theirs is a natural musical kinship, and Lawton plays with such an exquisite sensitivity and startling force that he becomes an integral part of the tapestry. There is a profound symbiosis here that reveals itself further with each listen.

Soule Monde may still be best experienced in person; but their debut record is more than just an extension of the live act. It’s a stirring, groovy work that stands on its own as a cornerstone of Vermont’s improvisational jazz and funk scene.

Soule Monde celebrate the release of their debut album with a show this Saturday, November 17, at Nectar’s.