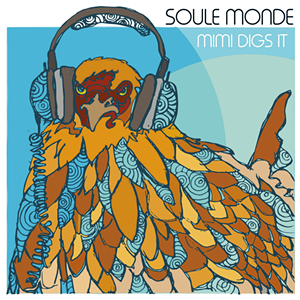 In some ways, Soule Monde's new LP, Mimi Digs It, is a miracle. Just a little over three years ago, the duo's keyboardist, Ray Paczkowski, went into surgery when a tumor was discovered on his brain. The operation was successful, and Paczkowski was soon able to return to his gig in the Trey Anastasio Band.

But in April, the band's bassist, Tony Markellis, died unexpectedly.

All of this makes Soule Monde's latest funk-splosion Mimi Digs It a triumph, and a celebration of the players' incredible partnership. Composed largely of organ and drums, the album is an unleashing of sound. You can practically picture it on a leash, pulling and yanking against a tensile strap that snaps as Soule Monde tear off into a wild green expanse.

Lawton and Paczkowski have a deep musical intimacy, built on decades of learning each other's language. They fit together like pieces of a laser-cut jigsaw puzzle, taking turns as star and support system.

On Mimi Digs It, the pair does a lot with a little. Lawton and Paczkowski consistently find themselves in a groove in complex compositions built of the same few materials: Clavinet, Hammond and Wurlitzer mixed with drums. At times, a listener might feel like a fly on the wall at Waitsfield's Sugarhouse Soundworks, where the eight tracks were recorded. The album was made somewhat improvisationally, with one player coming up with a loose idea or concept and the other responding to it. It's a classic example of the fundamental improv maxim "yes, and..."

Fans of instrumental jam-funk should prepare for their pleasure centers to be activated, even overloaded. First cut "Tiny Land" is a growling beast that conjures earthly forces. Its low valleys of drum and sharp peaks of organ are anything but tiny.

"Gateway Drug" opens on a Clavinet speedway, with Paczkowski's fingers working overtime. The song jackknifes from high-energy beats to pockets of soft, serene keys and back again.

"Ollie '88" percolates and stammers. Its chunky rhythms, both on drums and keys, create a mid-album cooldown before two pumped-up bangers close the record with charisma and attitude: "They's a Balkan Dog" and "The Nail."

Mimi Digs It shows that Lawton and Paczkowski are an indestructible team. All players should be so lucky as to find their other half.

Mimi Digs It is available at soule-monde.bandcamp.com. Soule Monde perform at the Burlington Discover Jazz Festival on Saturday, June 5, at the City Hall Park Stage.