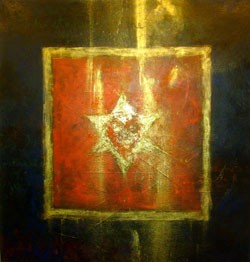 Artists’ statements often obfuscate rather than enlighten, but the current four exhibitions at Burlington’s Artpath Gallery are accompanied by fairly descriptive ones. Aside from occasional technical references, the three painters and one photographer reveal a spiritual subtext to their work.

K. Lenore Siner cites studies of “yogic philosophy” and “modern shamanic practices” in her statement. Her painting “Bluebird Anahata” is a 24-by-24-inch canvas presenting a rising blue bird superimposed over a traditional 12-petaled Anahata chakra. The green flower of the chakra fills Siner’s dark background. Art Nouveau sensibilities are revealed in her 15-by-15-inch “Self Portrait.” A well-drawn view of the longhaired artist’s face, looking downward and surrounded by vines, leaves and flowers, is delineated with lines reminiscent of cloisonné enameling. Siner divided shapes into flat patterns over a pale-yellow background; such divisions appear in all of her works.

Photographer Willa Mamet (daughter of playwright David) decries the “unnatural” immediacy of digital photography; instead, she finds personal meaning in “living through the stages of the actual process” of traditional photography. Her 11 black-and-white photographs possess strongly contrasting values, and her compositions are simplified yet extremely effective. “The Road Home” is a 20-by-24-inch nocturne looking out through a speeding automobile’s windshield and onto a roadway curving to the right. The few illuminated lines of the road are silvery, while all else is onyx black — except for a small, bright moon illuminating a cloud in the upper right corner. Mamet seems to marvel at the way images reveal themselves in the darkroom. She writes: “The mystery teaches me patience, dedication, perseverance.”

A paradoxical quote from Lao Tzu begins Joellen Mulvaney’s artist’s statement: “When all the world recognizes beauty as beauty, this in itself is ugliness.” Her part of the show is entitled “Ugh-ly Beauty.” Mulvaney’s 14-by-22-inch pastel on paper, “Passionate Non-Attachment,” is a lively composition filled with scattered ornamentation and visual textures. A brown-over-blue mass at upper right floats toward red and yellow areas patterned with white and indigo lines. Mulvaney notes, “Authentic nonobjective images are not an abstraction of anything.” The sheer joy of mark making seems to direct her work, rather than preconceived narratives or aesthetic diktats.

Mulvaney’s 11 oil paintings on linen are heavily textured, with paint nearly an inch deep in some areas. “Chiron Emerging from the Veil of Tears” is a nonobjective work with a bright-white pile of paint at left, surrounded by deep greens and a brown area as rough as tree bark.

Painter Joy Spontak contextualizes the title of her portion of the exhibition, “Reimagining Memory,” with a quote from French philosopher Gaston Bachelard. It says, “All memory has to be reimagined . . . illuminated by the bright light of imagination.” Spontak’s five mixed-media oils on canvas and one mixed-media piece on paper are further informed by Jewish mysticism. She specifically cites a study of the Kaballah, as well as a “spiritual alignment” with the Golem series by Burlington printmaker David Sokol.

Spontak takes some of her titles, and subject matter, directly from kabbalistic teachings. She uses rich fields of color and often defines shapes with gold leaf and powdered metallic pigments. “Toward a Reconciliation of Water and Fire,” a vertically oriented, 36-by-24-inch canvas, presents viewers with a sumptuous orange color field with two triangles: one pointed up, the other pointed down. These represent fire and water and, when reconciled and combined, become a Star of David. “The Mystery of the Reversal of Light” is a golden, six-pointed star centered in an orange square. The square is surrounded by darkness, although powdery golden dust suggests the star is shimmering.

All four of the Artpath artists approach the mysteries of creation by making art: Spontak and Siner within metaphysical narratives; Mulvaney and Mamet through what the photographer calls an “emotional experience of the Universe.” All four are strong technicians, but for these artists, technique without soul isn’t an option.